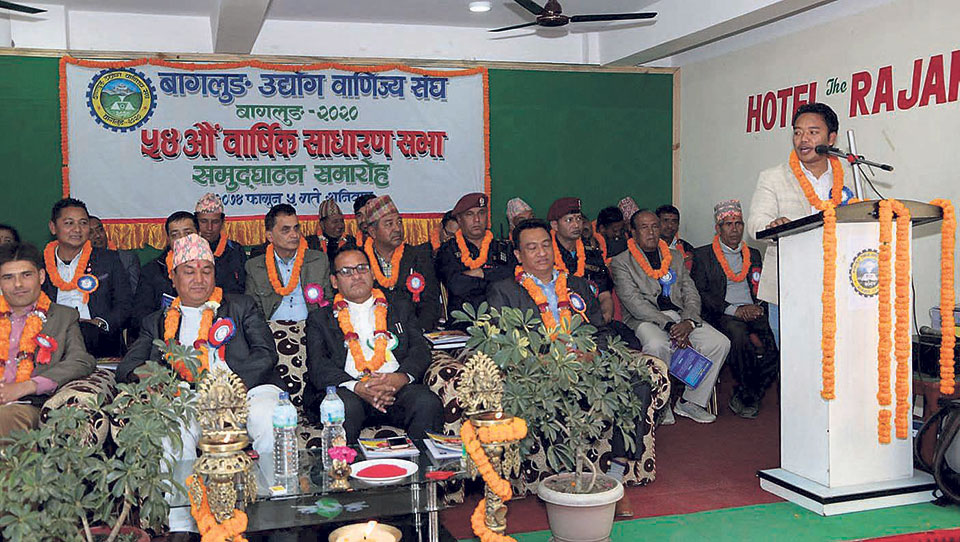 BAGLUNG, Feb 19: Government officials and businesspeople of Baglung have stressed the need to make Baglung an economic hub.

Speaking at the 54th Annual General Assembly (AGM) of Baglung Chamber of Commerce and Industry (BCCI), local stakeholders highlighted the possibilities of expanding industrial sector to make the district a hub for economic activities. “Baglung can be an economic hub if the private sector plays its role actively as per the three pillar policy of the government,” Rajendra Dhungana, coordinator of District Coordination Committee, Baglung, said.

“Expansion of trading activities in rural areas is a positive indicator. This has opened up new opportunities in the district.”

Other speakers said investment in tourism and hydropower is the key to make the district an economic hub in the region. “Baglung has immense hydropower potentials. Large-scale investors can invest in this sector,” Nirman Kumar Shrestha, central member of Federation of Nepal Chamber of Commerce and Industry (FNCCI), said. “Similarly, small-scale investors can invest in tourism sector.”

Jayaram Bhari, president of BCCI, said tourists footfalls in the district will increase if Dhorpatan Hunting Reserve is promoted effectively in national and international markets.
Other speakers said that the local and provincial governments should assure businesspeople on security of their investments. They also said infrastructures like road access and electricity, among others, is essential for businesses to flourish.

“Upon completion, Kaligandaki Corridor and Mid-hills Highway are expected to open up new avenues for economic development in the district,” Shrestha added. “Economic activities will flourish further once the Kora La trading point between Nepal and China comes into operation.”

Similarly, Basanta Kumar Shrestha, former president of BCCI, said investors are ready to put their money in any place if local units assure security of their investments.
The annual general assembly saw participation of government officials, politicians, businessmen, civil society leaders, and journalists, among others.

KATHMANDU, July 12: With the ever - passionate participation of students in the activities of the Central Zoo, the need... Read More...