Citizenship a far cry for most Madhesi daughters-in-law 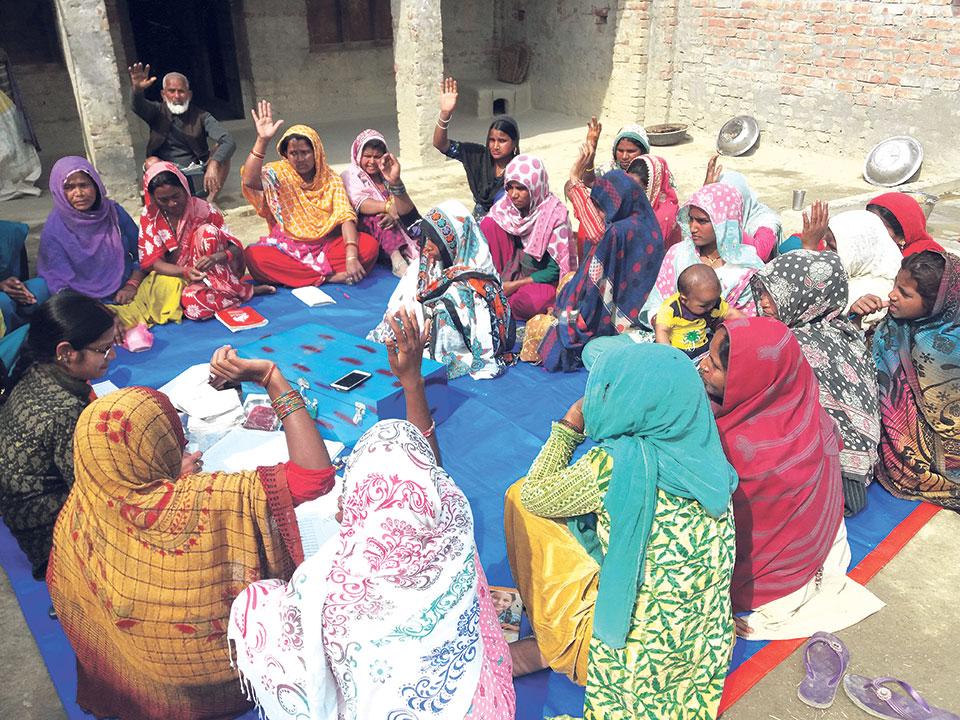 At a gathering on Monday, married women at Piprahawa of Janaki Rural Municipality ward number 6 raise their hands to indicate that they don’t have citizenship certificates.

KOHALPUR, March 6: Hasartjaha Darji, 45, of Janaki Rural Municipality, got married some 25 years ago. She has four children aged 11 to 19 years . She is now a grandmother as one of her daughters already has a child of her own.

Six elections for parliament, constituent assemblies and local bodies have taken place since Darji got married. But  she has never been able to vote as she has no citizenship certificate.  Her husband, Bahid Ali, has his citizenship card and votes in all the elections.

Her story does not end there. With no citizenship, she has no  bank account and she has not been able to deposit any money at the local savings and cooperative groups either. Several political leaders have come to canvas  her vote. They  teach  her how to cast the ballot  error-free . But they have never helped her acquire her  citizenship.

"I want my citizenship," she said adding, "But I remain deprived  as my husband has not obtained our marriage certificate."

Jyoti Lodh, 25, of Piprahawa  has a similar problem. She got married at the age of 15 and has a seven-year-old son. But she remains without citizenship. "I asked my father-in-law and mother-in-law to help me get my citizenship but my wish  has not materialized," she said.

Lodh says she cannot quarrel with the  family  to press for her citizenship card. But without the citizenship she is not able to join the voter roll. She could not vote in the Constituent Assembly elections held in 2008 and 2013 or in the recent three sets of elections. "Other locals go to the polling booths and celebrate with the victors once the vote counting is complete. But I hide myself inside the house," she said.

Another Piprahawa woman, Tajrun Teli, also complained that she remains deprived of  citizenship even after eight years of  marriage.  The 26-year-old is already a mother of two .
She has been urging her father-in-law and mother-in-law to help her get the citizenship card but they have not taken it seriously.

Married women in Piprahawa said they remain without citizenship cards even decades after marriage. Some of them have died without  citizenship .

Suresh Yadav, ward chairperson of Janaki Rural Municipality-6, said, "As many as 55 percent of the daughters-in-law don't have citizenship.

"We have announced that birth certificates, marriage certificates  and recommendations  for citizenship will be provided without charging any fee. Still, they don't  come to the office for those vital documents," said Yadav adding, "It is not easy to provide citizenship to daughters-in-law in Madhes."

This has deprived them of their democratic rights and they cannot open bank accounts or claim a share of parental property.
Woman activist Mohamadi Siddhiqui  said most daughters-in-law in Madhesi communities are deprived of  citizenship cards. "When I go to the villages most of them complain of not getting citizenship cards and it is the family members who are largely responsible for this."

Records at Banke District Election Office show that fewer women are registered in the voter rolls  compared to the population . Election officials attribute this to lack of citizenship .

KATHMANDU, Dec 8: Parliament's State Affairs Committee (SAC) is to ask the Home Ministry how many certificates of citizenship by birth... Read More...

Third sex should be provided citizenship based on gender orientation: Chaudhary

SINDHULI, April 10: The Blue Diamond Society (B DS), an umbrella organization of the LGBTs, has claimed that there are... Read More...