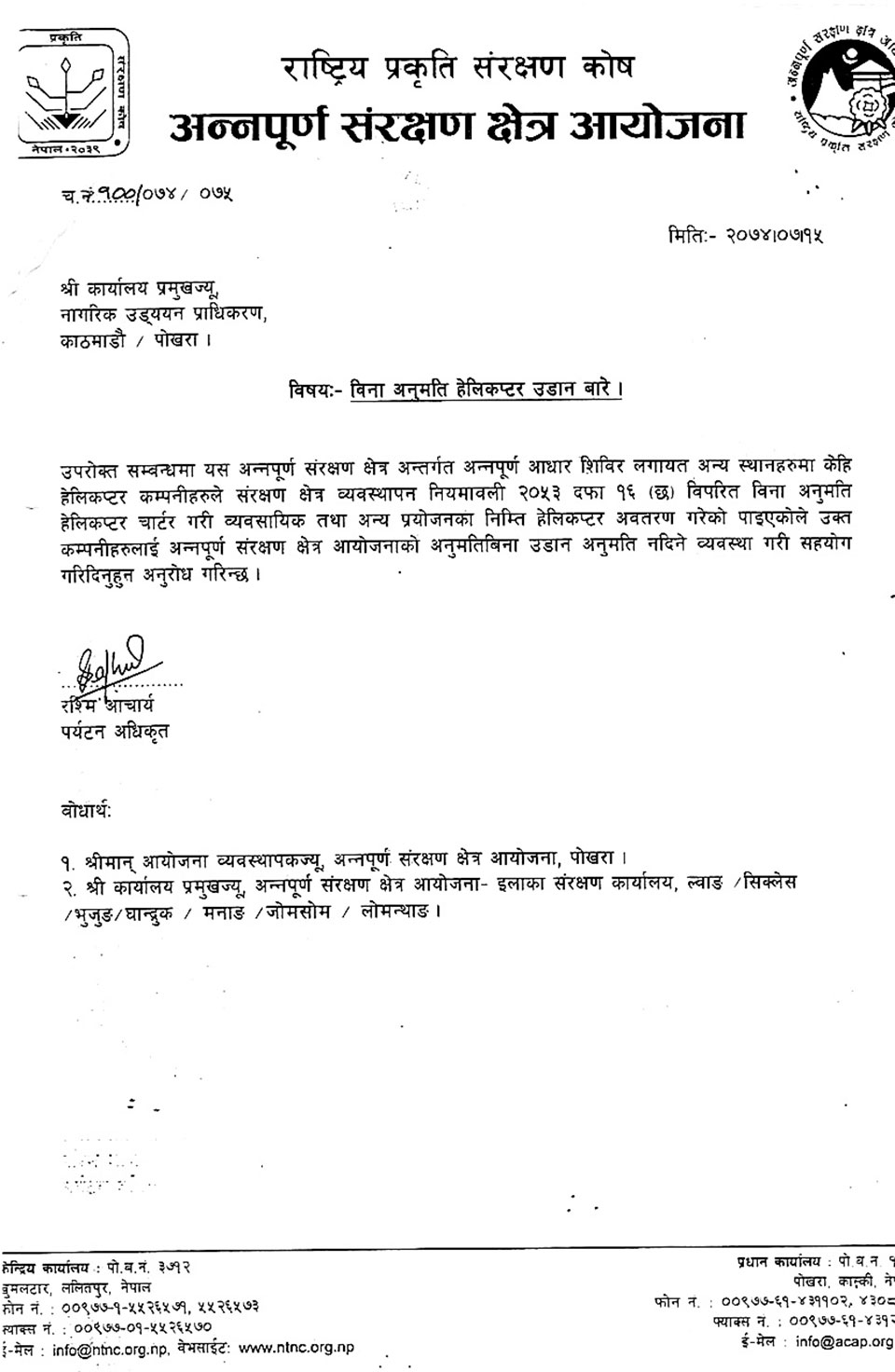 KATHMANDU, Nov 2: It has been found that helicopter companies are operating commercial flights to Annapurna Base Camp without taking permission from the Annapurna Conservation Area Project (ACAP).

Rashmi Acharya, tourism office at ACAP Pokhara Office, told Republica over phone that Simrik Air and Prabhu Air, among others, are operating commercial flights to the area without taking permission from ACAP.

As per existing rules, any flight -- except those for rescue purposes -- must seek permission from ACAP and pay a fee of Rs 2,000 per flight before operating flights to the protected area. However, following a rescue, helicopter companies must pay the required fee.

“We have found that helicopter companies, including Simrik Air and Prabhu Air are flying tourists to the Annapurna Base Camp directly without taking permission from ACAP and paying any fee,” Acharya added.

ACAP on Wednesday wrote to Civil Aviation Authority of Nepal (CAAN), drawing its attention toward such illegal flights. In the letter, which has been seen by Republica, ACAP has sought the help of CAAN and the Civil Aviation Office Pokhara to prevent operation of such unauthorized flights in the conservation area in the future.

In its letter, ACAP has cited Rule 16 of ACAP Rules, 2053 which bars helicopters from operating flights in the conservation area without permission.

Some helicopter companies are regularly operating commercial flights to the Annapurna Base Camp in recent weeks.

Some tour operators have joined hands with helicopter companies to floated ‘Breakfast at the Base Camp’ package for foreign tourists.

“We have also received complaints about helicopter flights from some locals,” she added.

There is good news for people who want to visit Annapurna Base Camp, as a new trekking route has been... Read More...

Documentary of first DJ performance at Everest Base Camp

The documentary of the first DJ performance at the Everest Base Camp, ‘Soundtrek: A Journey to Mount Everest’ is screening... Read More...