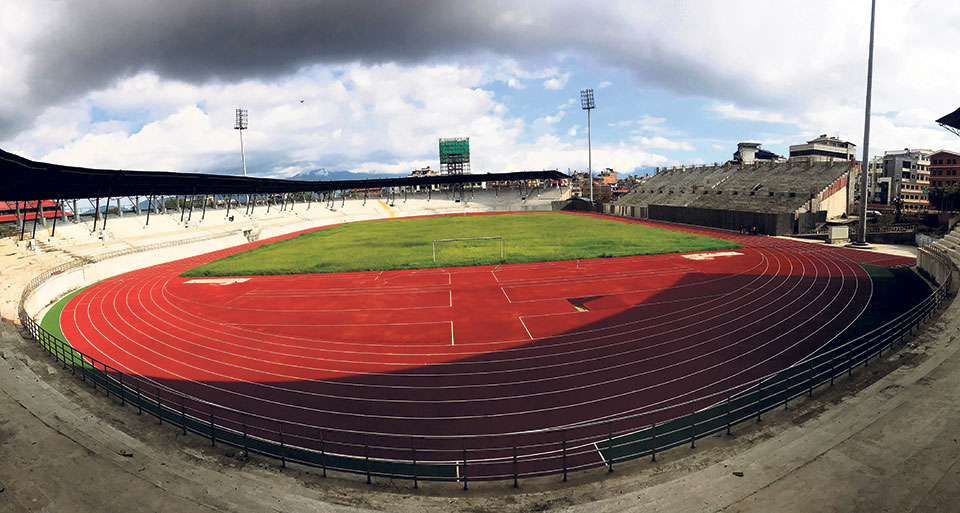 A view of the under-construction Dasharath Stadium in Tripureshwar in pictured in this recent file photo. Photo: Republica

KATHMANDU, Aug 11: The visit of a Chinese government team that was scheduled to arrive in Kathmandu on Saturday to inspect the under-construction sports structure in Nepal has been postponed for five days.

“The Chinese team was scheduled to come to Nepal today. But, their visit has been postponed for some days,” Silwal said, adding, “I have been informed that they will arrive in Nepal on August 15.”

The Chinese government officials will hand over the structure being constructed in Kathmandu to Nepal only after the team conducts an official inspection.

China couldn’t hand over the structure to Nepal in time as Nepal failed to complete its construction works in time. China provided financial support worth Rs 1 billion for the construction of the Dasharath Stadium at Tripureshwar and Swimming Pool and Shooting Hall at Satdobato, Lalitpur.

With the financial help of China Railway 14th Bureau, the different structure of the Dasharath Stadium was constructed. The China Railway constructed synthetic track and installed floodlight, digital scoreboard and sound system in the stadium. But, as Nepal could not complete the construction of roof of the VIP parapet, the Chinese side also couldn’t complete its task of installing the sound system on time.

A Nepali team is scheduled to go to China to inspect the equipment to be brought to Nepal.

Nepal is bringing tensile fabric from China and other required equipment for the construction of roof of the parapet from India.

NSC’s Physical Infrastructure and Construction Department’s Chief Arun Upadhyaya informed that it requires an additional budget of around Rs 330 to 340 million to construct the entire stadium. Fitting seats in the parapet and construction of the north gate and pavements are yet to be completed.

The previous strength of normal parapet of 15,900 seats in the stadium has been retained, while a total of 1,000 seats have been deducted from the VIP parapet.

The construction of Satdobato’s Swimming Pool and Shooting Range has been almost completed. The NSC aims to hand over the remaining re-construction works of the Dasharath Stadium to the Chinese Company on November 1. The 13th South Asian Games (SAG) will be inaugurated in the same stadium on December 1. Nepal national football team will also be playing its four home games of the FIFA 2020 World Cup Qualifiers (AFC) at the same stadium.