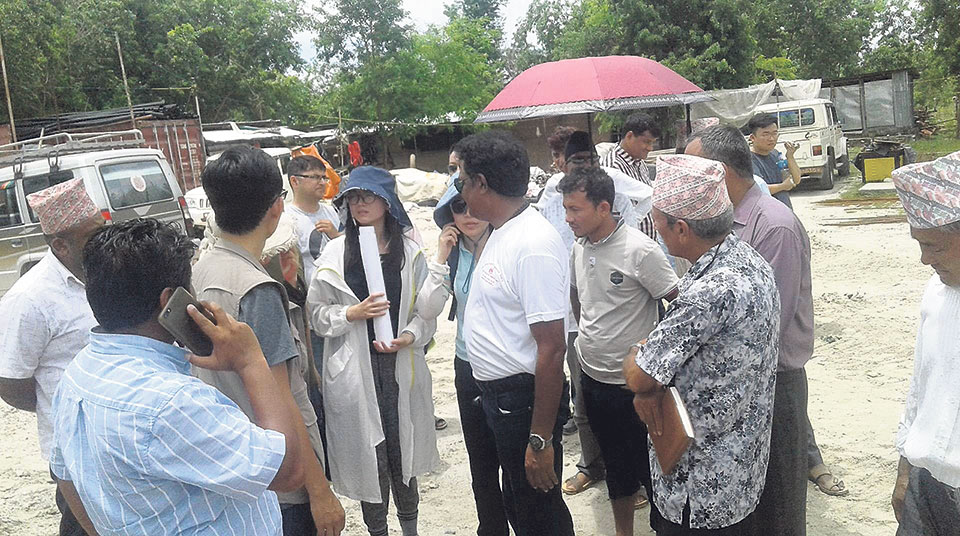 DAMAK, JULY 27: Chinese investment has been pouring in in Jhapa, Prime Minister KP Oli's home district, in recent times. After facing widespread criticism for his 'negligence' to development works in his district, PM Oli has come up with a surprising plan for development now.

Even though the plans are still in the implementation stage, what has caught everyone's attention is that most of the plans are being funded by Chinese investors.

The entire project of construction of an Industrial Park encompassing 2,200 bighas of land is being funded by China. Compensations are being paid for the acquisition of land for the project. Similarly, the construction project of the world's largest statue of Buddha and a Buddhist University in the district is also being funded by China although some portion of the fund is being covered by South Korea and Myanmar as well.The deal struck by Oli during his China visit has also ensured the construction of dam and embankments in all the rivers in Jhapa through Chinese investment. A Chinese technical team has already concluded an inspection of the rivers in the district.

Altogether 942 bighas of land have already been acquired by the Industrial Park Management Limited (IEML) for the construction of the Park and a notice has already been published for the acquisition of another 366 bighas of land.

Nanda Kishor Basnet, chairman of IEML, said that even though the acquisition process has been completed for 942 bighas of land, the compensation is yet to be distributed. “Now the local level evaluation committee will carry the works forward,” he said, “We will distribute the compensation according to its report.” Basnet added that the Rs 320 million allocated for the compensation in the last fiscal year will be used in the process.The construction works for the industrial Park will only be initiated after the acquisition of the land required for the project. However, locals have expressed their dissatisfaction over the pace of work claiming that only rumors about the construction of the industrial Park have been surrounding them and no action has been taken.“There have been rumors about the construction of the park for three years now, but no work has been done,” a local, Hari Krishna Neupane said, “If works are actually carried out, it would be very helpful to the locals.”

Similarly, the Detailed Project Report (DPR) has already been carried out for the construction of the world's tallest statue of Budhha in the district. Works related to land acquisition have already been concluded for the construction of the proposed 542 feet tall statue. The statue construction project will have a budget of Rs 15.75 billion and will cover 265 bighas of land. But, since the proposed area for the construction also has a community forest, difficulties have arisen in the project. According to a source at the municipality, the project needs green signal from the federal government in order to acquire the land of the community forest. The municipality informed that further process for the acquisition of the land will only continue after a discussion with the donors.

PM Oli, who has been making promises to construct embankments and dams along the Ratuwa and Mawa rivers during his every election campaign but he has not been able to do much. Even though some works have been carried out, they have not been satisfactory. But with the deal struck with China for the construction of embankments and dams in all the nine rivers in the district, Chinese officials have returned to Kathmandu, according to Som Portel, chief of the District Coordination Committee of Jhapa.

Chinese team inspected the embankments of Kankai, Biring, Kamal, Satasi, Mawa among other rivers. Hom Bahadur Thapa, PM Oli's Public Relations and Development Expert, said the Chinese team will submit a report to the Nepal government. Based on the report China and India will initiate permanent embankment construction works.

Representatives from China Communications Company had visited streams along Nepal-India borders and inquired loss caused by floods during the rainy season.

KATHMANDU, Dec 29: Chinese investors have registered 17 companies in Nepal in the first four months of Fiscal Year 2017/18 to... Read More...