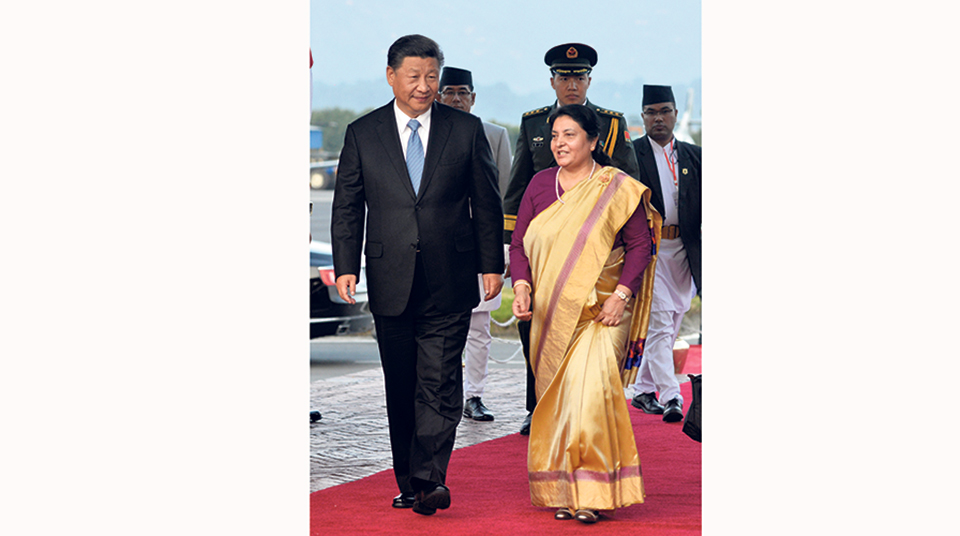 KATHMANDU, Oct 13: Visiting Chinese President Xi Jinping has assured to help Nepal to transform itself from a ‘landlocked’ to a ‘land-linked’ country by developing Trans-Himalayan Multi-Dimensional Connectivity Network.

Addressing the state banquet hosted by his Nepali counterpart Bidya Devi Bhandari in his honor in Kathmandu on Saturday evening, President Xi also assured to further enhance connectivity between the two countries by opening up additional entry points.

“We will develop Trans-Himalayan Multi-Dimensional Connectivity Network and help Nepal to realize its dream to transform itself from landlocked country to land-linked country,” said Xi.

President Xi said that Nepal and China have decided to establish a strategic cooperative partnership relation to drive forward the country to the path of development and prosperity through mutual cooperation.

“I am very happy that I could develop a new blueprint of Nepal-China relation in consultation with Nepali leaders during this visit,” he said, while adding that he intends to discuss further on issues of bilateral relations and other issues of mutual interests during his meeting with Prime Minister K P Sharma Oli on Sunday.

On the occasion, President Xi also announced to encourage as many Chinese tourists as possible to visit Nepal to help make Visit Nepal 2020 campaign a grand success. While stating that China has been actively supporting Nepal’s reconstruction works in the aftermath of the major earthquake that rocked Nepal in April, 2015, President Xi also said that China is keen to ensure multi-dimensional cooperation with Nepal.

Also addressing in the state banquet function, President Bidya Devi Bhandari had said that the desire of Nepal to have cross-country railway with China will soon materialize. While stating that Nepal attaches high importance to its relations with China, President Bhandari said that Nepal expects foreign direct investment from China in various sectors including hydropower and major infrastructure projects to materialize its dream to graduate from Least Developed Country to Developed Country by 2030.

According to the state-owned Nepal Television President Xi announced during the meeting to provide financial assistance of around Rs 56 billion to Nepal between 2020 to 2022.

Although no specific details of the agreements are forthcoming from official channel, high on the agenda, according to sources, are agreements to prepare Detailed Project Report (DPR) of Nepal-China Railway, develop a 762-MW Tamor Hydropower Project and to establish Madan Bhandari Science and Technology Academy named after late communist party leader Madan Bhandari. The two countries are also set to reach agreement for upgrading Rasuwa-Kerung Road and Tatopani-Kathmandu Road.

Similarly, Nepal and China are also set to form a high-level mechanism to expedite implementation of trade and transit agreements reached earlier with China. Agreements on soft loan for the construction of the East-West Railway, three North-South corridors namely, Koshi, Gandaki and Karnali and development of a 400-KV Galchhi-Rasuwagadhi Cross-Country Transmission Line are also among the likely between Nepal and China.

KATHMANDU, Oct 13: Chinese President Xi Jinping was given a warm welcome by the government and the people as he... Read More...

Nepal-China ties: Vistas past and future

China has only enthusiastic well-wishers in Nepal. However, they fall into two categories. The first are naïve type, who think... Read More...