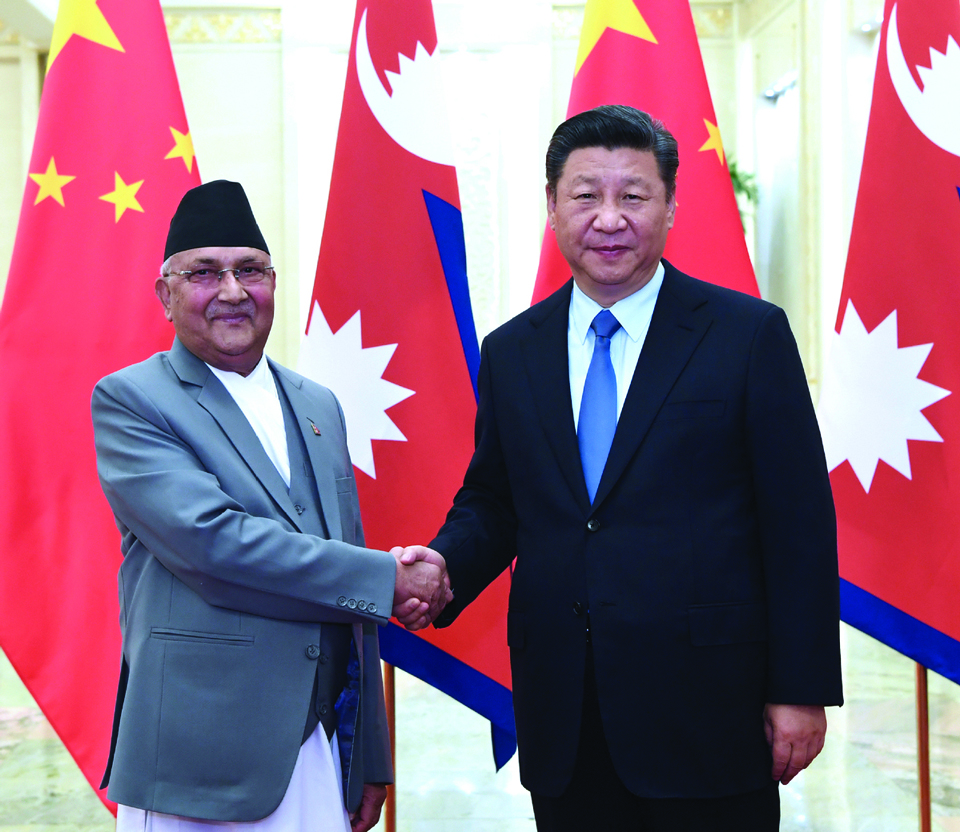 Without doubt, Prime Minister KP Oli’s visit to China has heralded a new era of Sino-Nepal relations in the 21st century world. The two countries agreed to execute several projects under Belt and Road Initiative (BRI) that included roads, railways, oil and gas exploration, cross-border transmission lines and billion of dollars of investment in various areas within overarching framework of Trans-Himalayan Multi-Dimensional Connectivity Network. One of the significant achievements was firm commitment and assurance by Chinese President Xi Jinping for building cross-border railway connectivity linking Kerung with Kathmandu. The visit has provided several strategic avenues for Nepal but Nepal should be cautious about China’s increasing strategic and foreign policy convergence in Nepal and guard itself against any form of ‘interference’ into domestic politics.

Officially, China employs ‘Good Neighbor Partnership’ concept of Sino-Nepal relations to achieve its foreign policy and strategic goals in Nepal. This normative concept stresses the need for China and Nepal to establish and maintain relations based on ‘sincerity’ and ‘honesty’ to coordinate and link policies, to remain flexible in relations, and to quickly respond to conflicts that arise between the two states. China draws on this normative approach to achieve four key policy outcomes. The first is the establishment and maintenance of government-to-government relations. Second is related to widening of economic linkages between the two states by building trade relations, expanding Chinese aid and technology transfers to Nepal, establishing joint venture activities in Nepal and continuing foreign direct investment in Nepal. The third is the deepening of cultural, education, and science and technology exchange and cooperation. The fourth concerns use of traditional Nepal–Tibet relations to advance overall Sino-Nepal relations. This policy reflects on 14-point join statement as well.

China perceives three overarching foreign policy and strategic concerns vis-à-vis Nepal: regime survival, territorial integrity, and domestic stability. Tibetan issues have an impact on all these three cases for China. Regime survival is the foremost concern of Chinese Communist Party (CCP), and party leadership is acutely aware that their success hinges upon the satisfaction of the Chinese people and the government’s ability to protect Chinese national interests. China has invested billions of dollars to develop Tibetan Autonomous Region since the turn of the century and is very sensitive towards any kind of interference in Tibet. Thus far, its Nepal policy has been crafted essentially to address Tibetan question. One of the significant outcomes of this policy, for instance, is the institutionalization of the security mechanism from 2010 onwards, under ‘Nepal–China Border Security and Law Enforcement Talks’. Chinese have increasingly focused its attention toward Nepal’s security forces, mainly on Armed Police Force, which has the mandate to look after Nepal-China border security posts. The construction of APF academy is part of its strategic appeasement. China assured full support to enhance capacity building, training of Nepali security personnel to be deployed across the northern border, and sought Nepal’s commitment on information sharing on anti-China activities with effective law enforcements mechanism to contain the free Tibetan activities.

China is deepening level of economic engagement with Nepal with focus on building strategic infrastructure roads, railways, highways and hydropower projects. This will certainly impact India’s security interests as well, as it would allow the Chinese to monitor India’s activity closely in the border region of Nepal. India should be fully assured that Nepal’s foreign policy is focused on building bridge between China and India and it will not promote any anti-Indian activities from its territory.  Moreover, China’s claim of Arunchal Pardesh as a part of south Tibet have significant bearing on India’s ‘Himalayan frontier policy’ with significant geo-strategic implications for Nepal. This has created frictions between India and China time and again. The recent ‘Doklam’ crisis brings to attention the importance of Himalayan countries for strategic calculations of India and China. Little wonder, India is still not the part of BRI initiatives as it perceives it as a Chinese strategy of encircling India.

Current levels of engagement suggest that the principal factor driving China’s Nepal policy is internal: Managing the Tibetan issue through expansion of BRI projects in South Asia including Nepal. Arguably, Beijing’s Nepal policy and the Tibetan problem are an integrated issue, and China seeks to address both issues through ‘new periphery strategy’, which has been mainly devised to address the domestic security concerns through periphery consolidation. This periphery consolidation is happening internally with rapid development in Tibetan Autonomous Region, which is critically oriented toward infrastructure development, militarization, Hanization, resource extraction and so on.

On the other hand, China has pushed “Develop West Strategy” by recrafting its Nepal policy. China believes South Asia represents one of the main overseas investment opportunities and an outlet for Tibetan trade and transit. For this, road and railway connectivity through Nepal could provide China the much needed overland channel to access South Asian markets, especially large Indian states of Bihar, West Bengal and Uttarpradesh. China foresees strategic dividends from the Kerung-Kathmandu railway connectivity for Tibetan Autonomous Regions’ trade and prosperity.

Non-interference in Nepal is at the core of these approaches.  This is motivated by Tibetan issues and BRI activities.  It very much reflects on China’s keenness on seeking Nepal’s commitment in abrogating ‘gentleman’s agreement’ whereby Nepal has to prevent Tibetans from travelling to India via Nepal and stop facilitating their transit. This concern was politely conveyed to Oli through unofficial channels during the visit.

China has been seeking ‘Treaty on Mutual Legal Assistance in Criminal Matters’ and ‘Treaty on Extradition’ similar to Nepal-India extradition treaty which facilitates the prevention of any anti-China activities from Nepali territory. This has been clearly mentioned in 14-point joint statement. Lastly, subdued response from Chinese side on financing modality of Kerung-Kathmandu railway shows Nepal could fall into Chinese ‘debt trap’ like Sri Lanka.

Prime Minister’s visit has opened much required strategic space for Nepal. But Nepal should be careful in balancing its strategic partnership with China and ensure that Nepal’s quest for strategic autonomy is not going to be compromised. KP Oli should ensure that Nepal will benefit from BRI and won’t fall in debt trap, while at the same time ensuring that it remains strongly committed toward protecting the rights of Tibetan refugees. This is going to be a tough balancing act for Nepal.

The author is PhD Researcher at University of Fribourg, Switzerland

KATHMANDU, Nov 8: As his participation in a function in Goa, India, which was reportedly attended by a Tibetan leader also,... Read More...