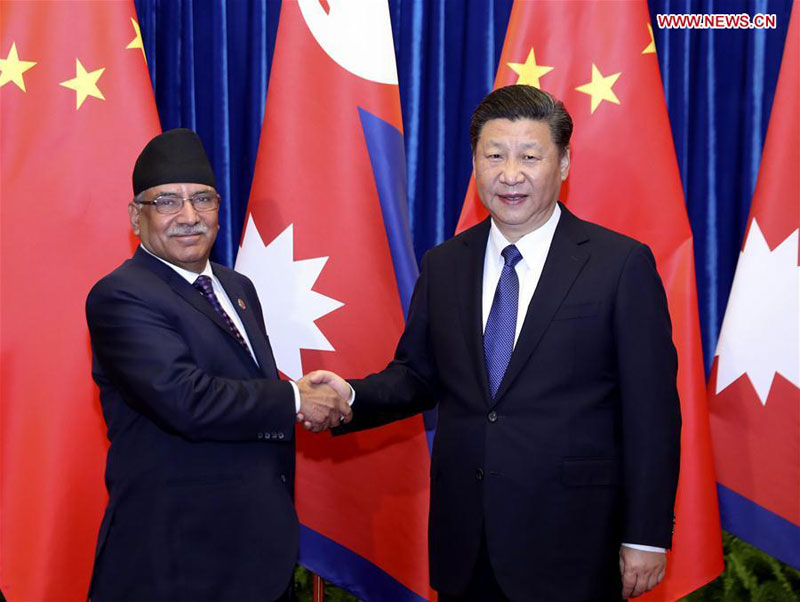 During a meeting with Prime Minister  Dahal and his delegation  at the Great Hall of the People here on Monday, President Xi said that the Chinese side is ready to initiate work on extending its railway link to Nepal and support its infrastructure development,  Govinda Acharya, the prime minister's press advisor, told Republica..

Prime Minister Dahal, who is on a seven-day visit to China, held a meeting with President Xi for over 35 minutes during which  they discussed various bilateral issues and other matters of mutual interest, informed Acharya.

The Chinese president discussed with interest  Nepal's political stability and infrastructure development including rail connectivity, and also the issue of reopening Tatopani, the main trade route between China and Nepal, which was damaged by earthquake in 2015, informed Acharya.

"Chinese President Xi has said that he has taken all the issues including the reopening of the Tatopani trade route positively and said China is ready to work together to enhance connectivity between the two countries," Acharya said.

Meanwhile, state-owned  China Global Television Network (CGTN) quoted  President Xi as saying at the meeting between the Nepali and Chinese teams: “Our countries have maintained close coordination in various levels including politics and military. We strongly pursue connectivity, post-disaster reconstruction as well as advancing infrastructures and people to people exchanges. I am glad to see this progress. We should work together to create a new momentum of friendly cooperation.”

CGTN quoted Xi as saying that “both countries should also deepen cooperation in tourism, culture and media”,  as well as energy, trade and connectivity.

Prime Minister Dahal said that Nepal is ready to cooperate and work together with China on the One Belt One Road (OBOR) Initiative. “A memorandum on the OBOR will be signed soon,” Acharya said.

“Chinese President Xi said that he and his government attach importance to all the understandings and agreements reached between the two countries  and will soon reach a formal agreement on these issues and move forward for implementation,” Acharya said. Nepal and China had signed 10 separate agreements and memoranda including the historic trade, transit and free trade agreements in March last year. But the agreements have not been implemented even after a year as the Nepal government has not been able to reach formal agreements with China.

"We will soon sign formal agreements on all the understandings reached between the two countries and move forward to work together and create a new momentum in friendly cooperation,” he added.

Prime Minister Dahal said the meeting between him and  President Xi will be “another important milestone” in  Nepal-China bilateral relations as the Chinese president has responded positively on the issues and concerns raised by the Nepali side during their meeting.

Chinese President Xi also said that the change in the government in Nepal doesn't hamper the bilateral relations between Nepal-China.

This is Prime Minister Dahal's first visit to China since becoming prime minister for the second time. He had met President Xi on the sidelines of the BRICS-BIMSTEC outreach summit in Goa, India in October.

Dahal will arrive in Lhasa, Tibet on  March 28 and stay there overnight. He is scheduled to arrive back in Kathmandu on March 29

KATHMANDU, April 19: After prolonged indecision and uncertainty, Nepal has started showing initiative for the implementation of various key agreements including... Read More...

BEIJING, Sept 29: China will build the world's deepest and largest high-speed railway station at a popular section of the country's... Read More...