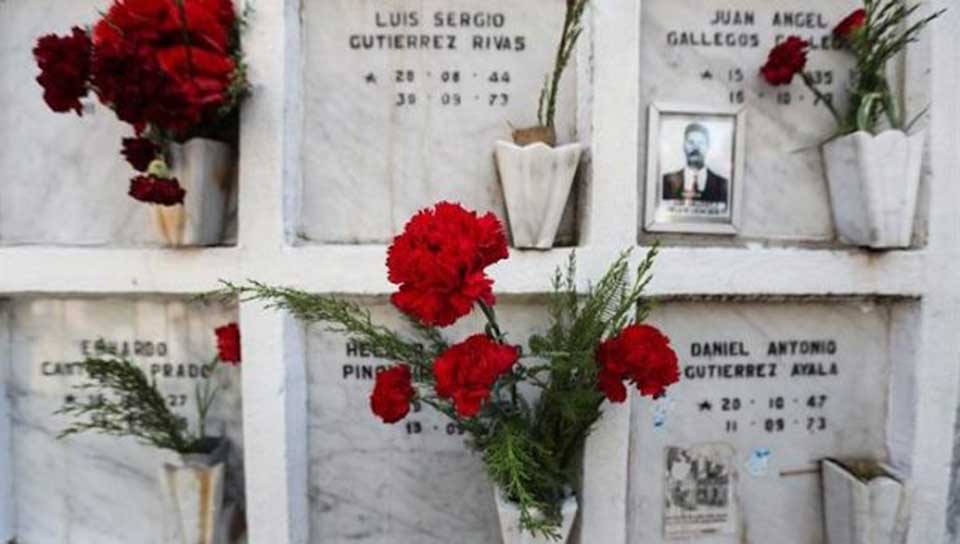 Participants paraded to the General Cemetery where a memorial for victims of the 1970 coup was decorated with flowers. | Photo: EFE

CARACAS, Sept 10: Thousands filled the streets of Santiago Sunday during a march in solidarity with the victims from the Augusto Pinochet era, a 17-year dictatorship which began on September 11, 1973.

Beginning in the Plaza Los Heroes, the participants paraded the capital city to the General Cemetery where a memorial for victims of the 1970 coup was honored with wreaths of flowers and heartfelt speeches from members of the community.

Protesters called for an end to impunity, carrying signs with the words: 45 years after the Military Strike, we are still fighting for truth and justice. While members of the Association of Relatives of the Disappeared Detainees held photographs of the missing victims.

As is traditionally the case, the emotive demonstration triggered clashes outside the cemetery, teleSur correspondent Paola Dragnic reports.

Mapuche representatives from the Machi Celestino Córdova Support Network denounced the recent rounds of arrests targeting the native people with calls for justice during the protest for victims.

“The dictatorship continues to be a present element for our people...In these 28 years of this pseudo-democracy our people have been made invisible," one indigenous protester told Dragnic.

In June, conservative President Sebastian Piñera issued a pardon for former colonel Rene Cardemil who had been sentenced to 10 years in prison for executing six people in October 1973.

During the demonstration, Sunday, Alicia Lira, president of the Association of Relatives of Executed Politicians accused Piñera of conspiring with various Supreme Court judges and leading a nationwide “impunity campaign.”

"Seeing the president of the Supreme Court meet with Piñera, who has a commitment to military condemned for human rights violations, really shows that here there is no will of the state powers to do justice," she said, adding that president’s actions of late are an insult to the memory thousands of Chilean victims killed during the dictatorship 45 years ago.

ACC Emerging Cup from March 25; DPL likely to be postponed