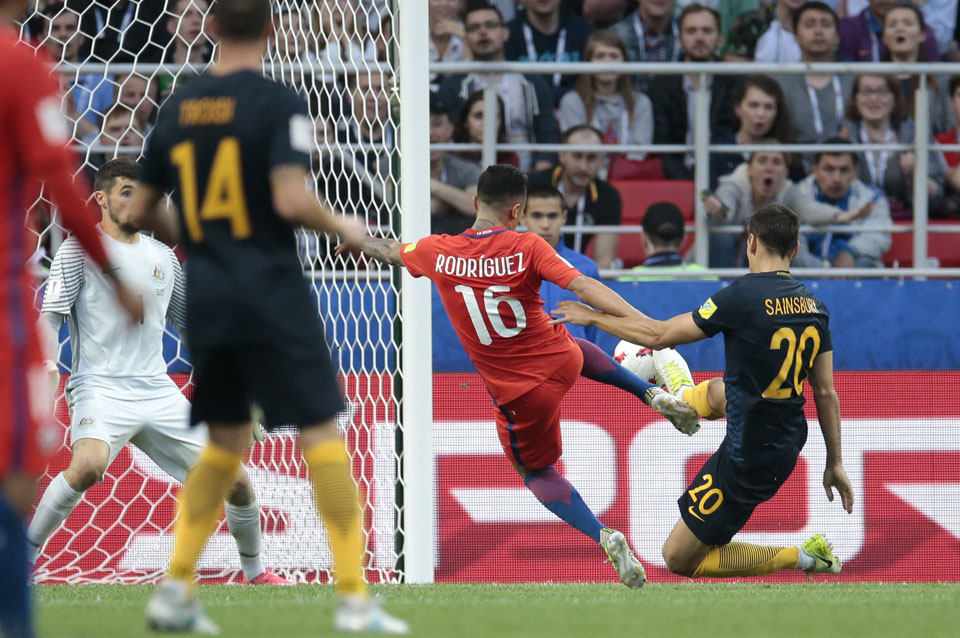 Chile's Martin Rodriguez, 2nd right, scores his side's first goal during the Confederations Cup, Group B football match between Chile and Australia, at the Spartak Stadium in Moscow on Sunday. Photo: AP

MOSCOW, June 26: Chile salvaged a 1-1 draw against a tenacious Australian side on Sunday to ensure progress to the last four of the Confederations Cup.

The Australians took the lead in the 42nd minute when James Troisi delicately chipped the ball in after a pass from Robbie Kruse, and then went in pursuit of a second goal that could have seen them qualify at Chile's expense.

Roared on by thousands of traveling fans, Chile held on and hit back in the 67th when Eduardo Vargas flicked the ball on for substitute Martin Rodriguez to hit it past goalkeeper Maty Ryan.

South American champion Chile qualifies second in Group B behind Germany to set a semifinal meeting with Portugal in Kazan on Wednesday.

Australia is eliminated but gave the rattled Chile team a shock with aggressive first half play that saw the Australians collect four yellow cards.

"This match was at the level of a World Cup quarter-final," Chile coach Juan Antonio Pizzi said. "Our opponent didn't allow us to play the way we usually do, they were very good at pressing."

Chile had chances to score early on, but were held back by wasteful finishing and Ryan's solid performance in the Australian goal. One particularly hard challenge from Tim Cahill left Chile midfielder Charles Aranguiz in pain and he was substituted at half-time.

"We know we dominated, pretty much, large parts of the game, physically, football-wise," said Cahill, who became the first Australian outfield player to win 100 caps. "When you get in players' faces, it doesn't matter who they are. They're under pressure. You've seen that we caused them some real problems, that we matched a world-class team."

Ryan made a double save in the eighth minute, first parrying Arturo Vidal's fierce shot, then scooping up Eduardo Vargas' weak effort on the rebound.

Alexis Sanchez appealed for a penalty in the 26th when he went down in the penalty area following Mark Milligan's desperate lunge, but the video review system said no foul.

Chile goalkeeper Claudio Bravo, playing for the first time in two months due to a calf injury, showed no signs of rust, showing quick reactions to block Massimo Luongo's 36th-minute effort at the near post.

Troisi's 42nd-minute goal put the pressure on Chile, which responded well and would have equalized through Vidal just before the break, but for Dylan McGowan's last-ditch block.

Cahill tested Bravo after the break, and Ryan denied Sanchez at the other end soon after.

Rodriguez's leveler sapped Australia's confidence, and the Chileans could have made it 2-1 in the 70th when Ryan was caught out of position in response to the threat of Alexis Sanchez out wide. The Arsenal forward then swung in a cross which Vargas headed narrowly wide of the unguarded goal.

Australia continued to push forward, going close once again with a mishit effort from Jamie MacLaren in front of goal, and again in added time when Gonzalo Jara blocked Kruse's shot.

DAMAK, May 6: The departmental team Tribhuvan Army Club has advanced into the semifinals of the ongoing first Damak Gold Cup... Read More...