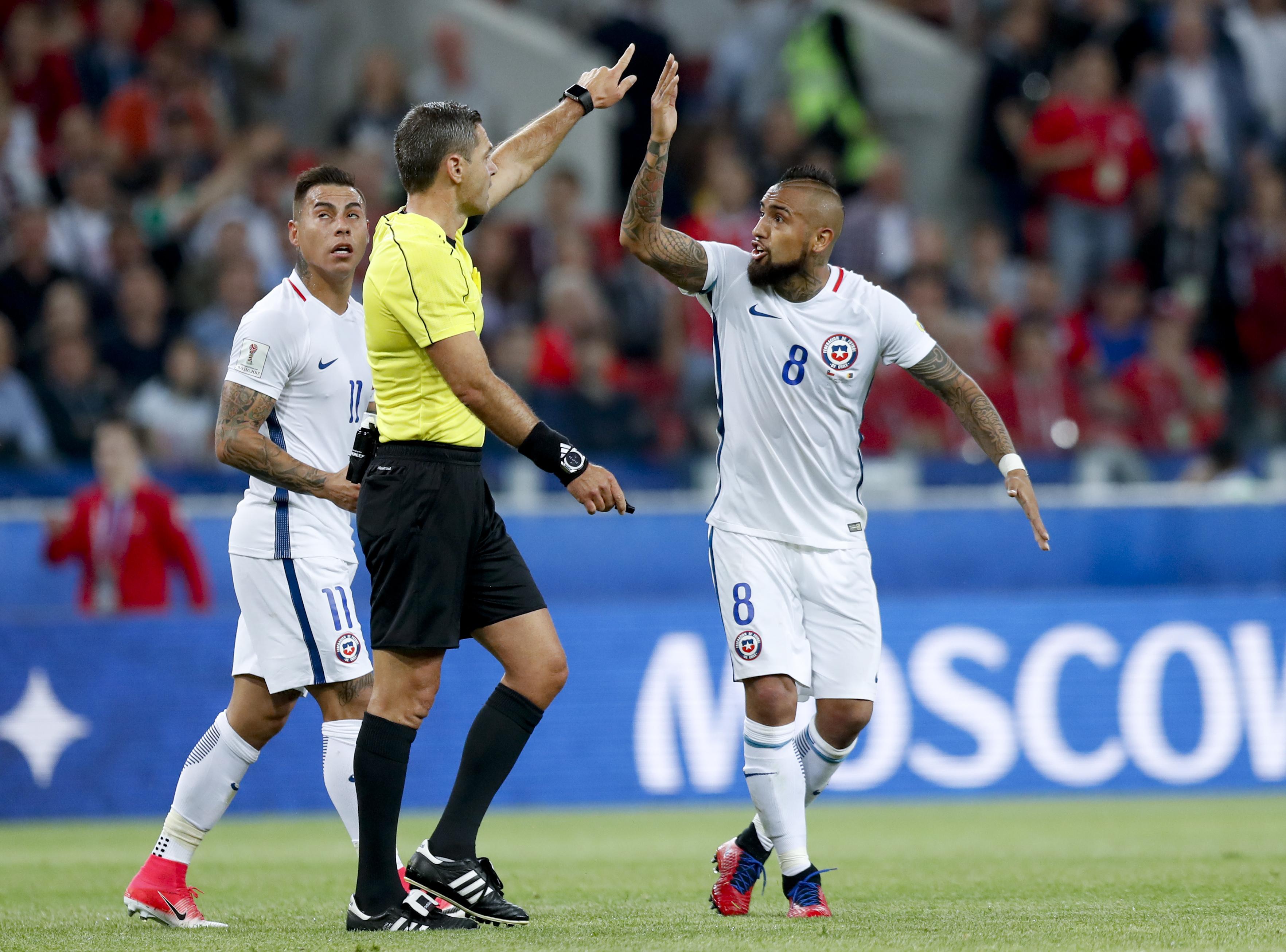 MOSCOW, June 19: Alexis Sanchez came off the bench to set up both Chile's goals in a 2-0 Confederations Cup win over on Sunday — but the video assistant referees were the real stars.

Crowded in front of screens in a darkened room, they disallowed a goal for Chile's narrowly offside Eduardo Vargas just before the break, then awarded Vargas a goal in similar circumstances late on.

With the video review system getting its first airing in a major FIFA tournament, it brought plenty of tension, but also confusion and bitterness.

Arturo Vidal's 81st-minute header from a Sanchez cross finally gave Chile the lead, before Sanchez set up Vargas in added time for the second.

Chile missed several early chances despite clear dominance over defensive-minded Cameroon, but thought they'd taken the lead in first-half stoppage time when Vidal passed the ball to Vargas, who slotted the ball past Fabrice Ondoa.

Referee Damir Skomina awarded the goal and Chile's players started an elaborate goal celebration, but the decision was then sent for video review.

Players milled about in confusion, some briefly appearing to think the referee had blown for half-time, and Chile's many traveling fans struggled to understand what was going on.

The review found Vargas offside by a matter of inches, enraging him and Vidal, who angrily complained to Skomina when he blew for half time.

"After the first half we could've been up 1-0, and 20 seconds later, the players go to the locker room tied at 0-0," Chile coach Juan Antonio Pizzi said.

"It's disheartening, and we're not used to the emotions that this situation generates, so we have to give it some time to see how it develops".

That seemed to dent Chile's confidence, and Cameroon became more adventurous, at least until Alexis Sanchez — coming off the bench following an ankle injury in training — crossed for Vidal to head in at the far post.

Chile made it 2-0 in added time, when Sanchez charged through the Chilean defense, but saw his shot saved by Ondoa, only for Vargas to score the rebound. A lengthy review found Sanchez hadn't been offside when he received the ball.

Despite watching his team concede on a video review in its first Confederations Cup game since 2003, Cameroon coach Hugo Broos was enthusiastic about the system.

"Of course if they go overboard with these types of situations, it could turn into a circus. But in this case I think it was useful and very important," he said.

"If you have these situations several times in each match, then it won't be very comfortable for the players."

South American champion Chile may have fumed at the first video review, but its players also had themselves to blame in a first half packed with missed chances.

Cameroon was under pressure immediately, when Eduardo Vargas' first-minute shot cannoned off the post and rebounded back into Ondoa, almost going in.

With Cameroon's defense playing narrow and ceding the flanks to Chile, Ondoa was also called upon to block a shot from Edson Puch, while Vargas blazed the ball over the bar in the 40th minute.

Cameroon's chances came thanks to occasional poor passing at the back from Chile, with Vincent Aboubakar forcing a save in the 11th from keeper Johnny Herrera, in for the injured Claudio Bravo.

The Cameroonians got the ball in the net once, but the whistle had already gone for a foul on Vidal, by the time Michael Ngadeu Ngadjui headed the ball into the net from a 17th-minute free kick.

At the start of the second half, Cameroon started to push forward, though without creating clear-cut chances.

Cameroon captain Benjamin Moukandjo curled a free-kick narrowly off target in the 67th, while Chile had another chance when Mauricio Isla's header went narrowly wide at a corner.

Still, the focus was on FIFA's men in front of the video screens — and Cameroon midfielder Sebastien Siani said players will just have to get used to it.

"Sometimes we lose time" waiting for rulings, and sometimes they don't go your way, he said, but "it's football now, we have to accept it."