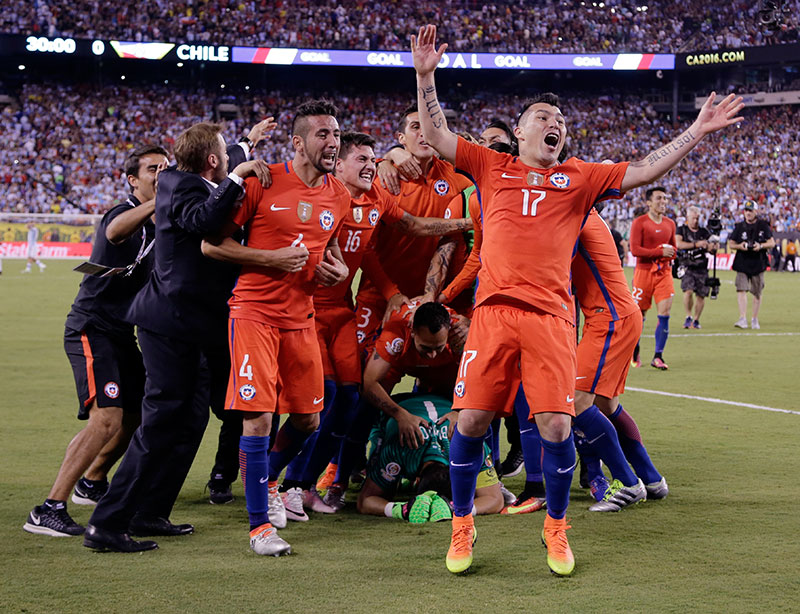 Playing two days after his 29th birthday, Messi lost a final for the third year in a row following an extra-time defeat to Germany in the 2014 World Cup and a penalty-kicks loss to host Chile in last year's Copa America. The five-time FIFA Player of the Year has won four Champions League titles and eight La Liga crowns with Barcelona, but has never taken a trophy with Argentina's senior team.

For its 100th anniversary, South America's championship was expanded to 16 nations and played in the United States, and Argentina was hoping to win its first major title since 1993.

In an ill-tempered match that included an ejection on each side and eight yellow cards, the match was scoreless through regulation and 30 minutes of extra time, with Argentina's Gonzalo Higuain missing a clear goal-scoring opportunity for the third straight final. Argentina outshot Chile 16-4 and La Roja collapsed three, four and even five defenders around the bearded Messi, then chopped down the diminutive attacker when he tried to accelerate toward the goal.

Messi, who scored five goals in the tournament, had a free kick 28 yards out in the 115th minute after Francisco SIlva fouled him, but the ball deflected off the wall and over the crossbar. Messi's 35-yard free kick was headed on target by Aguero in the 10th minute of extra time, and Chile goalkeeper Claudio Bravo jumped extended his right hand to tip the ball over the crossbar.

Argentina goalkeeper Sergio Romero saved the opening kick by Arturo Vidal, and up stepped Messi, the best player of his generation and considered alongside Brazil's Pele and Argentina's Diego Maradona as the sport's greatest ever. While he won the titles at the under-20 and Olympic (under-23) levels for Argentina, in the minds of many he needs a title with his nation's senior team to solidify his place as one of the greats.

Messi sent his shot over Bravo — his Barcelona teammate — and into the stands. Messi turned, bowed his head and clenched both fists in frustration.

Nicolas Castillo and Charles Aranguiz converted their kicks for Chile, and Javier Mascherano and Sergio Aguero made theirs, leaving the teams tied 2-2 after three rounds.

Jean Beausejour put Chile ahead, and Bravo dived to his right, saving Lucas Biglia's shot and bringing up Silva, a 30-year-old midfielder. Messi briefly pulled his jersey of his face, as if not wanting to watch.

Romero dived to his left and the shot went in to his right, giving Chile another title.

Messi crouched over, as if in pain, then got up, took off his captain's armband and walked to the bench, where he was consoled by Angel Di Maria. After Messi came back on the field, Aguero put a hand on one of Messi's shoulders. And new FIFA President Gianni Infantino gave Messi a pat on the back when Messi came onto the podium with his teammates for his second-place medal. Messi almost immediately took it off.

It was the fourth final loss for Messi, who also played for Argentina in its penalty-kicks loss to Brazil in the 2004 final.

A crowd of 82,076 at MetLife Stadium — the largest to see a soccer game in New Jersey — raised the tournament total to just under 1.48 million. The average of 46,119, nearly double the 25,223 in Chile last year, will be used by the U.S. Soccer Federation as evidence it deserves to host a World Cup again, likely as part of a bid for the 2026 tournament.

Brazilian referee Heber Lopes became the focus in the first half, ejecting a pair of defenders: Chile's Marcelo Diaz in the 28th minute and Argentina's Marcos Rojo in the 43rd. After issuing six yellow cards during a World Cup qualifier between the nations in March, Lopes handed out eight yellows, including one to Messi for diving in the 40th minute, and the two reds.

Diaz got his first yellow for hacking down Messi about 28 yards out in the 16th minute, then got his second for obstructing a charging Messi about 30 yards out. Rojo received a straight red when he slid into Arturo Vidal from behind and poked away the ball, but Vidal's leg bent awkwardly under his body as he fell.

Higuain had the best first-half chance in the 21st minute when he picked up a giveaway from Gary Medel, dribbled in and chipped the ball over Bravo only to have it roll wide of the far post. It was almost the exact time he broke in alone during the World Cup final against Germany and also shot wide. Higuain also missed a tap-in of Ezequiel Lavezzi's cross during the final minute of regulation in last year's final, then sent his penalty kick during the shootout over the crossbar.