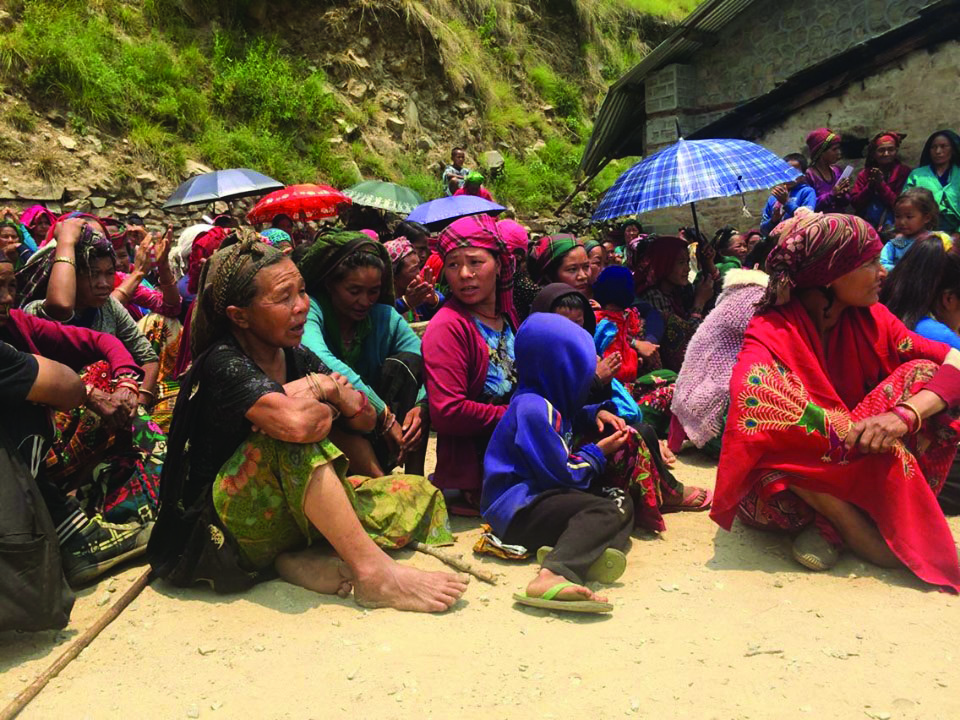 Lokendra Khanal/Republica Women participating in an awareness program against violence against women in Rukum in this recent picture.

RUKUM, June 4: Twenty-one-year-old Sapana (name changed) of Bhume Rural Municipality in Rukum (East) got married to a boy of her locality at the tender age of 16. Her family arranged her marriage. Sadly, the young couple soon started having disputes and misunderstandings.

A year after the marriage, Sapana had given birth to a daughter, and at the age of 19, she delivered her second daughter. Recently, Sapana knocked the doors of the District Court, Rukumkot demanding a divorce from her husband.

Many young girls in the district are opting for divorces of late after years of abuse and traumatization from their husbands and in-laws.

She laments that she was obliged to take this step after being the victim of domestic violence from her husband. According to her, her husband repeatedly abused her and told her to leave his home as soon as possible. The court is presently reviewing her case.

Eight years ago, Deepa Ghartimagar of Putha Uttarganga Rural Municipality tied the nuptial knot with her lover after a brief affair. She was just 15 years old then. She gave birth to her first child when she was 16. These days, her once-doting husband has turned into a devil who keeps beating and torturing her for no reason, she says. There were days when he even made her sleep on an empty stomach. However, she expected days to change for good once he went abroad for employment.

To her worry, her situation got worse as her husband completely neglected her and their little child. Even when he visits his home during holidays, he keeps beating her. This compelled her to seek help from the police. Following her complaint, police called both of them and reconciled their issue. But that did not help bring their marriage on track. After bearing the hardships of bad marriage for years, she finally reached the court in Rukumkot to file for divorce.

Similarly, twenty-one-year-old Kamala Budha of Sisne Rural Municipality-2 has two daughters. She too had got married at the age of 16. These days, she is often seen making rounds of the district court by clutching her two daughters.

Kamala says she filed for divorce after her husband brought the second wife. Even though her husband loved and took care of her during the initial two years of marraige, their relationship turned sour sooner. "In the beginning, we shared a good bond. Later, after the birth of our first daughter, we started to have disputes," said Kamala, adding, "but after our second daughter was born, he became very violent and started torturing me. Now, he even got married to another woman."

Not just her husband, but even his family members ostracized and ill-treated her. That was enough for her to understand that it was time for her to take a bold step and release herself from the toxic marriage, she says. It's not like she didn't try to reconcile the differences and make things better, but she failed miserably. Every time she took efforts to make things better, she received more hatred and abuse.

That even affected her little daughters mentally. As she saw no reason to be in that family, she mustered courage and decided to file for the annulment of her marriage. These are just a few typical cases of how young girls are getting divorced at an age when they should be getting married.

Even after so many examples of failed marriages, the practice of child marriage is still widely prevalent in Rukum (East) and Rukum(West). Women Right's Advocate, Rachana Malla, argues that child marriages also affect the physical and mental development of women. According to her, it invites several health problems, including uterine prolapse. It also adds to the number of infants and maternal mortality rate.

"They are compelled to quit their studies at young. Even before they could grow physically and mentally, they are obliged to take social and other burdens of the family, "said Malla, adding, "Youngsters fill most divorces in the district." Sushil Kumar Yadav, the registrar at the district court, informed Republica that a total of 40 cases of divorces had been filed in the current fiscal year alone.

He further added that of the 126 cases filed in the District Court, Rukumkot, 40 of them were for divorce. Males have submitted six of such cases while women lodged the rest. "Most of the women seeking divorce are aged between 19 to 26 years," said Registrar Yadav.

JUMLA, Feb 24: Manita Nepali of Guthichaur Rural Municipality-4 got married at the tender age of 16. She delivered her first... Read More...