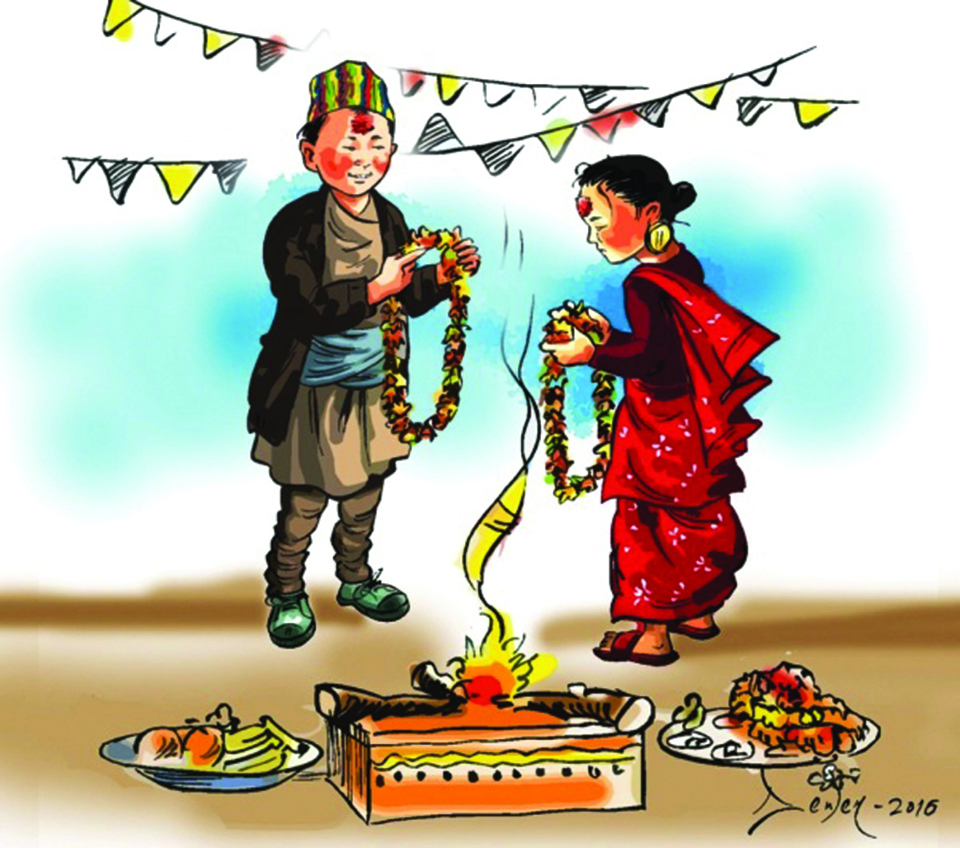 JUMLA, March 30: District Police Office, Jumla last week received a complaint about forceful child marriage. According to the district police chief, DSP Sitaram Rijal, this is the first ever such complaint the office has received. Though child marriage is not uncommon in this region, never before had anyone come over to the office to officially register a case.

In the complaint, it was said that Deepak Kami, a local of Chandannath Municipality– 10 had lured a girl from Tila Rural Municipality to marry him. Reportedly, both are underage, while the legal age in the country for marriage is 20.

Police followed the case and found that Kami had kept a girl at home ‘after marrying her’. Police arrested him for further action.

“We found that he had lured the girl,” said DSP Rijal.

Child marriage still remains a kind of culture in most parts of the country. Even after this practice was banned by the government, not every community has stopped practicing this culture. Of late, not just arranged marriage but even love marriage of underage kids is reported in large scale. And this has taken a serious toll on education, health and future of the young kids. Early motherhood has even taken many lives.

According to 19-year-old Bishnu Maya Neupane, who got married four years ago, lack of awareness is leading youngsters to child marriage.

“I was just 15 when I got married. Now I am 19. I have not yet reached the right age to marry but I am already a mother,” said the local of Guthichaur Rural Municipality - 4. “Had I known how complicated life becomes once you get married, I would have never opted for it so early,” she added.

Neupane is a mother of two children. Her health is not so good. Her back aches and stomach cramps bother her a lot.

“I could not get much rest during pregnancy and even after delivery. Now my back aches,” she laments.

Her neighbor Manita Nepali also got married when she was just 16. At 18, she gave birth to her first baby. “I fell in love with a boy and eloped with him,” she said. She added that her elders have absolutely no role in her marriage.

Nepali expressed ignorance over the right age to marry. She thinks that 20 is pretty much old age for marriage. “Here everyone gets married before 20. If you are 20 you are too old to marry,” she noted.

This shows that though the government fixed the legal age to marry, this has not been well communicated across the country. There are rural areas where people do not consider marrying before the age bar set by the government anything unusual.

“I was not told by anyone that I was too young to marry. Had I roamed around with him or  seen together without getting marriage, I would not been tolerated by the society,” said Nepali. “So, rather than to invite any problem, people here get married when they fall in love. Otherwise, the elders arrange the marriage. Girls are not kept at home once they become adolescent,” she added.

According to health workers in the district, the growing use of technology has been adding fuel to this culture. Instead of making people aware of health and other aspects of child marriage and discourage it, girls and boys tie the knot after developing intimacy with each other. By the time they reach 20, girls here develop many health complications due to early motherhood, health workers reported.

Hari Bahadur Bhandari, chairperson of Guthichaur Rural Municipality, said, “Facebook is very dangerous. These days, we can’t monitor children’s activities. They use Facebook and other sites and get connected. Suddenly notice gets out that they have eloped, they have performed marriage in temple and so on,” he lamented. “We want to control child marriage to improve their health and education. But huge challenges are there.”

Child marriage is rampant in the rural municipality. Guthichaur, Paratasi, Tila and Kansundari areas top the chart of child marriage.

Meanwhile, DSP Rijal stated that police cannot take action until the affair is reported. Case has to be filed, or verbal complaint made for police to get into action.

“We have to fulfill our duty and maintain law once we receive complaint. Educated people should take genuine initiatives to curb child marriage, or else it can never be eradicated,” he said.

No let up in child marriage: NCRC

KATHMANDU, Feb 5: Incidents of child marriage have not decreased although many programmes for abolishing child marriage practice have been... Read More...