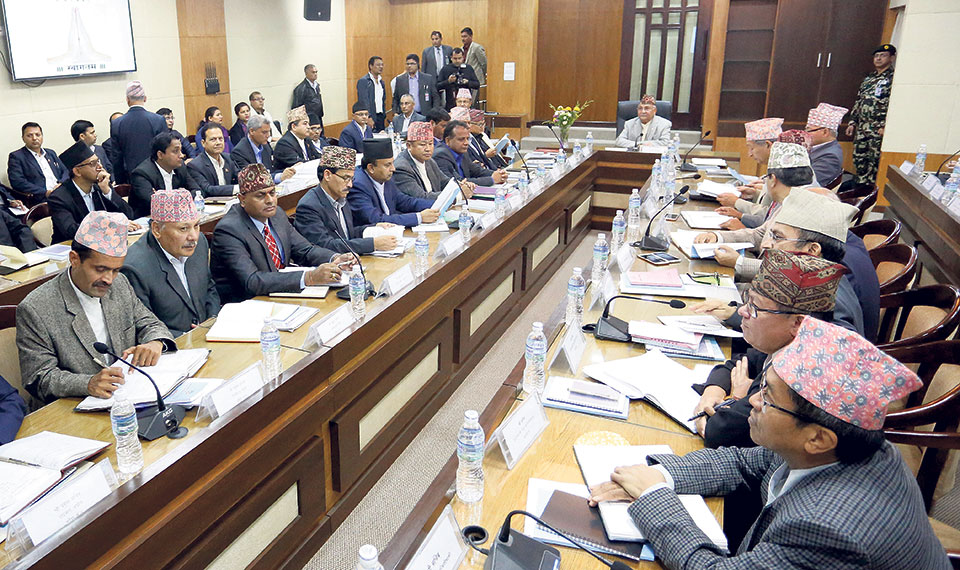 Chief ministers, secretaries and attorneys of the seven provinces during a meeting with the prime minister at Singha Durbar on Wednesday. They complained about lack of funds and expert manpower. The prime minister assured them necessary support. Photo: Dipesh Shrestha/Republica

KATHMANDU, March 22: Chief Ministers of all seven provinces have complained to the prime minister that they have been reeling under shortage of resources, budget, expert manpower and they also lack proper coordination from the central government.

Prime Minister KP Oli had summoned the chief ministers with their principal secretaries and chief attorneys in the capital for a meeting in a bid to maintain balance and coordination between the central and provincial governments.

“We complained of not getting expected support and coordination from the central government including expert manpower for the formulation of laws as we have to enact many new provincial laws,” said Chief Minister of Province 2 Lalbabu Raut after the meeting.

“We informed the prime minister about lack of resources and expert manpower for preparing concepts of development in the provinces, preparing administrative structure and legal framework. In response, the prime minister has assured us of providing as much help as possible from the center,” said Province 5 Chief Minister Shankar Pokharel.

The first-ever meeting between the prime minister and chief ministers of all the seven provinces, after a month of formation of the provincial governments, ran for nearly six hours at the Office of the Prime Minister and Council of Ministers at Singha Durbar on Wednesday.

Responding to the grievances of the chief ministers, Prime Minister Oli assured of supporting the provincial governments from the center and also urged them to maintain balanced relations with the center, province to province and with the local governments.

“The prime minister said that all governments in the country including provincial and local governments are a part of the Government of Nepal and they should maintain proper coordination for driving the country toward prosperity,” said chief adviser to Oli, Bishnu Rimal.

According to Rimal, Prime Minister Oli said that the government will soon issue a white paper pointing out the challenges faced by the government.

“We don’t have the right to reverse from federalism. We should work together for making federalism a success despite the difficulties and lack of resources,” Rimal quoted Prime Minister Oli as saying at the meeting.

Stating that federalism was new to the country and federalism-related tasks have been started from zero level, Prime Minister Oli also urged the provincial governments to compete among each other for prosperity and development.

“We are hopeful that implementation of federalism and constitution will move forward smoothly,” said Province 5 Chief Minister Pokharel.

The chief ministers asked for adequate budget for the provincial level, vehicles and other resources and sought supportive role from civil servants at the meeting. They had also complained against civil servants for their reluctance to reach their new work stations in the provinces.

Province 2 Chief Minister Raut said he demanded that resources should be distributed based on human development index and population density of the provinces. He also said that there is a problem of citizenship issue in the province.

The chief ministers also demanded that National Natural Resources and Financial Commission be formed at the earliest.

JHAPA, May 27: In the second Constituent Assembly election, nearly eight percent of the total votes were found invalid in Jhapa.... Read More...

Director opens up about leaked sex scenes in 'Parched'