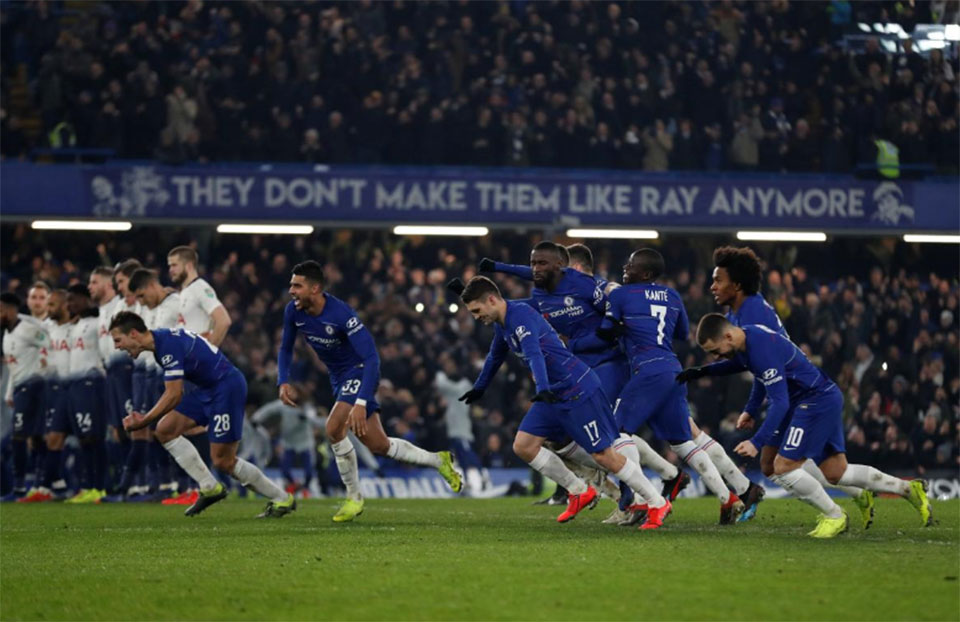 Trailing 1-0 from the semi-final first leg, Chelsea turned the tie on its head with goals by N’Golo Kante and Eden Hazard in the first half but Fernando Llorente struck for Spurs in an enthralling Stamford Bridge duel.

Chelsea had 20 goal attempts to Tottenham’s five but the visitors held firm to set up a penalty shootout.

Chelsea’s penalties were more clinical and David Luiz slotted past Paulo Gazzaniga to seal the victory and send Chelsea into their 15th cup final in 17 years.

Spurs, who were without Harry Kane, scorer of a penalty in the first leg, and England team mate Dele Alli, both because of injury, plus South Korean Son Heung-min who is on international duty, battled hard but their wait for silverware goes on.

They have not won a trophy since beating Chelsea in the 2008 League Cup final.

After Chelsea’s 2-0 weekend Premier League defeat at Arsenal, Sarri raised eyebrows by accusing his players of being “difficult to motivate” and publicly demanded more of his Belgium forward Hazard.

But a visit from rivals Tottenham, with a Wembley final at stake, provided the incentive for a far sharper display, with Hazard at the heart of Chelsea’s attacking endeavour.

“I think that they reacted well tonight,” Sarri, who has never won a trophy during his near 30-year managerial career, told reporters.

“But I didn’t attack my players. I just said we had a problem. The reaction was very good but we need to have motivation with continuity now.

“In the last three or four matches we were not able to be dangerous. Tonight was better.”

Tottenham, who are four points above Chelsea in the Premier League standings, looked comfortable early on but the hosts gradually began to exert a measure of control.

Chelsea went ahead in the 27th minute when Kante’s shot from the edge of the area went through the legs of two Spurs players and squirmed past Gazzaniga — in goal instead of Hugo Lloris.

With their tails up Chelsea began to dominate and they went ahead in the tie in the 38th minute when a fluid passing move ended with Cesar Azpilicueta’s low cross being calmly side-footed home by a stretching Hazard.

Tottenham responded after the break and Kane’s replacement Llorente bundled in a header from Danny Rose’s cross to put them back on level terms on aggregate in the 50th minute.

The Spanish striker also wasted a great chance from Eriksen’s raking pass before being replaced by Moura.

However, it was Chelsea who looked the more likely side to avoid the need for penalties. Hazard twice went close and Spurs needed some last-ditch tackles to keep Chelsea at bay.

It was all in vain for Mauricio Pochettino’s side, though, as they faltered with a domestic final in sight.

“We are disappointed but it’s a massive success to get to the semi-final with all the circumstances,” he said.

“We’re so disappointed to lose in that way, but it can happen. The players were brave and with all the circumstances I can only feel proud. It will make us stronger.”