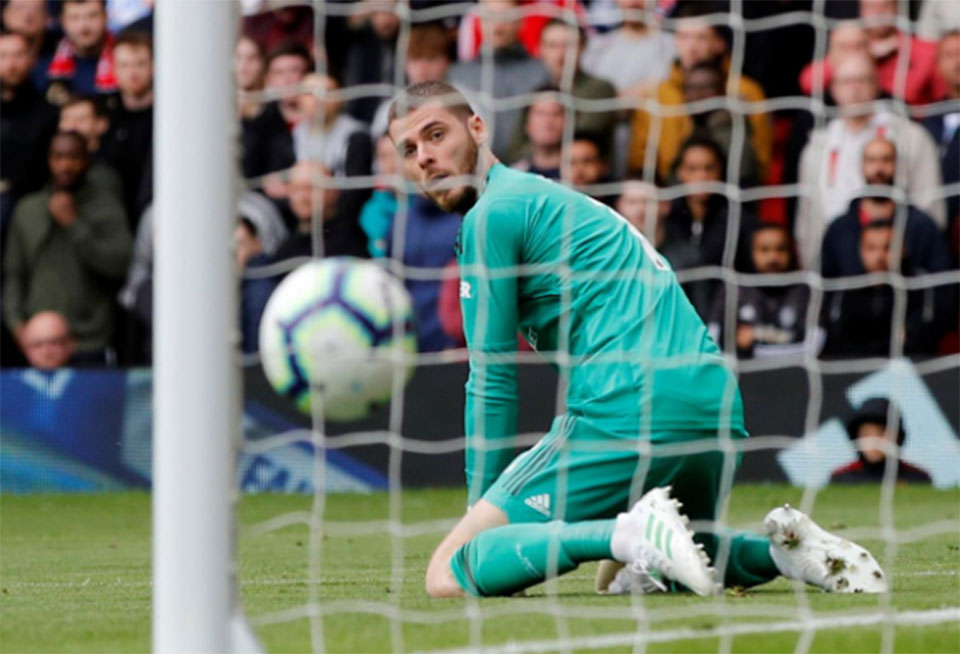 MANCHESTER, April 29: Chelsea bolstered their top-four hopes with a 1-1 draw at Manchester United after the home side’s Spanish goalkeeper David de Gea gifted the Londoners an equaliser in the Premier league on Sunday.

United led through Juan Mata’s 11th minute strike, but just before halftime the visitors were level when De Gea weakly parried an Antonio Rudiger shot into the path of Marcos Alonso.

With two games remaining, the result put fourth-placed Chelsea on 68 points, two clear of Arsenal who are fifth and still three ahead of sixth-placed United in the race to earn a Champions League berth for next season.

“A draw is a good result ... Now we now have two games, one at home (Watford), one away (Leicester city), and we will try and be in the top four,” Chelsea’s Eden Hazard told Sky Sports.

After a stunning start to Ole Gunnar Solskjaer’s reign as United manager, his side have run out of steam, winning just two of their last 10 games in all competitions.

UNCHARACTERISTIC ERROR
The hosts dominated the first half, fully deserving to take the lead when marauding left back Luke Shaw latched onto a chip into the area from Romelu Lukaku and passed across the goal for Mata to score against his old club on his 31st birthday.

But De Gea, whose form has dipped in recent weeks with a string of uncharacteristic errors, failed to deal with Rudiger’s shot and Alonso pounced to steer the ball home from a tight angle and bring Chelsea level in the 43rd minute.

Mata said the United players were down but fully behind their 28-year-old Spain keeper De Gea.

“It is difficult when you have the top four so close. We have done an incredible job over the last months to get there. We will try until the end, but obviously we needed to win today,” he said.

“David is unquestionable for me. His level has been fantastic for this club. He has been the best player over the last years,” he added of his compatriot.

“We all have good and bad moments in our careers, the important thing is how we react. I have 100 percent confidence in him, we all have. He will save many goals in the next games.”

United began Sunday’s match full of zest and attacking threat, having lost 2-0 at home to title-chasing Manchester City in midweek, while Chelsea looked more resolute than in a disappointing 2-2 draw at home to Burnley in their last game.

However, after trading blows in the first half at Old Trafford, the second period was largely disappointing with neither side on top, although United nearly won it at the end when defender Marcos Rojo’s header was cleared off the line.