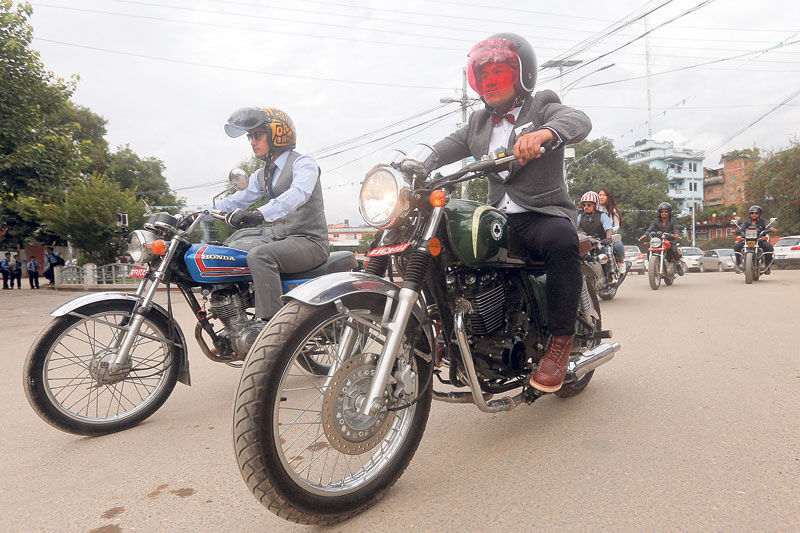 The government should not leave us, even if we are driving at the speed of a bullock cart, at the mercy of supernatural force
Outside a temple at the Patan Durbar Square, there are sculptures of kings astride giant elephants trampling upon humans, perhaps the enemies of the ‘state’. These images vividly come to my mind, especially when I’m biking along chock-a-bloc arteries of Kathmandu. Perhaps this has got something to do with my near-death experience on the road in May 2008.

It’s five o’clock and I’ve got to bike my way to the office. The roads instill dread, but I have no choice. Once, while driving under the influence of thoughts along the Ring Road at Bagdol, I came under the wheels of a goods-carrier—a close shave. Not all people are that fortunate. It was then that I had this bizarre realization (or illusion) of some creatures from high above watching me, not to mention the merciful driver, who could have easily rolled over me and called it an accident. Thereafter, a tortuous routine involving, among others, walking on crutches on rough and tumble stretches, shuttling between my home at Bagdol and Gwarko-based B&B Hospital and the office, began. These experiences are comparable to unbearable pain my wounded body would suffer with every fresh pouring of a copious dose of Betadine on my wounded leg on alternate days.

Driving my not-so-speedy speed machine was out of the question then. Shuttling between home, office and the hospital in taxi was an undertaking that sent my already shaky economy further floundering. Negotiating short stretches on crutches, I would feel as if my weathered soul was carrying my dead body to, I don’t know where.

But this shuttling had its rewards. On my home from office after doing the graveyard shift, I would meet nocturnal creatures (cabbies, of course), who would narrate graphic details of their rendezvous with beautiful Kichkanyas, who would appear out of nowhere, board four-wheelers, order the cabbies to take them to their destinations and vanish upon reaching there, without paying the dilfek cabbies and thus burning holes in their pockets. I imagine how their poor wives, queuing up to fetch water from public taps, would lament among friends how their men had squandered money on their sautas (second, third or nth wives), the formless nymphs.

Not all those voluptuous, mysterious, alien riders were nymphs though, as a driver confided to me during my ride home from Anamnagar.

Once, he told me, a giant among humankind boarded his not-so-heavy vehicle (a feeble Maruti 800) from Putalisadak and ordered the humble creature to take him to the hip, happening and glitzy Durbarmarg. There, he vanished like all other nocturnal creatures (save me, of course), leaving him with the empty realization that he had carried the not-so-light spirit of a larger-than-life party animal. During those troubled times, how I wish I had the ability to vanish and reappear as a human at will, especially while boarding and getting off taxis. That way, I could have saved a Helluva lot of cash.

But then if wishes were taxis, beggars would shuttle in them too, wouldn’t they?

After months of shuttling, I recuperated and hit the road, again. I have not met with an accident after that 2008 incident, though I, like fellow motorists, have to brave speedsters, stray cattle, children let loose, drunkards, and pedestrians always in a hurry to head to I don’t know where, ‘among others’, with my mind pretty occupied with existential problems like mounting fuel bill, skyrocketing prices and not-so-fat paycheck. I feel fortunate because ever-alert police have not so far fined me for driving under the influence of thoughts.

I don’t know what keeps me safe on the road. Does an alien being called Almighty exist there for me? That I have not died on the road while driving is a miracle in itself. It must be because fellow bikers, car drivers and drivers of famous transport companies like Nepal Yatayat, Swoyambhu Yatayat, Madhya Upatyaka Yatayat, Sajha Yatayat and Muktidata Yatayat have been exceptionally kind to me. Or perhaps my lifeline does not end on the road, unlike that of my dear Indian Army Subedar Major uncle, who died while crossing a busy Calcutta stretch, a year before retirement, 30 years ago.

But the government should not leave us, even if we are driving at the speed of a bullock cart on the busy roads of Kathmandu, at the mercy of some supernatural, quasi-natural or unnatural force. Anyway, who knows if such a force really exists? And even if it does, it must be a creature of its own free will. What will happen if it gets drunk and forgets to protect us? The government should not take chances in matters of life and death.
Rather, it should build some slow lanes for people like us and give us a fair chance to survive without having to brave Formula One drivers and others on chaotic roads.

MANCHESTER, England, May 13: Leicester had a late penalty ruled out in unusual fashion as Manchester City held on for a... Read More...

KATHMANDU, Dec 28: My City Pulse, an app that lists out all the best events and trendy promotions in the city,... Read More...