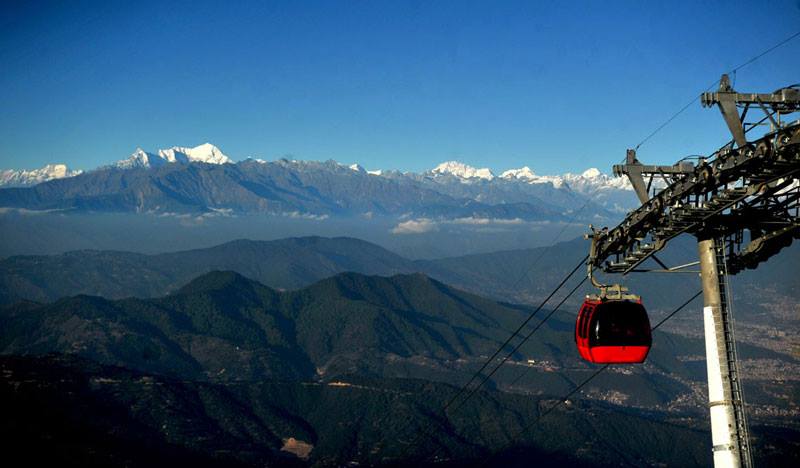 KATHMANDU, Dec 21: Once you board the newly operated Orange Bus in Kathmandu Ring Road as a passenger, the lady conductor hands you a ticket after you pay the fare which is not more than 25 rupees to the maximum. This ticket in your hand means you have an insurance cover of 50 thousand rupees, in case of any accident while you are on this bus.

But if you buy a ticket to take a joy ride in the newly operated Chandragiri Hills cable car which is worth Rs. 700 for a two-way 18 minutes ride, the terms and conditions on the back of the ticket read - "The owners and the management team of Chandragiri Hills Ltd shall under no circumstances to be held liable for any accidents, injury, damage or loss of property."

This means any mishap that occurs including with the cable car system, the operators will not be liable for it. It will be the passengers themselves responsible. However, it may be noted that this is the same company that has defended the otherwise expensive fare to the adopting of latest technology imported from outside the country, to ensure "maximum safety" of the passengers. And fare is not only the thing that is expensive for anyone heading to Chandragiri Hills for a trip.

Passengers are not allowed to enter the cable car premises carrying edibles. Security guards frisk passengers before they board the cable cars at the ground station. And passengers coming in early with the objective of also paying homage to the newly rehabilitated Bhaleswar Mahadev temple will be forced to eat food of his/her choice at the food outlets including restaurants run by the company itself. And as criticized in the media, including the social media, the price of food items are really on the expensive side.

It was the most discussed matter among the many revellers that had thronged the hilltop last Saturday, a day after it was officially inaugurated by the Prime Minister against his pledge to not waste time cutting ribbons. But as far as the people who choose to take a cable car ride inside the valley are concerned, they will have no other alternative than to eat at the outlets run by the cable operators only.

A cup of tea costs Rs. 70, excluding the 10 % service charge and 13 % VAT, while a buffet lunch including dal, bhat, tarkari (chicken for non-veg) was priced Rs. 560. High price for food items usually entails good service, but that was lacking this Saturday, which had a huge turnout despite the negative news reports the same morning about the highhandedness of the cable car company in constructing a hotel by clearing community forest just below the hill station.

Furthermore, the menu at the Beer Garden of the cable car station priced Tonic Water for Rs. 250 per can and Mineral water for Rs. 80, excluding the 23 % tax. On an average the market price for tonic water is Rs. 55 and mineral water Rs. 25. Nothing could justify selling drinking water for almost thrice the market price in a premises built with significant tax rebate from the government and using public land on lease for a meagre sum.

Surprisingly though the company put up a statement titled “Commitment of Chandragiri Hills” in major dailies on Tuesday where it claims to be selling food items for comparatively lower price than the menu there suggests. For example, it lists water being sold at Rs. 22 per bottle and tea at Rs. 32. This was not the case last Saturday.

Furthermore, it claims of having allowed other edibles except cooked dal, bhat and tarkari as well as alcohol. The company however is selling alcohol within the premises through a bar claiming it to be the bar in the highest altitude of 2547 meters. It also runs a beer garden below the view tower, with a bottle of beer costing almost Rs. 500.

Through the statement, the company has expressed the commitment to preserve the area’s ecology, bio-diversity and natural beauty. However, one can clearly see from way above the destruction caused as a result of the building of concrete structures in the midst of a serene community forest.

All the trees falling below the path of the cable cars in the community forest have been cut down leading to a barren space right from the bottom to the top of the otherwise dense forest area.

Hence, the state of affairs in and around the Chandragiri Hills cable car calls for an immediate review and examination by the authorities concerned so as to make sure that the consumers are not cheated and that the environment is not compromised in the name of tourism.

Furthermore, it will only be the consumers at large, if satisfied with the service provided, can establish Chandragiri Hills cable car service as one of the major tourist attractions of Kathmandu Valley as claimed by the company in the ‘commitment statement’ released in wake of the recent media backlash. RSS
--------

Govt forms panel to probe death of rhino
38 minutes ago