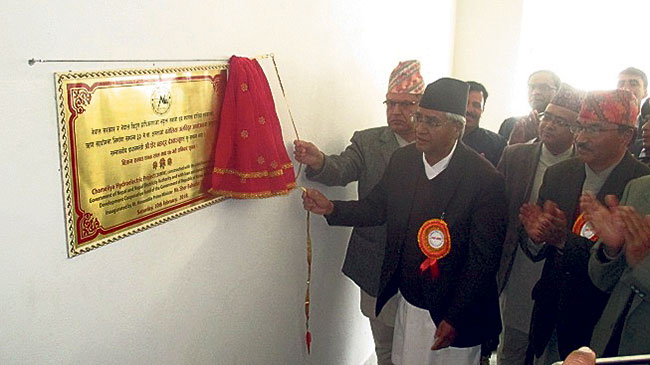 DARCHULA, Feb 10: The 30 MW Chameliya Hydroelectric Project started generating electricity from Saturday. The project which saw several cost variations, controversies and frustrations over delays has now been connected to the national grid, nearly 11 years after works started in January, 2007. The peaking run of river project, which can generate minimum six hours in full capacity, was supposed to complete in May 2011. The project started for a regional balance in electricity generation is believed to be a landmark in Province 7.

With the commencement of Chameliya, the country's total electricity production capacity has reached 956 MW. The project's estimated cost was Rs 8.34 billion but has now nearly doubled to Rs 15 billion - a textbook example of how the country has lagged in project management.

Prime Minister Sher Bahadur Deuba inaugurated the project located in Sailyasikhar Municipality on Saturday amid a function. PM Deuba said, "This project will help to boost economic activities in the region as well as the overall development of the area." "The region can generate up to 20,000 MW of electricity from its rivers like Mahakali, Karnali , Chameliay and Budhinanda among others," added PM Deuba. NEA had to bear a loss of over Rs 7.50 billion due to delays in project completion.

Despite much criticism of time and cost overrun, squeezing was encountered in tunnel digging of 843 m out of the total 4 km tunnel and the treatment of squeezing took much time while the inflated price of the cost overrun courted controversy and work was stopped for about a year when the oversight agencies started to investigate. But none of the oversight agencies came with a conclusion and this issue still remains a mystery.

Addressing the inaugural program, managing director of Nepal Electricity Authority Kulman Ghising said that the project built with the newest technology can help to end the power cut in this region and will also help his campaign of ending the load shedding.