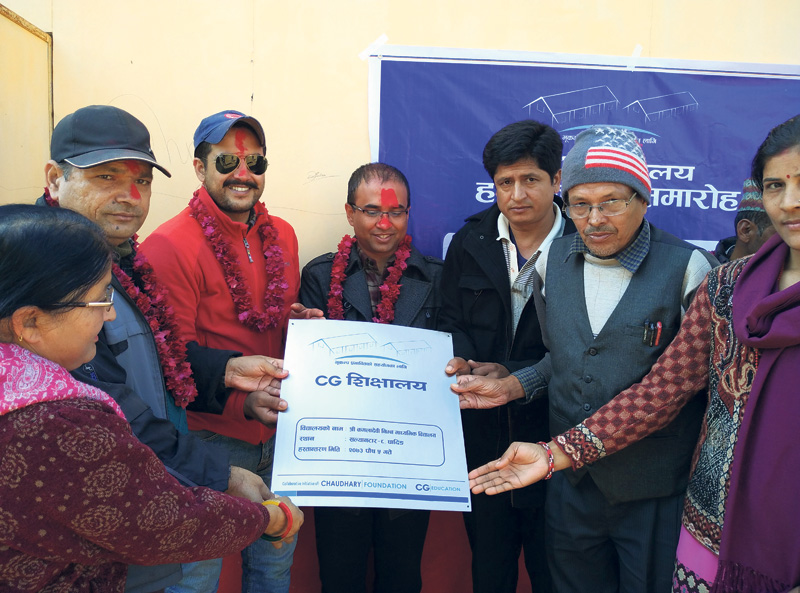 KATHMANDU, Dec 24: Chaudhary Foundation (CF) has handed over 266 transitional shelter homes (under CG Ashraya) and two school buildings (under CG Shikshyalaya) in earthquake-affected areas in Dhading district. The homes were built for quake-affected communities of Baseri, which was one of the most-affected VDCs in last year’s earthquake.

“It has been quite some time after the earthquake, but the problems faced by affected communities are still the same,” Chaudhary Foundation Chairman Binod Chaudhary said. “It is our responsibility to provide an abode for those who lost their homes in the quake. The Chaudhary Foundation continues to work along that direction.”

At an event organized in Baseri on Monday, Assistant Chief District Officer of Dhading Rammani Mishra and Chaudhary Foundation officials handed over the homes to the affected community.

Speaking at the event, Mishra said the CG Ashraya program came as a positive and helpful initiative. “These transitional homes came as a boon as they provided immediate housing to the affected people. They saved them from the hardship of living under tarpaulins,” he said.

KATHMANDU, July 2: Two students were killed and 17 others injured when  a compound wall caved in at Pushpanjali Secondary School... Read More...

An opportunity has come to punish those who dissolved parliament: Minister Chaudhary
32 minutes ago