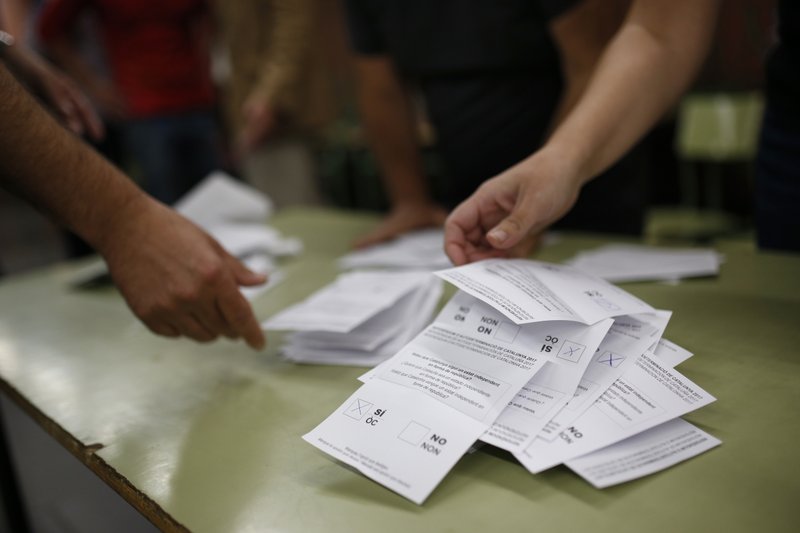 BARCELONA, Oct 2: Catalonia’s government was holding a closed-door Cabinet meeting Monday to discuss the next steps in its plan to declare independence from Spain following a disputed referendum marred by violence. Regional officials say the poll, which Spain insists was illegal and invalid, shows that the majority who voted favor secession.

The referendum debacle brought Spain and Catalonia closer to a potentially disastrous showdown as each side said Sunday’s events proved them right and neither looked prepared to cede ground.

Catalan president Carles Puigdemont will chair the Cabinet meeting, which is expected to consider asking the regional parliament to vote on an historic independence declaration later in the week.

Spanish Prime Minister Mariano Rajoy, meanwhile, will meet with ruling Popular Party leaders before seeking a parliamentary session to discuss how to confront the country’s most serious crisis in decades.

He also called an afternoon meeting with the leader of the main opposition Socialist party to discuss Spain’s options.

The impasse developed after Catalan authorities decided to go ahead with Sunday’s referendum even after Spain’s Constitutional Court suspended it. The Spanish central government denies the referendum even took place, while Catalan separatists say it was valid and justifies making a final break with Spain.

Catalonia said preliminary poll results showed 90 percent favored independence after less than half the electorate voted in a day that saw 893 people injured in clashes with riot police. Catalonia’s health services said four people remained in the region’s hospitals, two of them in serious condition.

In addition, 33 police officers were injured.

Clashes broke out at a number of voting locations after riot police turned up to prevent people from voting and to confiscate ballot boxes.

Some Catalonians said both sides were responsible for the mayhem.

“I am very annoyed for the both sides involved in what happened yesterday,” said Eric Tigra, 56. “I think both sides involved committed grave mistakes. But we must also highlight that if the people of Catalonia go out in the streets and you don’t listen to them then something is not working right.”

Catalan leaders accused Spanish police of brutality and repression while the Spanish government praised the security forces for behaving firmly and proportionately.

Videos and photographs of the police actions featured on the front page of news media outlets around the world.

In an editorial, leading Spanish daily El Pais blamed the Catalan government for Sunday’s “shameful” events but also criticized the Spanish government for its inability to tackle the crisis that began about seven years ago. The newspaper said the day was “a defeat for our country.”

So far, the European Union, the U.S. and most international bodies have backed Spain in its stance against Catalonian independence.

The EU on Monday urged all sides in Spain to move from confrontation to dialogue.

“These are times for unity and stability,” said EU spokesman Margaritis Schinas.

Those in favor of secession argue that the region contributes more to the national government than it receives in return. Catalonians already enjoy a wide measure of autonomy but the central government still controls taxation and other financial levers, as well as infrastructure projects.

MADRID, Oct 4: Catalonia’s regional government is mulling when to declare the region’s independence from Spain in the wake of... Read More...

MUGU, April 13: The fifth cabinet meeting of Karnali province held on Friday on the shores of Rara Lake in Mugu... Read More...