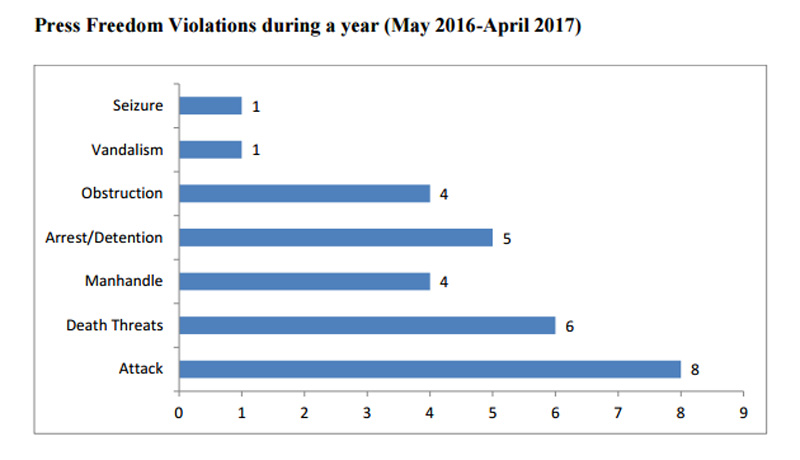 KATHMANDU, May 3: Nepal saw relatively improved atmosphere for press freedom resulting in significant decline on number of intimidation against media and media persons, according to a report published by Freedom Forum on Wednesday.

According to the report unveiled on World Press Freedom Day, Freedom Forum recorded a total of 29 incidents of press freedom violations which affected 80 media persons across the country in the monitoring time of 2016 May to 2017 April. Compared to the last year, it is the improvement, for 59 cases of violations were recorded last year, in which more 100 journalists were affected. This year, there were 12 cases of attack or manhandle, which is followed by death threats, 6; and brief arrest, 5 according to the report.

During this time, 19 journalist and bloggers were killed around the world, according to International Federation of Journalists.

According to the media monitoring report, Province- 3 recorded highest number of violations (15), where Kathmandu Valley itself witnessed 13 incidents. Likewise Province- 2 recorded 9 followed by 3 in Province 7, one each in Province 1 and 5. Province 4 and 6 recorded zero cases of press freedom violation.  During the year, 4 cases were found related to Internet-based media, which includes online news portal blockade and journalists' issued threats through social media (Facebook).

70 cases of press freedom violation in a year: FNJ

KATHMANDU, May 4: As many as 70 incidents of press freedom violations were recorded in a year from May 2016 to... Read More...

FDI pledges from China in Nepal's tourism sector amounts Rs 5.35 billion in the first two months of the current fiscal year
6 hours ago