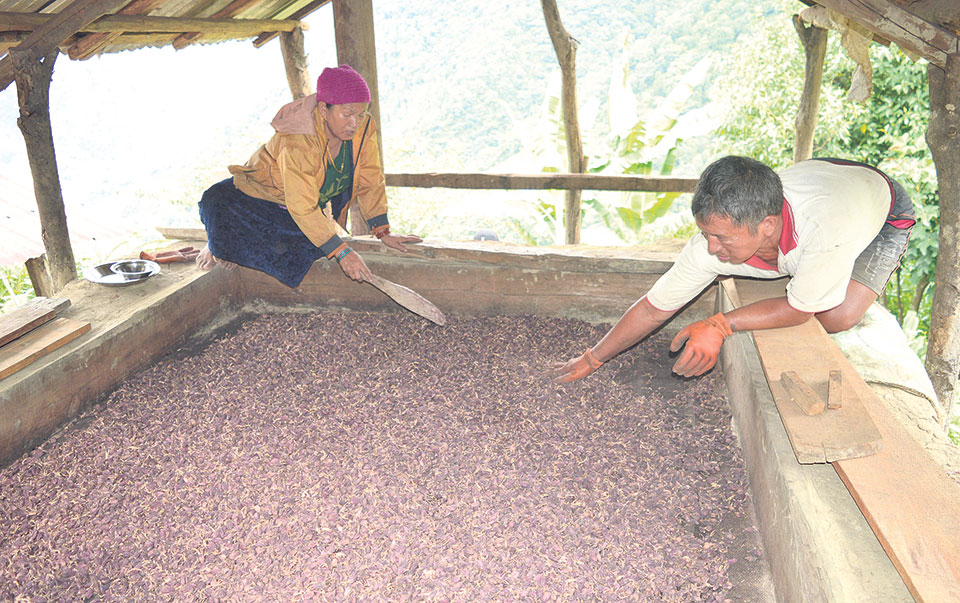 LAMJUNG, March 3: Farmer’s earning from cardamom has fallen down drastically this year compared to the previous year. As a result, farmers’ income has been affected in Lamjung district.

This year, farmers have faced losses amounting to Rs 85 million compared to the previous year.

Although the number of cardamom farmers is increasing each year, the price of cardamom is going down, to keep with the decreasing price in international market.

Farmers from the district had earned total of Rs 130 million in the previous year, while this year they have earned only Rs 45 million from the cardamom produced in the district.

This year, the farmers have to sell their cardamom at Rs 600 to Rs 700 per kilogram, which is nearly half the price compared to the previous year. However, coming to the end, some of the cardamom has got the price up to Rs 1,000 per kilogram.  Currently a total of 986 hectare of land has been covered by cardamom farming in the district. Of which, only 650 hectare of land is producing first-rate cardamom.

From that 650 hectare of land, total 600 quintal of cardamom has been produced this year, said Ajay Tamang, district chairperson of Federation of Large Cardamom Entrepreneurs of Nepal. Meanwhile, in the previous year, 821 quintal of cardamom was produced from the same area of land. In recent years, the number of cardamom farmers are increasing remarkably in the district as cardamom farming is allowing farmers to have good income. The district is also being introduced as a cardamom hub due to increasing production.

Cardamom produced in Lamjung has a huge demand in the market, especially in India. The federation is further planning to supply cardamom to the third countries too.

Currently there are 35,000 cardamom farmers in the district.  As stated by the federation, Marsyangdi Rural Municipality has produced more cardamom than the other local bodies. Similarly, farmers from Ludi, Khanche, Bajhkhet, Khinchowk and Tarachowk have also produced large amount of cardamom this year.