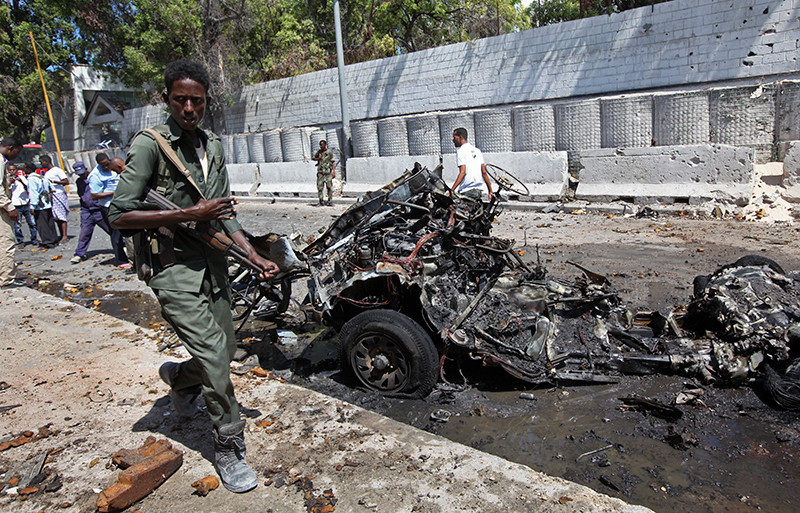 Somali soldiers walk near the wreckage of a car bomb attack in Mogadishu, Somalia Friday, March 24, 2017. A police official says the car bomb exploded near a restaurant and hotel in Somalia's capital killing at least one person and wounding others. (AP)

Several others were injured in the blast near the ministries of internal security and youth and sports in Mogadishu, Col. Ahmed Hashi said.

There was no immediate claim of responsibility for the blast. However, the al-Qaida-linked Islamic extremist group al-Shabab group often carries out such attacks.

The extremists have been pushed out of the capital and other major urban areas in Somalia by national and African Union multinational forces, but they continue to carry out deadly bombings and attacks in Mogadishu and elsewhere. Targets have included hotels, military checkpoints and the presidential palace.

Al-Shabab has denounced new Somali-American President Mohamed Abdullahi Mohamed as an "apostate" and warned Somalis against supporting him. Al-Shabab was kicked out of Mogadishu under Mohamed's brief term as prime minister in 2010-2011.

Mohamed, who was elected in February, has vowed to make security a priority in the long-chaotic nation where the fragile central government is trying to extend its control beyond selected areas including the capital.

KMC permits all schools to reopen physical classes
6 hours ago

Country will move ahead towards prosperity along with fresh mandate: Minister Gurung
21 hours ago

We’ve brought in wave of development in the country: PM Oli
2 hours ago