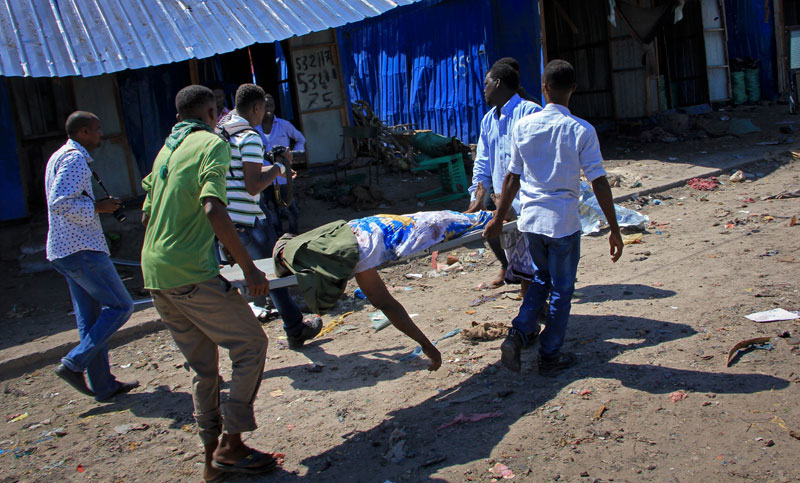 MOGADISHU, Somalia, Dec 11: A suicide car bomber killed at least 16 people and injured nine others at a police station in the Somalia capital, a Somali police official said Sunday.

At the blast scene, medical workers carried bodies burned beyond recognition to ambulances. Human limbs and bloodied shoes were scattered across the blast scene.

Most of the victims are port workers and police officers.

Somalia's Islamic extremist rebels, al-Shabab, claimed responsibility for the attack, the second blast in the seaside capital in two days. The insurgents said they had killed "apostates" in the attack, according to the group's Andalus radio.

On Saturday, a suspected suicide car bomber detonated an explosives-laden vehicle at a security checkpoint near Mogadishu when soldiers stopped him for security checks.

Despite being ousted from most of its key strongholds in south and central Somalia, al-Shabab continues to launch deadly guerrilla attacks against the Somali government and African Union forces across large parts of the horn of Africa nation.

More than 22,000 peacekeepers are deployed in Somalia in the multi-national African Union force. Al-Shabab opposes the presence of the foreign troops.

A surge in attacks by al-Shabab could lead to further delays in the country's presidential elections, which have been set for Dec. 28.

The elections have already been delayed three times.

A car bomb blast killed at least 12 people and wounded 50 others at a vegetable market in eastern Baghdad... Read More...

Two arrested on charge of rape
10 minutes ago