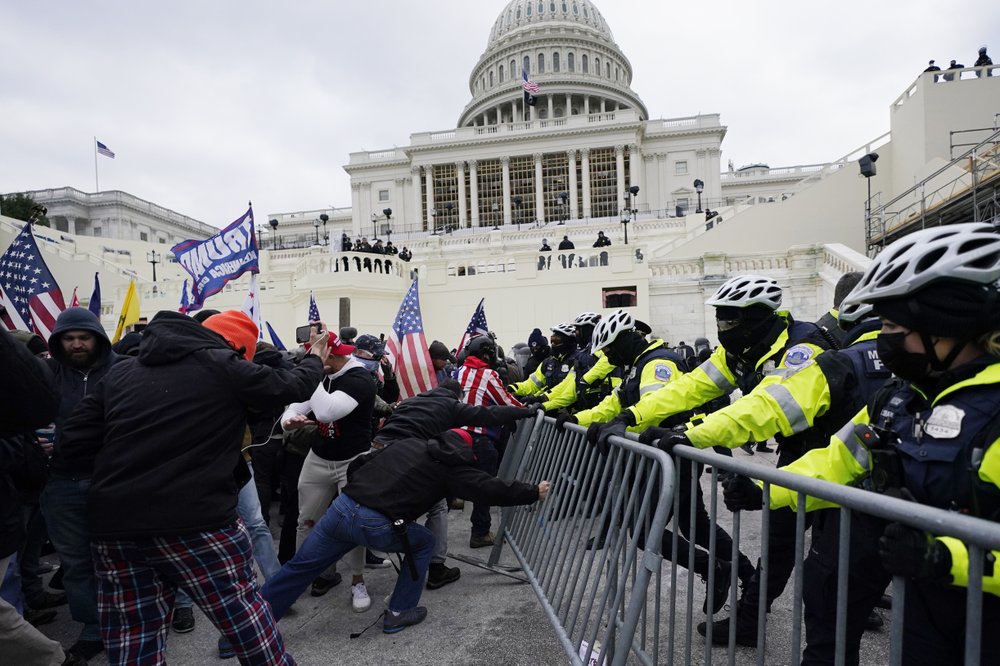 Trump supporters try to break through a police barrier, Wednesday, Jan. 6, 2021, at the Capitol in Washington. (AP Photo/Julio Cortez)

WASHINGTON, Jan 11: Under battle flags bearing Donald Trump’s name, the Capitol’s attackers pinned a bloodied police officer in a doorway, his twisted face and screams captured on video. They mortally wounded another officer with a blunt weapon and body-slammed a third over a railing into the crowd.

“Hang Mike Pence!” the insurrectionists chanted as they pressed inside, beating police with pipes. They demanded House Speaker Nancy Pelosi’s whereabouts, too. They hunted any and all lawmakers: “Where are they?” Outside, makeshift gallows stood, complete with sturdy wooden steps and the noose. Guns and pipe bombs had been stashed in the vicinity.

Only days later is the extent of the danger from one of the darkest episodes in American democracy coming into focus. The sinister nature of the assault has become evident, betraying the crowd as a force determined to occupy the inner sanctums of Congress and run down leaders — Trump’s vice president and the Democratic House speaker among them.

This was not just a collection of Trump supporters with MAGA bling caught up in a wave.

That revelation came in real time to Rep. Jim McGovern, D-Mass., who briefly took over proceedings in the House chamber as the mob closed in Wednesday and the speaker, Rep. Nancy Pelosi, was spirited to safer quarters moments before everything went haywire.

“I saw this crowd of people banging on that glass screaming,” McGovern told The Associated Press on Sunday. “Looking at their faces, it occurred to me, these aren’t protesters. These are people who want to do harm.”

“What I saw in front of me,” he said, “was basically home-grown fascism, out of control.”

Pelosi said Sunday “the evidence is that it was a well-planned, organized group with leadership and guidance and direction. And the direction was to go get people.” She did not elaborate on that point in a ”60 Minutes” interview on CBS.

The scenes of rage, violence and agony are so vast that the whole of it may still be beyond comprehension. But with countless smartphone videos emerging from the scene, much of it from gloating insurrectionists themselves, and more lawmakers recounting the chaos that was around them, contours of the uprising are increasingly coming into relief.

Explainer: Can Trump be removed from office before his term ends on Jan. 20?

UNITED STATES, Jan 7: The storming of the U.S. Capitol by supporters of President Donald Trump on Wednesday has prompted... Read More...