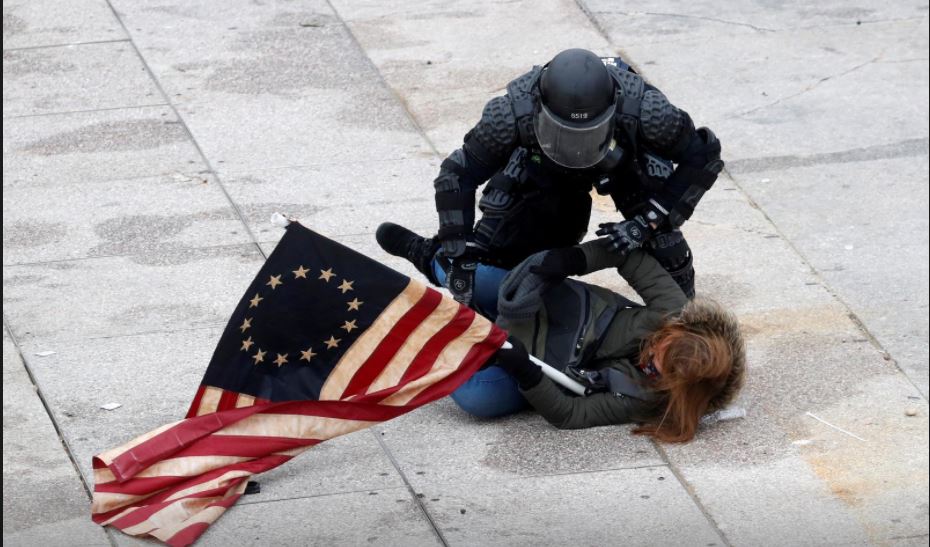 A police officer detains a pro-Trump protester as mobs storm the U.S. Capitol, during a rally to contest the certification of the 2020 U.S. presidential election results by the U.S. Congress, at the U.S. Capitol Building in Washington, U.S, January 6, 2021. REUTERS/Shannon Stapleton

In a late-night news conference, Contee said that 47 of the 52 arrests to date were related to violations of Mayor Muriel Bowser’s 6 p.m. curfew, with 26 of those involving people arrested on U.S. Capitol grounds.

Several others were arrested on charges related to carrying unlicensed or prohibited firearms.

In addition, Contee said, two pipe bombs were recovered from the headquarters of the Republican and Democratic national committees, as well as a cooler from a vehicle on U.S. Capitol grounds that contained Molotov cocktails.

Contee declined to identify the woman a Capitol Police officer shot and killed, saying next of kin notification was still pending.

Three other people died on Wednesday because of medical emergencies, he added.

Trump says his term is ending, transition will be orderly

WASHINGTON, Jan 7: President Donald Trump for the first time acknowledged his defeat in the Nov. 3 election and announced there... Read More...

Explainer: Can Trump be removed from office before his term ends on Jan. 20?

UNITED STATES, Jan 7: The storming of the U.S. Capitol by supporters of President Donald Trump on Wednesday has prompted... Read More...