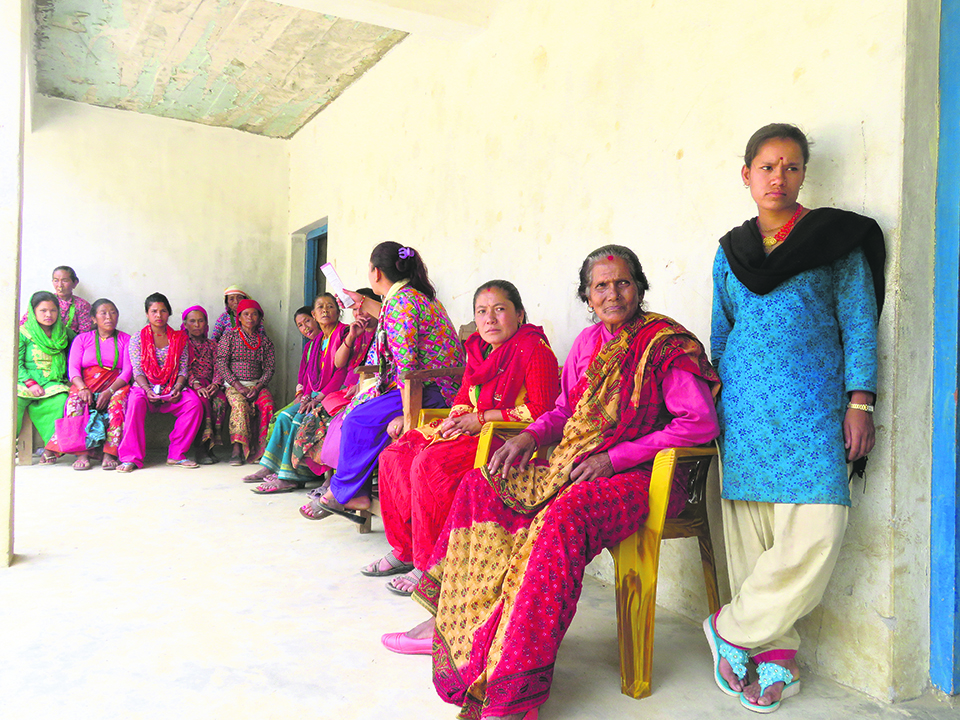 RAMECHHAP, June 22: Baduli Basel, 54, of Torakpur village in Doramba Rural Municipality was having health problems since quite some time. Fatigue, dizziness, fever and discharge of dirty water from vagina had been bothering the mother of four. In lack of health center nearby, going for medical test did not cross her mind. “I was feeling weak. Even little work would exhaust me.

However, I thought things would be normal someday and did not visit any doctor,” Basel said.

“After check up, they told me that I need medical intervention without any delay. They said I had a kind of cancer. It was identified as cervical cancer,” she said.

Cervical cancer is very common among women throughout the world. But the lack of immediate medical help makes women of the poor countries suffer silently. According to International Agency for Research on Cancer, it was responsible for 275,000 deaths in developing countries in 2008.
In Nepal, women’s health situation in the rural areas is grim.

The World Health Organization has ranked cervical cancer as the most common cancer among Nepali women aged between 15 to 55. Similarly, breast cancer is affecting women no less. While uterus, vagina and breast-related health issues are hardly discussed in general in Nepali society, the situation is worse in the rural areas. And this has taken a serious toll on women’s health.

“I would have talked about my problem right in the beginning, if it was in any other part of my body. But how could I discuss such a thing? But doctors told me that cancer gets very serious if not detected and treated on time,” narrated Basel. “Had I been an educated person, maybe I would not have had to suffer this much.”

Lots of women had gathered at the camp on Saturday. Shyness among them was still apparent. They were not accompanied by family members.

“Women feel odd to tell about their health problems to their family members. They would not even have come here for check up if they were not insisted,” said Basel. “We were told by fellow women and local health volunteers that this camp gives service for free.”

Another attendee at the camp Hom Kumari Kandel of Tokakpur stated that the health post in her village does not provide even a paracetamol, let alone offer greater medical service.
“If such health camps are not organized time to time, women here can never come to know about their health problems,” she said.

She urged for more health camps for women. Stating that rural women cannot make it to big hospitals on their own, she demanded that the government organize such mobile services on a regular basis.

“We don’t have good hospitals around here. There is no pharmacy, medicines or anything as such,” Kandel said.

Over 100 women benefitted from Saturday’s health camp, according to the organisers. They were tested for breast, ovary and uterus cancer and other related problems.
According to Anusha Sharma, a doctor with the NCHRC, many women were found to have developed symptoms of cancer.

“The problem is the lack of awareness. They do not take the symptoms seriously as they are not aware of cancer. And this prevents detection of the disease at an early stage, “she said.

According to Sharma, women with cancer not only need medical help, but also some counseling. Since the word cancer itself makes them feel nervous, they need to be told that cancer is curable.
“The camp was helpful in detecting their health problems. But while informing them of their health status, it should also be made sure that they should be given assurance that cancer is not a killer, it can be cured,” she said.

Cervical cancer check-up facility has been recently introduced by the District Hospital of Ramechhap as well. However, in the rural villages, women are not much aware of this.

CHITWAN, Oct 6: BP Koirala Memorial Cancer Hospital of Bharatpur, which is a major government-run hospital in the country for treatment... Read More...

CHITWAN, Oct 5: BP Koirala Memorial Cancer Hospital of Bharatpur, which is a major government-run hospital in the country for... Read More...