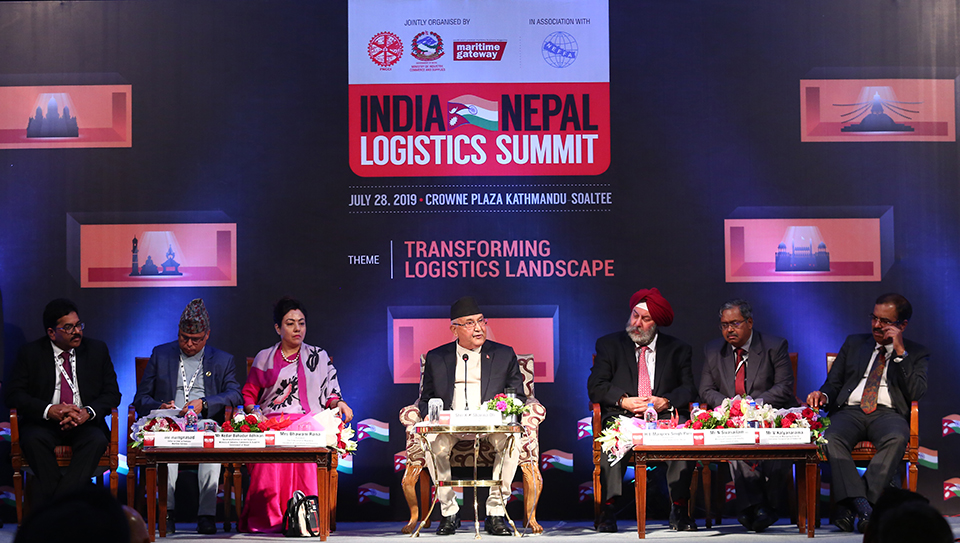 KATHMANDU, July 29: Economists and experts of Nepal and India have stressed the need to increase the competitiveness of Nepali products and improve logistics services to gradually bring down Nepal's widening trade deficit with its southern neighbor.

“No matter what port we use, the service providers company has to be responsible for the delays. So, the traders should be very critical while choosing service providers," said Deepak Tiwari, president of Container Shipping Line Association, addressing the India-Nepal Logistics Summit in Kathmandu on Sunday.

The summit was organized jointly by the Ministry of Industry, Commerce and Supplies; Federation of Nepalese Chambers of Commerce and Industry (FNCCI); and Maritime Gateway magazine of India. "If a service provider does not add value and does not become cost-effective, they should move out,” he said.

Similarly, Rajan Sharma, former president of Nepal Freight Forwarders Association, said importers are failing to identify the right service provider within Nepal and asking exporter to handle everything. "In such a situation, the product supplier wants to make money in between. This creates a problem," he said, adding: "The government of Nepal, through Nepal Rastra Bank (NRB), is trying to make this more accountable, transparent and traceable. However, there is resistance from Nepal Chamber of Commerce (NCC),” Sharma added.

Sharma added that the association is positive about the Electronic Cargo Tracking System (ECTS) introduced recently. "The consignments under ECTS are under the jurisdiction of the port and customs. They pass it to CONCOR - a public entity under India's Ministry of Railways. As the consignments come straight from the port to the border, there is no significance of ECTS in this route,” he added.

Earlier, inaugurating the program, Prime Minister KP Sharma Oli, said that the government was working to ease trade procedures and aggressively working on diversifying trade routes. “Apart from rail and road routes, we are in talks with the Indian government to explore waterway through the Gandak River," he said. He added that Integrated Check Post (ICP) will be opened at Biratnagar Customs Office very soon. “We are also planning to bring ICP in Bhairahawa and Nepalgunj into operation,” he said, adding that the government was studying the prospects of using Dhamra port in Orissa for Nepal's foreign trade.

Commenting on the summit, Indian ambassador to Nepal Manjeev Singh Puri said that this kind of economic dialogue is needed to strengthen economies of both the countries.

Similarly, Bhawani Rana, president of FNCCI said that many strategic decisions have to be taken forward at the government level after this summit.

Likewise, Anant Swaroop, Joint Secretary, Logistics, Ministry of Commerce and Industry, Government of India, said that India was trying to integrate various modes of transportation in the entire logistics ecosystem in the draft of National Logistic Policy which it is preparing. "In the policy, we will include issues about scaling, packaging, transportation for faster inter-state movement, so that our competitiveness increases,” he said, adding: “Nepal will be definitely benefited by this policy. Most importantly, the country will get facilities through the efficient port.”

He also said that Nepal should focus on bringing competitive products for balancing a huge trade deficit between two countries rather than bringing protectionist policies.

PARSA, Dec 5: The export of Nepali products to neighboring India and other countries through the Birgunj Customs Office has... Read More...

Trade deficit jumps up 24 per cent

KATHMANDU, May 16: Nepal has seen a ballooning trade deficit of billions of rupees annually as it failed to adopt... Read More...