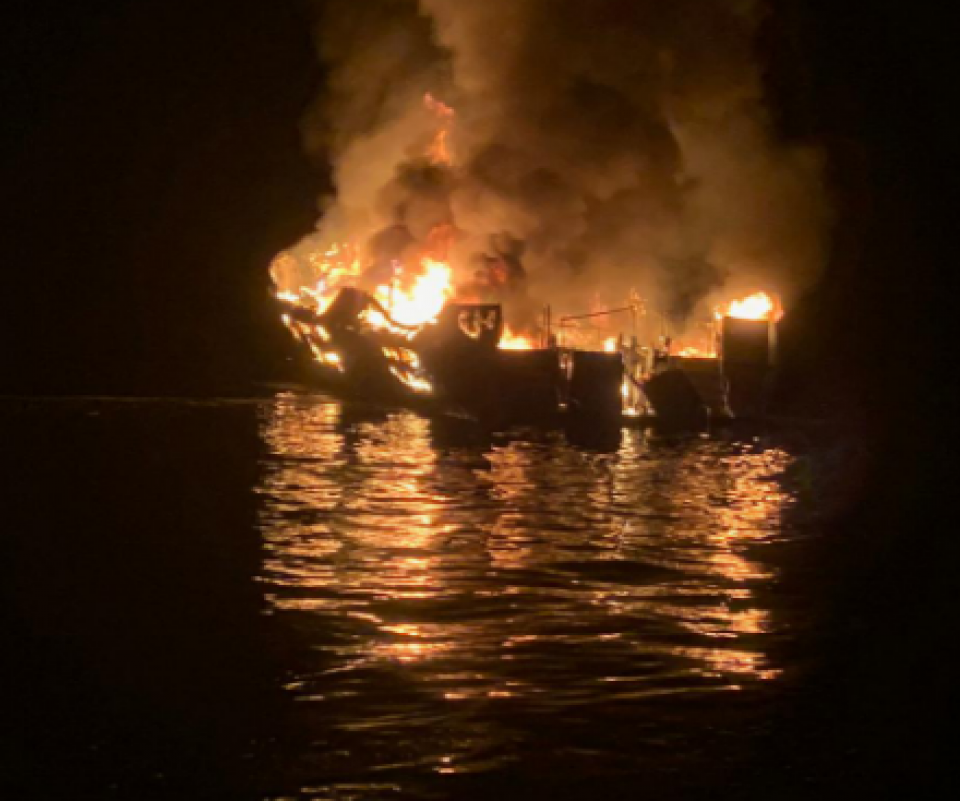 SANTA BARBARA, CALIFORNIA: Sept 3: Divers have found a total of 25 bodies on Monday after a pre-dawn fire sank a scuba diving vessel off a Southern California island, leaving nine people unaccounted for as the search continued, media reported.

Representatives for the Coast Guard’s division in Los Angeles and the Santa Barbara Sheriff’s Office could not immediately be reached to confirm the report from the Associated Press, which cited the U.S. Coast Guard.

The Santa Barbara sheriff had earlier confirmed eight people had died after a fire broke out aboard the Conception, a 75-foot (23-metre) boat, at about 3:15 a.m. (10:15 GMT) on Monday while it was moored just off the shore of Santa Cruz Island.

The Conception had embarked for California’s Channel Islands on Saturday morning with 39 people on board. Five crew members who were above deck on the bridge escaped the fire as passengers slept in the ship’s lower quarters.

“This isn’t a day that we wanted to wake up to for Labor Day and it’s a very tragic event, Coast Guard Captain Monica Rochester told a news conference earlier on Monday, saying the search would continue throughout the night.

Santa Barbara County Sheriff Bill Brown earlier told reporters eight bodies had been found on the ocean floor and in the area of the sunken vessel, which lies upside down under more than 60 feet (18 meters) of water.

Flowers are seen at a makeshift memorial near Truth Aquatics as the search continues for those missing in a pre-dawn fire that sank a commercial diving boat off a Southern California island near Santa Barbara, California, U.S., September 2, 2019. REUTERS/Kyle Grillot

Authorities were trying to determine the best way to recover the sunken vessel, including the possibility of towing it to shore, Brown added.

The surviving crew members sought refuge on a fishing boat moored a few hundred feet away, banging on the side to wake up Bob Hansen and his wife, who were sleeping onboard.

“When we looked out, the other boat was totally engulfed in flames, from stem to stern,” Hansen said in an interview with the New York Times. “There were these explosions every few beats. You can’t prepare yourself for that. It was horrendous.”

Scuba or propane tanks on the Conception may have exploded in the fire, but that had not been confirmed, Brown said, adding it was unclear if there was an initial explosion that caused the fire.

After borrowing clothes from the Hansens, some crew members headed back toward the Conception to look for survivors without luck, Hansen said.

U.S. Senator Dianne Feinstein, a Democrat who represents California, called for an investigation.

“It’s inconceivable that with all the safety regulations we have in place today, a fire on a boat can lead to the loss of life we saw this morning,” she said in a statement. “And we need to understand exactly how the crew was trained and, if they were awake and above-deck, why they were unable to alert or help rescue passengers.”

Investigators said a single mayday call came from the boat reporting the fire.

“It happened quickly enough so many people could not get off,” U.S. Coast Guard Lieutenant Commander Matthew Kroll told CNN.

The diving boat was chartered by Worldwide Diving Adventures, a Santa Barbara, California, excursion firm. It said on its website that the Conception was on a three-day excursion to the Channel Islands, and was due back in Santa Barbara at 5 p.m. on Monday.

The boat’s owner, Truth Aquatics, referred queries about the accident to a joint media center. “This is still an ongoing search and rescue,” it said.

REDDING, July 29: Human remains believed to be that of a missing elderly woman and her two great-grandchildren were found... Read More...