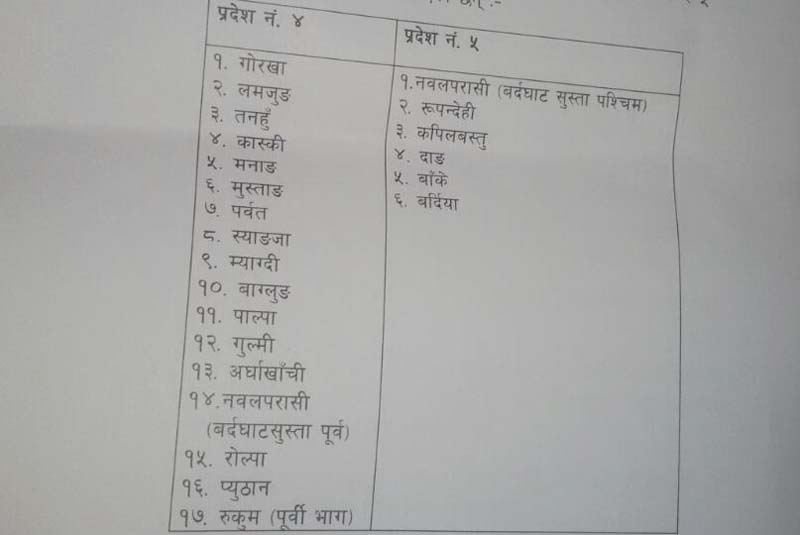 KATHMANDU, Nov 29: The government has registered a bill for the second amendment to the Constitution of Nepal with the objective of addressing the demands raised by the agitating federal alliance, thereby expanding the scope of acceptability of the national charter. The bill was registered at the Legislature-Parliament Secretariat this evening.

Earlier, the meeting of the Council of Ministers held at the PM's Baluwatar residence had decided to include for issues for amendment in the constitution, according to Minister for Physical Infrastructure and Transport Management Ramesh Lekhak.

The issues covered are concerning recognition of all mother tongues, naturalized citizenship, provincial representation in the national assembly and demarcation of federal units.
Accordingly, the government has proposed amendment to Article 6 of the Constitution to include all the mother tongues in the schedule of the constitution, on the recommendation of the Language Commission. The Commission will select and identify the languages.

This is only some adjustments made to the already existing provision including in the Citizenship Acts, Minister Lekhak said.

Likewise, the third issue relating to representation to the National Assembly includes amendment to now ensure representation of three including a woman, a dalit and a person with disability from every province to the Assembly. This will take the total representatives from the seven provinces to 21. The remaining 35 are allocated seats based on the proportion to the population of the concerned province. Of the 35 members, 14 will have to be women, as provided by the federal law, the Minister said.

As per the proposed amendment, the number of women represented to the National Assembly depends on the population of women in the particular province.

The fourth issue covered in the amendment proposal is related to the delineation of federal units. To work it out, the Schedule 4 of the new constitution is amended.

Likewise, West of Bardaghat in Nawalparashi, Rupandehi, Kapilvastu, Dang, Banke and Bardia are in province no 5.

Today's meeting has decided to present the amended federal delineation to the parliament after endorsing by the Council of Ministers.

Moreover, today's cabinet meeting has also agreed to form federal delineation commission and its agenda has been determined, according to Minister Lekhak.

The dissenting political parties were also consulted while determining the constitution amendment proposal and consultations will continue.

KATHMANDU, Jan 8: Amidst protest from the Opposition parties, the government has tabled the controversial constitution amendment bill in parliament... Read More...

The trials of Aung San Suu Kyi, from heroine to villain to convict
58 minutes ago