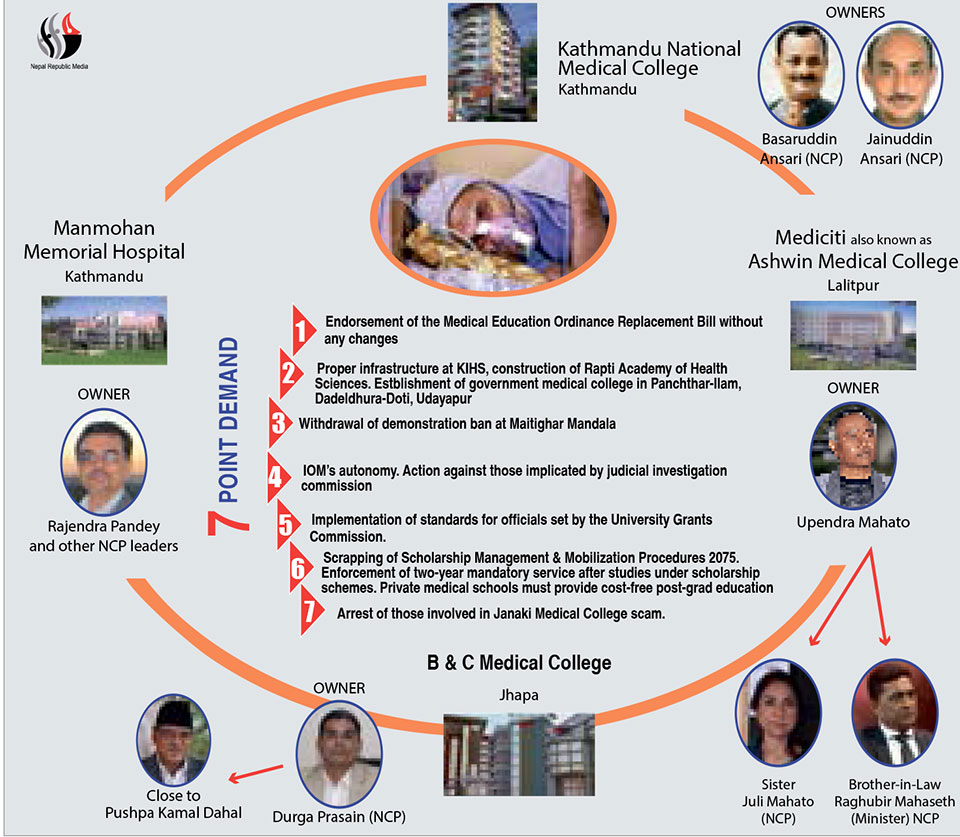 KATHMANDU, July 5: The replacement bill for the National Medical Education Ordinance has been altered only to serve the business interests of leaders of the Nepal Communist Party (CPN), the new joint avatar of the former CPN-UML and the CPN-Maoist Center.

The replacement bill, which was being fast-tracked through parliament by the Ministry of Education, Science and Technology (MoEST), came under controversy for modifying some of its major provisions. Following the changes, Dr Govinda KC began his 15th fast-unto-death, from June 30 in Jumla. The senior orthopedic surgeon and professor at the TU Institute of Medicine has already staged fasts-unto-death 14 times in the past to press for reforms in medical education in Nepal.

The bill has been held up after the main opposition party Nepali Congress threatened to halt the parliamentary session and demanded that the bill be brought through a regular process.

According to different sources, the bill was changed to serve the interests of the owners of medical establishments, including CPN leader Rajendra Pandey and others ( who have interests in the Manmohan Memorial Hospital, Kathmandu), Basaruddin Ansari and Jainuddin Ansari (Kathmandu National Medical College, Kathmandu), Durga P Prasai (B & C Medical College, Jhapa) and businessman Upendra Mahato, his sister Juli Mahato and brother-in-law and Transport Management Minister Raghubir Mahaseth (Mediciti, Lalitpur aka Aswini Medical College).

Parliament had approved the Medical Education Ordinance a second time on May 9 a few days after Dr KC threatened to stage a fast-unto-death if the replacement bill was not endorsed through parliament.

The Medical Education Ordinance was brought in the second time after the first ordinance could not be approved by parliament within 60 days of the start of the last parliamentary session on March 4. The bill provisions 75 percent seats under free scholarship in public medical colleges, no new private medical college affiliation in Kathmandu Valley for 10 years, the opening of government medical colleges in all seven provinces, and adoption of single entry MBBS entrance exams.

However, it is obvious that 30-35 provisions of the bill have been changed under pressure from leaders of the ruling party, said advocate Om Prakash Aryal. "No change was made the last last two times the same ordinance was presented for endorsement. Why has it been changed now?" he asked.

"Several provisions have been removed, including those on not issuing letter of intent and affiliation to any new medical college in Kathmandu Valley for 10 years, operation of own hospital for three years for starting a medical college, 75 percent scholarship in public medical colleges, permitting a university to issue affiliation to only five medical colleges, and establishment of government medical colleges in each of the seven provinces ," said Aryal. "Instead, flexible provisions to encourage the private sector have been included to accomodate the business motives of leftist party leaders in the health sector.”Prof Kedar Bhakta Mathema, former vice chancellor of Tribhuvan University and team leader of the medical education taskforce formed three years ago during the previous tenure of then and incumbent Education Minister Giriraj Mani Pokharel, said that their report recommended not opening any new medical college in Kathmandu Valley for 10 years."This provision was included to encourage the opening of medical colleges and their hospitals in other parts of the country. There are already 11 medical colleges in Kathmandu Valley, out of 18 in the whole country," said Mathema. "In the central region, there is one medical college per 800,000 people while there is one medical college per 3.6 million in the western region and zero medical college for the population of 2.5 million in the far west . So we recommended opening medical colleges in other parts of the country than the capital valley so as to bring quality health services within the reach of ordinary folks in rural areas," he added.Khaga Raj Baral, secretary at MoEST, said that the latest changes to the replacement bill were made after the cabinet decided that there was a need for such changes . They also consulted members of the Mathema taskforce on Wednesday, he said.Dr KC's demands include immediate endorsement of the replacement bill for the Medical Education Ordinance, immediate publication of the report of the medical probe commission led by Gauri Bahadur Karki, taking of action against 43 officials, implementation of the report prepared by the employees standards determination committee, revoking of the ban on staging protests at Maitighar Mandala, and formulation of law to discourage threats against doctors and health workers.Similarly, the other demands raised by Dr KC are operating MBBS level classes at the Karnali Institute of Health Sciences Jumla, and bringing a National Medical Education Act in line with the Mathema taskforce report recommendations.

Dr KC, who began staging hunger strikes in 2012 for reform in medical education , initiated his 14th fast-unto-death from January 8. Following the resignation of Chief Justice Gopal Prasad Parajuli as demanded by the doctor, a fast-unto-death scheduled to begin from March 18 was postponed.

Dr KC started a 13th fast-unto-death from October 5, 2017. On October 23, 2017, the then Deuba government approved the Medical Education Act Ordinance as per the recommendations of the Mathema taskforce. President Bidyadevi Bhandari authenticated the ordinance for the first time on November 10, 2017.

KATHMANDU, July 7: Ignoring the demands of Dr Govinda KC, who has been staging a fast-unto-death, and protests from the main... Read More...

Rain with thunderstorm predicted for today
12 seconds ago