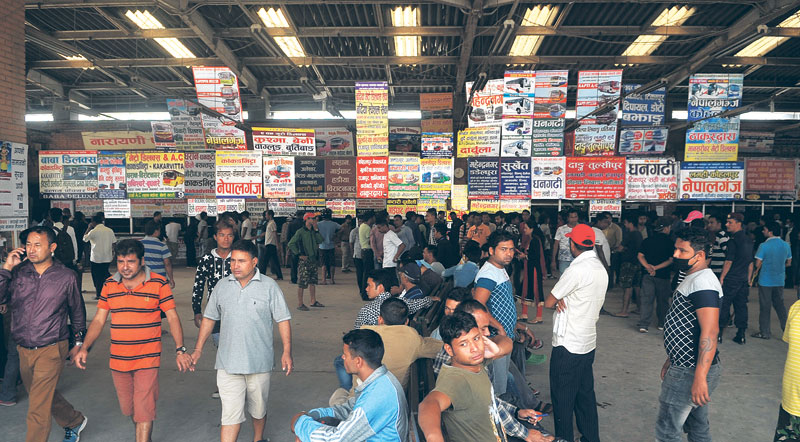 KATHMANDU, Sept 29: With the Dashain festival just three days away, some 90 percent of ticket bookings for buses leaving Kathmandu Valley have already been completed.

However, the demand for tickets is still overwhelming and people headed for their home districts for the festival are complaining.

Sunil Kunwar, managing director of Lhotse Multipurpose Pvt Ltd which oversees ticket bookings and transport at New Bus Park in Kathmandu, said they have already sold 90 percent of the tickets for vehicles heading for various parts of the country for Dashain.

“We are receiving an overwhelming response. Nearly all of our tickets have already been sold since  bookings for travel outside the Valley started from September 23,” he informed. “Ticket sales this year are much stronger compared to the same period a year earlier,” he added.

Ghatasthapana, which falls on October 1 this year, marks the start of Dashain, the biggest festival of the Hindus. Huge numbers of people living and working in the Valley head for their ancestral homes to celebrate the 14-day festival with family and relatives.

Many are complaining about the lack of tickets while some claim to have purchased tickets at the ticket counters at black market rates.

Dipendra Thapa, a permanent resident of Gaighat in Udayapur district, said he paid an additional Rs 500 per ticket for his six-member family. “There is no way you can get home for Dashain if we don't pay extra, and I had to fork out an additional Rs 3,000 for our six tickets,” he said.

Likewise, Naresh Sharma of Dharan payed almost double for his ticket this week. “At other times, the same ticket would cost less than 1,000. But I was forced to pay Rs 1,500. Many of my friends heading out of the Valley for Dashain paid extra for their tickets,” he added.

However, Kunwar of Lhotse Multipurpose said they have adopted strict measures to ensure that tickets do not end up in the black market. “Unlike in previous years, the ticket booking system this year is better managed, and if anyone is found blackmarketing we'll leave no stone unturned to punish them.”

Kunwar also said that around 100-150 more vehicles would be introduced during the festival to handle the large numbers of passengers.

Meanwhile, Bijay Bahadur Swar, senior vice president of the Federation of Nepalese National Transport Entrepreneurs (FNNTE), acknowledged the difficulties of handling the surge in the numbers of people leaving the Valley.

KATHMANDU, Sept 12:Following a long-held dispute between Department of Transport Management and Transport Entrepreneurs, the ticket booking has opened from... Read More...

Soils under Threat
22 hours ago

Hotel entrepreneurs' problems will be solved: Minister Ale
18 hours ago