Bulgarian held for stealing from ATM 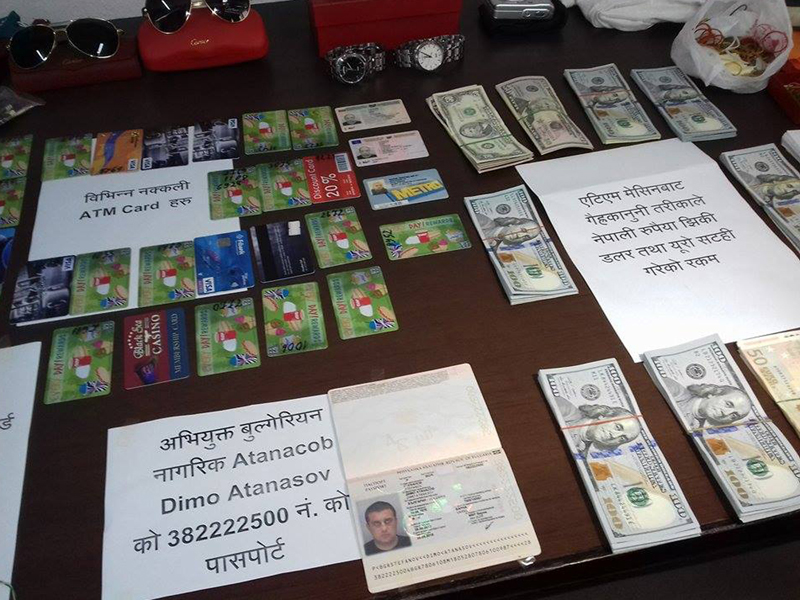 KATHMANDU, Oct 28: The Central Investigation Bureau (CIB) of Nepal Police on Thursday arrested a Bulgarian national on the charge of stealing money from ATM machines though a new high-tech method.

The arrested man has been identified as Dimo Atanasov Stefanov, 38, who entered Nepal on October 10. Acting on complaints by customers at Nepal Investment Bank and Himalayan Bank among others, police had launched a manhunt through CCTV footage from ATM booths suspected to have been targeted by him.

Police were able to identify the suspect and arrested him from an ATM booth in Thamel while he was withdrawing money from Himalayan Bank.

During investigations, police found the Bulgarian attaching electronic devices with a spy camera to record the PIN number entered by the customer while using the ATM, and a chip that reads data from the magnetic strip  on the back of the ATM card.

The devices are so small that they can hardly be noticed at the ATM booths, police said.

The fraudster then transfers the data onto a dummy card to withdraw money, Silwal said.

The police recovered two fake ATM cards, Euros 600, USD 17,250, a laptop, a magnetic strip reader and a camera and skimmer from the Bulgarian.

NIBL Deputy Director Bijendra Suwal said the bank informed police following complaints from customers that they were receiving SMS alerts on money withdrawals from their savings accounts. A recent withdrawal by Stefanov  was Rs 80,000.

Similarly, Himalayan bank has also reported to CIB that USD 6000 was withdrawn by someone in Bulgaria using a similar trick.

Police suspect that criminal groups might be active without being noticed by the banks or their clients.

CIB also arrested three foreigners-- Turkish citizen Mehmet Gullen, Bulgarian Petroslav Hristov and Romanian Preda Aurelian-- on the charge of ATM fraud in the past two years.
Police tips to escape ATM skimming
In order to escape such fraud, police have alerted ATM users to inspect the door access device prior to opening the lobby doors, inspect the machine for items installed over or around the PIN pad of the ATM, cover the keypad with the other hand while typing in the PIN, change the pin number frequently and activate sms to alert the banking system.

MAHOTTARI, Nov 9: Police have arrested a youth on the charge of stealing recharge cards. ... Read More...