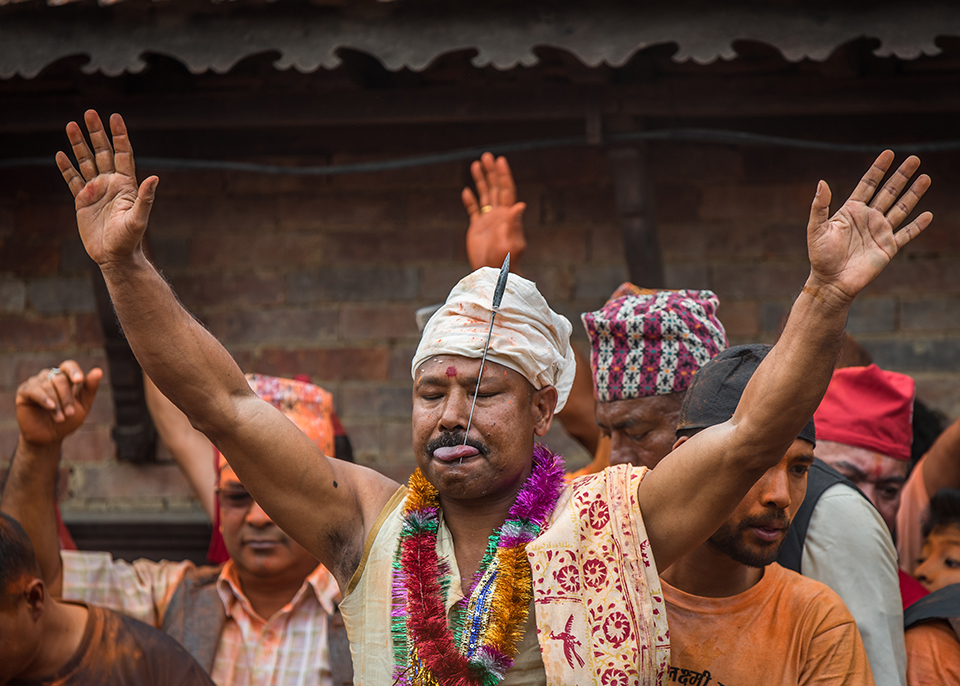 BHAKTAPUR, April 16: Amid the crowd of thousands of people in Madhyapur Thimi of Bhaktapur on Sunday, Buddha Kishna Baag Shrestha pierced his tongue for the sixth consecutive time, giving continuity to the centuries-old tradition of piercing tongue which had started during the period of the Lichchhavi dynasty.

The 46-year-old got his tongue pierced at Bode Higher Secondary School near Layaku Chowk to a rapturous applause from the spectators. The time-honored festival is indigenous to Bode, Madhyapur Thimi. It is observed every year on Baisakh 2 of the Nepali month.

As per the tradition, the tongue should not bleed. If the tongue bleeds while piercing, it is taken as a bad omen, said Juju Bhai who has taken part in the tongue piercing festival for eight consecutive times.

This year, Buddha Krishna came forward to save the tradition after it appeared that the annual tongue-piercing ritual was on the verge of disappearance. He said he volunteered to have his tongue pierced for the sake of continuing this unique ritual that is observed for ages in his locality.

As per the tradition, only a male person belonging to the Shrestha lineage and native of Bode can get their tongue pierced as a part of the ritual. It is considered an expensive ritual for the person as he is required to organize a community feast himself bearing all the expenses.

Madhyapur Thimi Municipality and the Guthi Sansthan under the Ministry of Culture, Tourism and Civil Aviation have been providing some financial support to the tongue-piercing festival. However, the organizers said that the fund is inadequate.

BHAKTAPUR, March 30: Buddha Krishna Bagha Shrestha has come forward this year to get his tongue pierced to give continuity... Read More...

SC gives continuity to its stay order in IGP case

KATHMANDU, March 1: The Supreme Court has given continuity to its previous stay order to the government not to implement its... Read More...