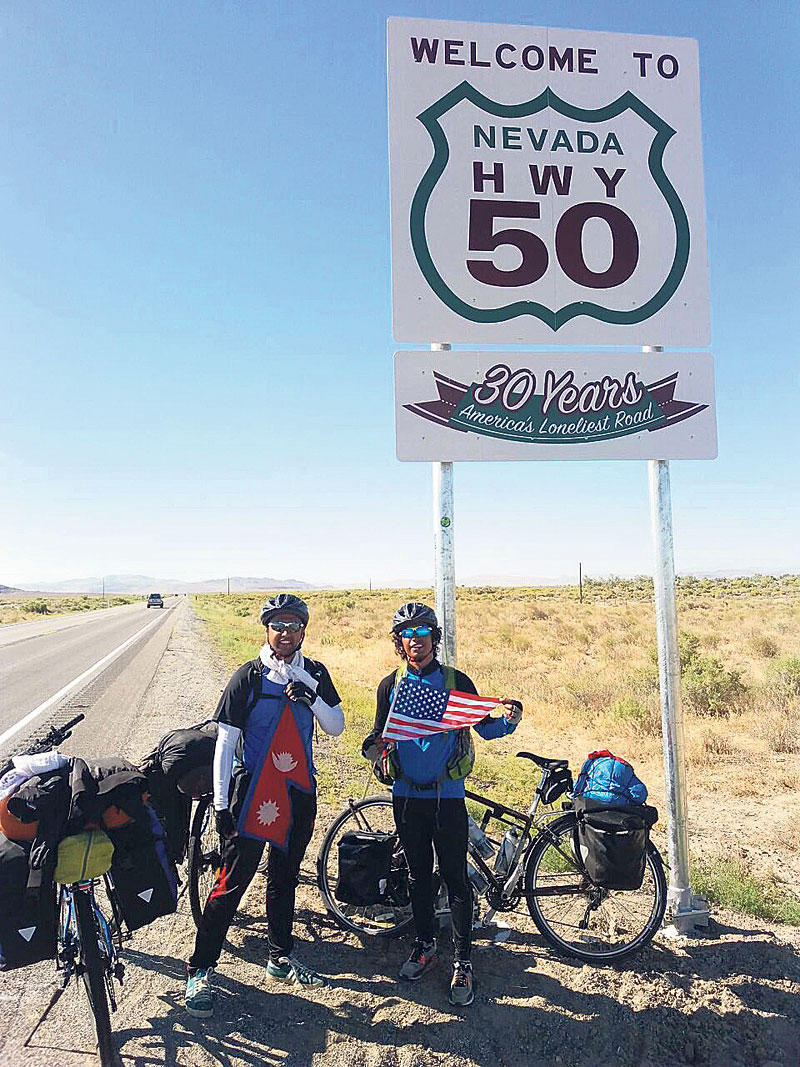 The duo poses for a photo upon their arrival in Nevada, USA in this recent picture.(Photos Courtesy: Dr. Amrit Baral)

Brothers on world bicycle tour to protect environment, fight HIV/AIDS
KATHMANDU, Aug 31: Inspired to do something for protecting environment and fighting against HIV/AIDS, Dr. Amrit and Ajit Baral, two brothers from Baidam-6 of Pokhara, united to embark on a cycling journey across the world back in September of 2015.

Amrit, 29, is a medical doctor by profession, while Ajit, 27, is an environmental activist. They are using the trip to raise awareness on HIV/AIDS prevention and environmental protection by organizing various campaigns.

The cycling tour that started from their hometown Pokhara has taken them across 16 countries about 19,000 miles, calling on people to protect the environment and fight against HIV/AIDS along the way. They have already peddled through India, the Maldives, Sri Lanka, Bangladesh, Myanmar, Thailand, Laos, Cambodia, Vietnam, Brunei, Singapore, Malaysia, Taiwan, South Korea, Japan and the United States of America.

The brothers plan to complete a tour of 100 countries before 2020. The five years of their travel duration includes plans to travel and spread awareness about the issues across Asia, Europe, Australia, New Zealand, Pacific regions, South America North America, Africa and the Caribbean, using planes and other modes of transportation only when they absolutely have to.

“HIV/AIDS is a serious issue not only back in my home country, but across the globe. People diagnosed with HIV/AIDS are abandoned by friends, families and work in Nepal. Seeing their pathetic situation and lack of awareness in the society motivated me to do something for their betterment,” said Amrit over phone. He stressed on the need to protect HIV/AIDS infected from social stigma through awareness and education. He has also conducted health check-up camps in various places during the trip.

For Ajit, the deteriorating environmental changes in their hometown Pokhara drove him to focus his attention on environment conservation. He advocates on discussing environment issues, mostly focusing on pollution, plastic overuse, deforestation, overfishing with specific focus on the more pressing issue of global warming.

[Brothers Dr. Amrit Baral (right) and Ajit Baral (left) discuss sexual health issues with school children in Luangprabang, Laos, during their cycling tour in that country in this undated photo.]

“The three Rs - Reduce, Reuse and Recycle - is the solution to most of the environmental problems we are facing today. That concept is the key to environment protection,” said Amrit, an environmentalist affiliated with a non-governmental organization back in Nepal.

Apart from hosting regular events and giving speeches, the brothers have conducted various productive campaigns in their host countries in collaboration with local organizations working on the similar cause. For instance, in Sri Lanka they organized beach cleaning campaigns for raising awareness about the impact of plastics on marine life.

“Along with Sri Lanka, we also conducted anti-plastic campaigns in Laos and Cambodia after realizing its need there,” informed Amrit.

However, their journey has been far from easy. They have encountered various problems throughout the trip. “Not just the flat tires, running out of water, language difficulties, unexpected change in the weather and taking wrong turns; we have also been robbed off and left stranded in the middle of nowhere,” shared Amrit.

“In one such situation, some guys stole our two bags including our camera, money, medicines and clothes when we were in Sitamadi of Bihar in India. That might have been the end of our journey had it not been for the help of a French traveler, who provided us with a bag, medicines, and some traveling necessities,” he added.

Amrit also recalled taking a wrong turn while cycling from Vientiane to Luangprabang in Laos to volunteer in a project.

After taking Highway number 4 instead of 12, they were stranded for a day and night completely without food and water. Fortunately, they were rescued by local ethnic groups.

“The biggest problem is definitely the weather. Some places are unbearably hot and dry. And the unpredictable nature of weather makes the journey even more difficult,” he said.

At present, the brothers are cycling through the streets of Illinois, USA. Their cycling trip in the USA had started from Santa Rosa, a city in Northern California, from where they peddled across Nevada, Utah, Colorado, Kansas, and Missouri before hitting the streets of Illinois. They would conclude their awareness trip in the USA after reaching New York next, concluding 4,200 miles journey there.

Initially, about 70 percent of their expenses were self funded. However, they later received support from various Nepalese communities like Non-Resident Nepali across the globe and even Nepalese Embassies and also through crowd funding after their causes came to the fore, the duo informed.