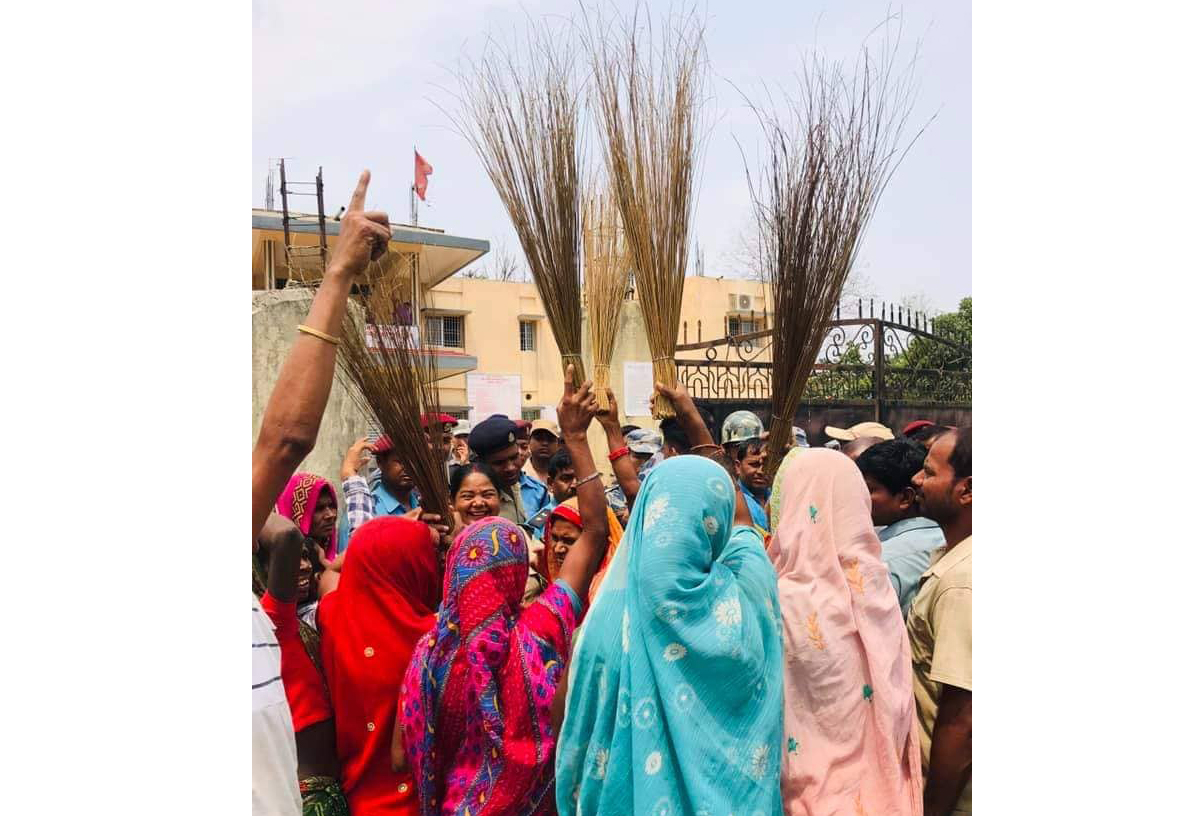 Women protesting outside of the municipal office in Lahan on Tuesday.

LAHAN, April 25: Locals of Lahan were on cloud nine when the government announced the local elections after a hiatus of two decades in 2017. They thought their days would change for good. However, they soon realized that the lofty dreams shown by the representatives and parliamentarians were only for the elections.

Locals of Lahan-4, Ramjanaki Chowk, became furious with the mayor of the municipality after their area was turned into a dumping site on the mayor's orders. This has compelled the residents to live amid continuous bad smell coming from the garbage pile and also risk their health.

Local Prem Kumar Thakur stated that it has become difficult for the people to breath since five tractors carrying garbage were parked at the Ramjanaki Chowk since Sunday. The Lahan-based Waste Processing Center has turned into a garbage storage center of late. Venting their ire against the negligence, locals on Tuesday staged a protest.

The agitating locals also pressurized ward Chief Ramnath Pandit to manage the waste properly. Following which Pandit urged Mayor Muni Sah for help but in vain. "I requested him to do something but he didn't seem to care," said ward Chief Pandit, adding, "Even after my repeated request, he stuck to his decision which has enraged the locals further."

As the locals obstructed the garbage-carrying tractors on Sunday, the municipality parked the tractors in the settlement area. On Monday, locals reached the municipal office chanting slogans against Mayor Sah and carrying brooms in their hands. Later, Mayor Sah called chief of ward 5 along with other representatives to find a measure to resolve the issue.

Local Jitendra Prakash Mahato who participated in the discussion said, "We could not reach a conclusion as the mayor refused our proposal to stop dumping waste in our area." According to him, the parked garbage tractors have increased the risk of an epidemic.During the election campaign, Muni Sah had wooed his voters with his campaign to develop Lahan as a smart city. However, after the elections, Sah has not delivered on even a single promise, say locals.

SARLAHI, May 31: Expressing disappointment over the 'minimum' compensation paid by the government while acquiring land for the construction of the... Read More...

ITAHARI, May 24: The officials of Itahari Sub-Metropolitan City on Thursday boycotted their work, protesting against Mayor Dwarika Lal Chaudhary who... Read More...