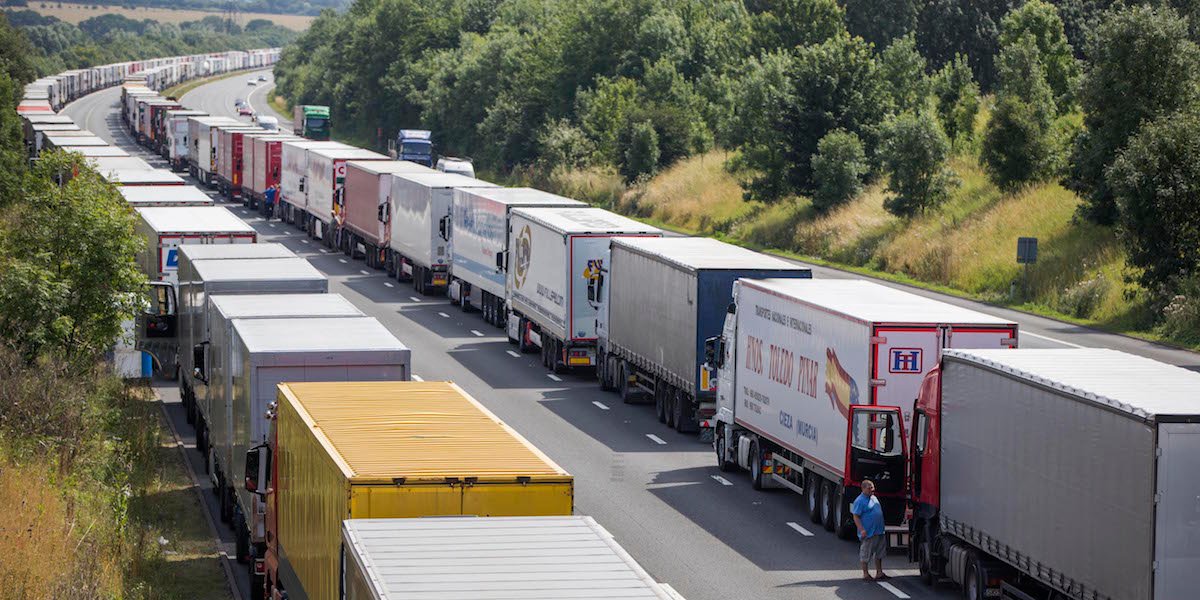 Drivers wait next to their parked lorries on the M20 motorway, which leads from London to the Channel Tunnel terminal at Ashford and the Ferry Terminal at Dover, as part of Operation Stack in southern England, Britain July 31, 2015. Reuters

LONDON, June 24: British lorries would be barred from entering Europe under a no-deal Brexit, according to an industry chief, who warned that British firms would be "crucified" by tariffs if Theresa May fails to secure a deal with the European Union.

James Hookham, deputy chief executive of the Freight Transport Association (FTA), told Business Insider that a no-deal Brexit would see Britain revert to an old set of international arrangements which handed Britain just 103 permits to cover the 300,000 journeys made by British trucks make to Europe every year.

That would, in essence, mean the bulk of Britain's lorry fleet was blocked from entering Europe the day after Brexit in March next year, should May fail to secure the transitional deal which is still being negotiated. This would affect hundreds if not thousands of businesses with EU customers.

"Time is running out," said Hookham. He said the chances of a no-deal Brexit appeared to have increased in recent weeks and described reports that British negotiators do not expect to make sufficient progress at next week's EU summit to sign a transitional deal as "depressing."

Speaking to BI this week, Hookham said the UK would also be compelled to reduce the number of permits to European lorries entering the country, resulting in a serious disruption to the flow of goods which Britain depends upon for food and the bulk of its trade.

He said that industry had been frustrated by ministers in May's government who "dismissed" the reality of "detailed and complicated" problems such as those facing the freight industry.

"The thing that really upsets our members is when a lot of these concerns are just dismissed by politicians as trivial or insignificant," he said.

"They either don't understand what they're talking about, which I suspect is the case, or they've got no basis for saying it."

Why would British lorries be barred from entering Europe under a no-deal Brexit?

Currently, an operator licence for a lorry issued by the UK is effectively valid across the European Union on account of Britain's single market membership. That means a British trucker with a valid licence can drive goods from Dover to Calais and all the way across Europe. The number of available licenses is unlimited.

That arrangement is set to end on Brexit day. Negotiators have not agreed on a policy to replace it. Britain, as the EU's chief Brexit negotiator Michel Barnier is keen to remind his counterparts, will become a third country after Brexit. Third-country licences to operate in Europe are limited in number by an arrangement overseen by an international body called the OECD.

That arrangement means countries have to agree — either multilaterally or bilaterally — on the number of trucks allowed to pass into each other's countries. If Britain failed to strike a deal with the EU before Brexit, it would revert to an old arrangement whereby it had 103 licences.

It would mean companies with European customers or suppliers — those importing components, or exporting products elsewhere in the EU — would be forced to try and find alternative means of shipping their products.

They would also be forced to contend with expensive tariffs under WTO rules once Britain left the EU, which Hookham said would "crucify" many small British firms.

"In what is already a very competitive European market, any permanent additional costs that British exports have to bear mean they've got to work even harder to stay competitive," he said.

"If we crash out without a deal, the tariffs alone would probably crucify most smaller businesses. We need a trade deal which reduces as many of these impediments as possible."

Leader Yadav warns of next movement

DHANUSHA, Oct 25: Chairman of the Federal Socialist Forum, Upendra Yadav, has warned of a fresh people's movement if the... Read More...