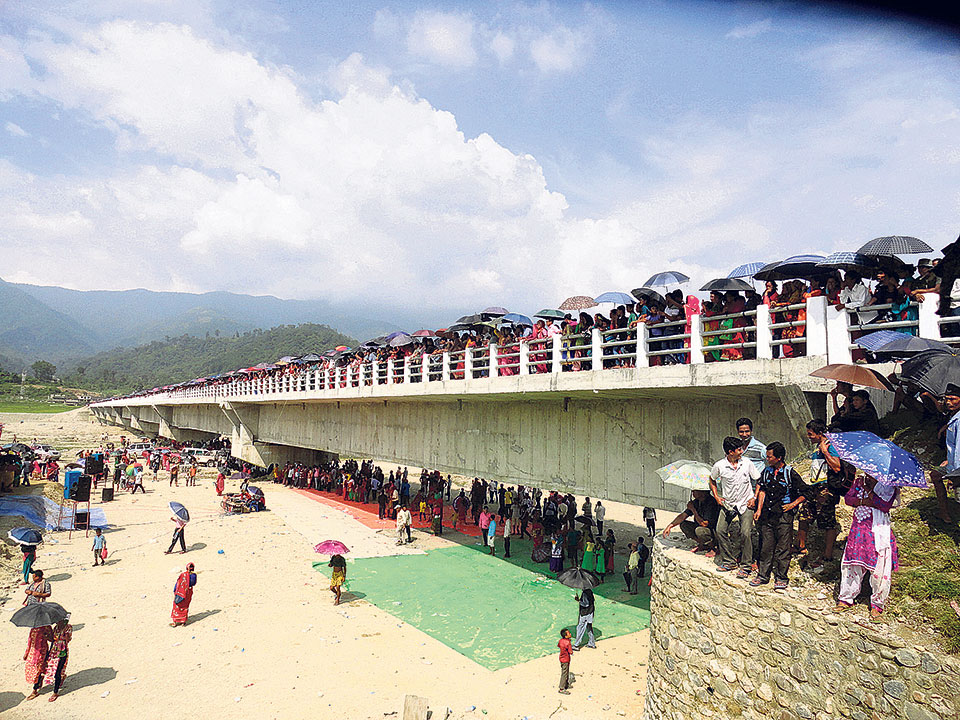 SINDHULI, Sept 6: At a time when almost all the development projects in the country remain incomplete even after crossing the deadline, construction of a 400-meter motorable bridge that connects ward 4 and 6 of Marin Rural Municipality in Sindhuli has set a new precedent.

Construction of the concrete bridge, which provides a safe pathway to cross the Marin River, was completed 15 months prior to its deadline. It was inaugurated on Wednesday by Nepal Communist Party (NCP) Chair and former Prime Minister Pushpa Kamal Dahal.

Praising the timely completion, Dahal said the construction team has set a good example for the country.

“There is a popular belief that all contractors cheat and all employees take a bribe. This successful project has challenged that mentality to some extent,” said the NCP chair.

Dahal further expressed hopes that the country would take a great leap in the development of infrastructures, industries and health education in the next five years.

The contract was handed to Kalika-Rasuwa-Tudi JV, a company based in Kathmandu, on July 13, 2016. As per the contract, the company was supposed to construct the bridge by January 13, 2020. In an exemplary move, the company completed the work almost one-and-a-half years prior to the deadline. It took the company only 20 months to complete the bridge since it started the construction.

In contrast, construction of a bridge over the Kamala River in Sindhuli has been halted even after eight years past its deadline. When completed, the bridge is supposed to connect Ranibas and Hatpate.

Pappu Construction is responsible for constructing the bridge. The contractor's sheer negligence has caused great inconvenience to the commuters, depriving them of a reliable medium to cross the river.

Minister for Physical Infrastructure and Transportation Raghubir Mahaseth has committed to take action against Pappu Construction for its incompetence and negligence. The contractor is responsible for delaying numerous developmental projects across the country.

It took 11 years to build this bridge over Bagmati!

SINDHULI, April 22: The construction of a concrete bridge over the Bagmati River connecting Sindhuli and Makwanpur has been completed... Read More...