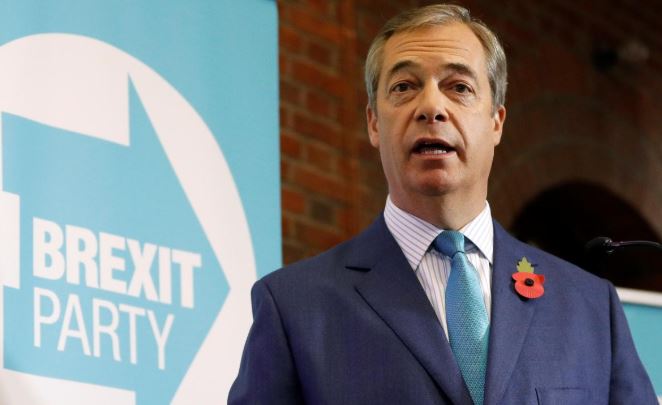 LONDON, Nov 1: Nigel Farage warned Prime Minister Boris Johnson on Friday that his Brexit Party would contest every seat in Britain in a Dec. 12 election unless he ditched his EU divorce deal and agreed to an electoral alliance of Brexit-supporting parties.

The first Christmas election in Britain since 1923 is highly unpredictable so an electoral alliance on either side of the Brexit schism could be a game changer after four years of political crisis that has shocked both allies and investors.

While Farage, a master at exerting maximum pressure on Conservative prime ministers by poaching their traditional voters, cast his demand as an offer of an electoral alliance although the Conservatives rejected it swiftly.

“He is trying to sell a second hand motor where he has polished up the bonnet but actually underneath nothing has changed and it is Mrs May’s appalling surrender treaty,” Farage said, referring to the deal former Prime Minister Theresa May struck.

If Johnson, who confounded his critics by striking a last-minute divorce deal with the European Union just two weeks ago, refuses the demand by Nov. 14, then Farage said his party would fight for Brexit voters in every seat in Britain.

“We will contest every seat in England, Scotland and Wales. Don’t doubt that we are ready,” Farage said.

Farage, who as UKIP leader helped force May’s predecessor David Cameron to call the Brexit referendum and then played a lead role in the campaign to leave the EU, said Britain’s exit from the bloc was now in peril.

Conservative Party Chairman James Cleverly said a vote for Farage would give Labour Party leader Jeremy Corbyn the keys to Downing Street and could end the entire divorce.

“A vote for Farage risks letting Jeremy Corbyn into Downing Street via the back door - and the country spending 2020 having two referendums on Brexit and Scottish independence,” he said.

“It will not get Brexit done - and it will create another gridlocked parliament that doesn’t work.”

Shunned by the British political establishment, Farage, backed by wealthy Eurosceptic financiers, helped sell Brexit to millions of voters in England and Wales who felt ignored by the mainstream Conservative and Labour parties.

Farage on Friday effectively declared war on both major parties, vowing to fight for leave voters across Labour seats across the English Midlands and the north as well as in Wales.

“The Brexit Party poses a very major problem to Labour,” he said.

A former commodities trader, Farage has transformed British politics over the past decade by poaching Conservative voters to put pressure on a succession of prime ministers towards ever tougher positions on Europe.

Cast by his supporters as the godfather of Brexit, he proposes what he calls a “clean break Brexit”, which means the type of no-deal exit that many international businesses and banks say is their nightmare scenario.

“This is something that crosses all traditional loyalties and divides and it’s why the only way to get Brexit done is to form a ‘Leave’ alliance and to win this election with a big stonking majority.”

Farage’s enemies say he sells a vision of a Britain that never was to insecure voters challenged by globalisation, though opponents admit that the failure of the main parties to address concerns over immigration allowed him to win voters.

British PM Johnson: I expect a certain amount of criticism as PM