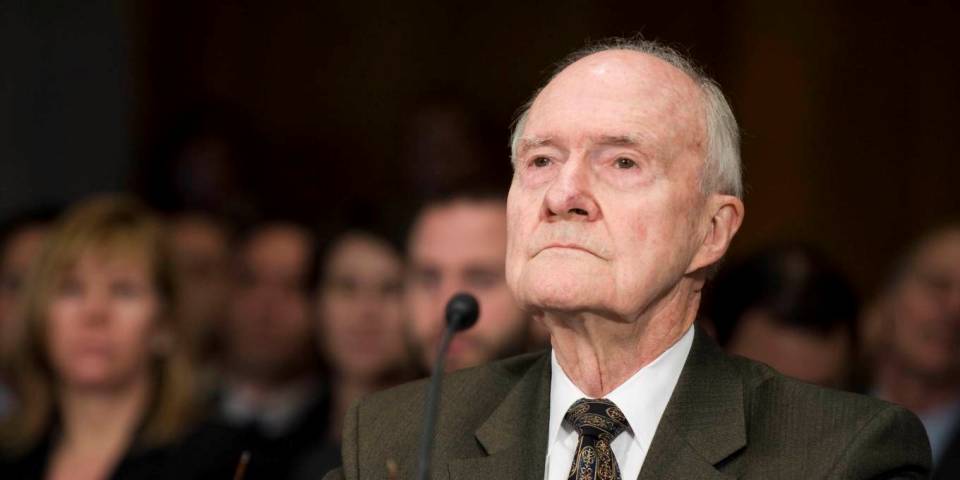 At a time when US President Donald Trump has run through four national security advisers in four years, and seems unable to distinguish national interest from his personal interest, Brent Scowcroft's legacy is more relevant than ever.

CAMBRIDGE – Brent Scowcroft, who died on August 6, aged 95, was the model of a modern lieutenant-general. A graduate of West Point whose career as a fighter pilot was cut short by a broken back suffered in a P-51 Mustang crash in 1949, Scowcroft went on to serve three presidents and advise others. He was the national security adviser to Presidents Gerald Ford and George H.W. Bush, and, to this day, when scholars and practitioners discuss the best way to organize the National Security Council, they invariably refer to the “Scowcroft model.”

Scowcroft was famously fair-minded and believed that his job was not to lobby for a particular policy, but to make sure that the president was aware of all opinions in his government, and that all key advisers felt that their voices had been heard. Beyond his concern for establishing an orderly process, Scowcroft was devoted to public service. The concept of duty he learned as a cadet at West Point was reinforced by his Mormon faith.

While loyal to his presidents, Scowcroft understood that his oath to uphold the Constitution implied a higher duty. A quiet and self-effacing man, he eschewed publicity while in office and focused on efficacy. He had a reputation for integrity that extended well beyond his office.

For example, in the early 1980s, when Scowcroft was out of office, Americans were deeply divided over foreign policy along partisan lines. When I was talking to foundations about supporting the creation of the Aspen Strategy Group, a bipartisan group that would try to bridge the gap, they said it would work only if we found Republican and Democratic co-chairs whose personal integrity was so obvious to members of both parties that we could overcome the partisan schism.

Scowcroft was the gold standard for personal and policy integrity, so we chose him as the Republican (and William Perry as the Democrat). The group has succeeded and exists to this day. Although he was self-effacing, Scowcroft had strong policy views that were informed by his realistic morality and his prudence. When I surveyed the 14 American presidencies since 1945 in my recent book Do Morals Matter?, I found that the George H.W. Bush administration ranked in the top tier of moral and effective foreign policies.

Bush and Scowcroft were concerned about avoiding disaster in a world that was changing dramatically. Ending the Cold War and keeping a reunited Germany in NATO without a shot being fired was an extraordinary accomplishment. In their co-authored 1998 memoir, Bush and Scowcroft noted modestly that, “What Harry Truman’s containment policy and succeeding administrations had cultivated, we were able to bring to final fruition.” They avoided hubris and triumphalism and steered clear of what might have been a disastrous storm.

As they put it, “The long-run framework of Bush foreign policy was very deliberate: encouraging, guiding, and managing change without provoking backlash and crackdown. In the short run, the practical effort included as well a certain amount of seat-of-the-pants planning and diplomacy. We eluded the shadow of another Versailles.”

While Scowcroft was personally close to the Bush family, he did not hesitate to criticize the younger President George W. Bush when he felt that he had gone astray from prudential values. While Scowcroft had strongly supported the elder Bush’s use of force (with the support of the United Nations Security Council) to expel Iraqi forces from Kuwait, he believed that the invasion of Iraq being planned by the younger Bush in 2002 was a mistake that would turn the region into a cauldron.

In August 2002, Scowcroft published an article in the Wall Street Journal expressing his opposition. He did not pretend to invoke the father, and it was an awkward moment for him, but he felt he had to speak out. Years later, during a hike in the mountains of Aspen, Colorado, I asked him about the relationship between Bush father and son. His reply was that the only way to understand it was to read Shakespeare. That was not your usual military or bureaucratic answer.

At a time when the current president has run through four national security advisers in four years, one of whom, John Bolton, has described his experience as serving a man who could not distinguish the national interest from his personal interest, the Scowcroft legacy is more relevant than ever. He remains the model for a modern public servant.

Joseph S. Nye, Jr. is a professor at Harvard University who co-chaired the Aspen Strategy Group with Brent Scowcroft. His latest book is “Do Morals Matter? Presidents and Foreign Policy from FDR to Trump” (Oxford University Press, 2020).

Kim looking to 'achieve results' in 2nd summit with Trump

‘No deal’ behind pastor Brunson’s release from Turkey – Trump

ANKARA, Oct 13: No deal was struck between Washington and Ankara for releasing pastor Andrew Brunson from Turkish prison, US... Read More...