Base rate remains stagnant in first quarter, leaving less room for banks to cut interest rates on loans
KATHMANDU, Nov 24: The interest rate of bank loans is less likely to fall in the second quarter of the current Fiscal Year 2019/20. Rather, some of the commercial banks may raise their lending rates.

As the base rate of majority of banks has not fallen much in the first quarter, the credits expanded by them will not get cheaper for the borrowers in the following quarter.

This spike in the base rate of those commercial banks will also drive up interest expenses for the borrowers as banks tie up their lending rates to the base rate.

By adding a certain percent premium on their base rates, banking institutions fix their lending rates to the clients. Premium rates tend to vary from bank to bank.

Even the government-owned banks which were on a comfortable liquidity position until recently have observed a rise in their base rates in recent quarters. Rastriya Banijya Bank Ltd (RBBL)—a fully-owned government bank—was offering comparatively lower interest rates to both depositors and borrowers.

However, in the first quarter of the current fiscal year, it decided to raise interest rates for savings and fixed deposits closer to what other peers are offering. The move of raising savings rate increased its cost of fund, driving up the base rate by 1.1 percentage point to 6.6 percent in the first quarter.

Base rate is calculated on the basis of expenses that banks made on deposits, cash reserve, statutory liquidity and operational cost.

“We decided to raise the return rate for savings as we could not stay aloof from the market where there is stiff competition to get the deposits. The competition was threatening our own deposits,” Kiran Kumar Shrestha, the RBBL CEO, told Republica. “The decision to increase saving rate also caused the base rate to spike. The higher interest rate environment is here to stay for some time,” he said. He, however, said that the bank would not pass on the rise in the base rate to borrowers. “We have a policy to adjust the rise in the base rate by reducing the premiums so that borrowers do not have to shoulder the burden,” he added.

The base rate of Nepal Bank Ltd (NBL)—another government-owned bank—also edged up 0.81 percentage points to 7.84 percent. Agricultural Development Bank Ltd, however, was able to lower the base rate to 10.18 percent from 10.58 percent.

Business leaders say that the increasing interest expenses discourage them from borrowing from banks and make investment. “Banks have not lowered their lending rates. They have not increased interest on deposits thanks to the gentleman agreement they make through the Nepal Banker Association. However, the lending rate continues to rise. Banks are profiting at the expense of borrowers,” a private sector leader told Republica. “The higher borrowing cost is hitting investments. This is likely to have an impact on the growth,” he added. 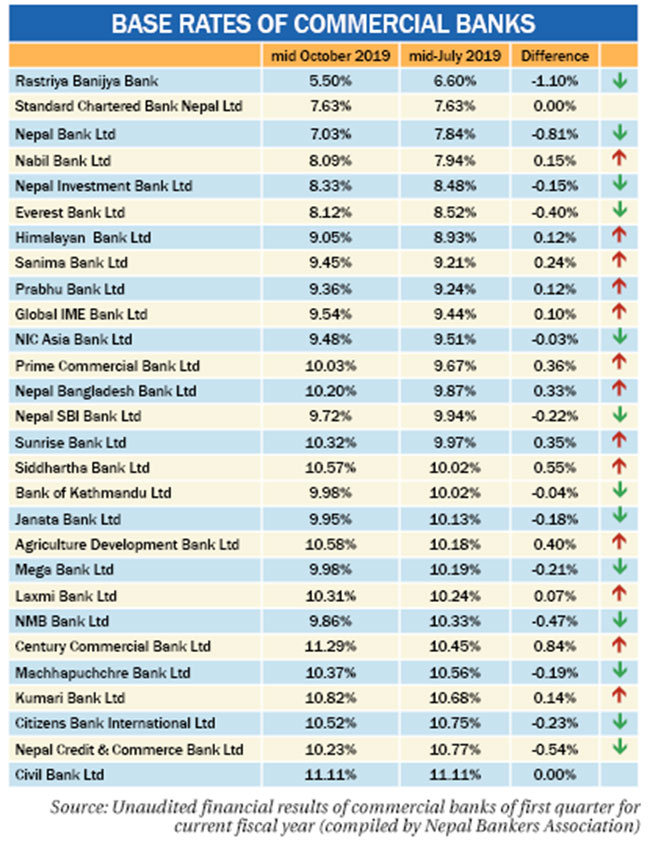 Commercial banks’ deposits up Rs 26 billion in a week

KATHMANDU, Sept 22: It has been revealed that commercial banks have collected Rs 26 billion in deposits in the last... Read More...