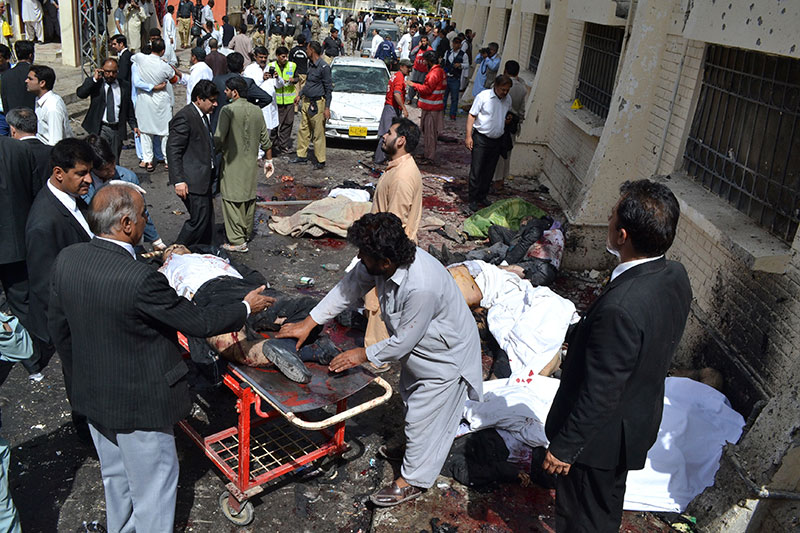 People help victims of a bomb blast in Quetta, Pakistan, Monday, Aug. 8, 2016. A powerful bomb went off on the grounds of a government-run hospital Monday, killing dozens of people, police said. (AP)

QUETTA, Pakistan, Aug 8: A Pakistani doctor says the death toll from the suicide attack on a hospital in the southwestern city of Quetta has further increased to 63.

Abdul Rehman, the director of the Quetta Civil Hospital, says they are also treating 92 wounded people following the explosion at the state-run hospital.

He says most of the victims of the bombing are lawyers. No group has so far claimed responsibility for the attack in the Baluchistan provincial capital.

A powerful bomb went off on the grounds of a government-run hospital in the southwestern Pakistani city of Quetta on Monday, killing at least 42 people and wounding dozens, police said.

The blast took place shortly after the body of a prominent lawyer killed in a shooting attack earlier in the day was brought to the hospital, said senior police official Zahoor Ahmed Afridi, though it was unclear if the two events were in any way connected.

Nearly 100 lawyers and other people had gathered there at the time, he added.

No one immediately claimed responsibility for the blast, which struck at the gates of the building housing the emergency ward, on the hospital grounds. Earlier, police had mistakenly said the bomb struck the hospital's main gate.

Sanaullah Zehri, the chief minister in the Baluchistan province, said it seemed to be a suicide attack, but police were still investigating.

Sarfraz Bugti, the provincial interior minister, denounced the attack as an "act of terrorism." A Pakistani news channel reported that one of its cameramen was also killed in the blast.

It was also unknown who was behind the killing of the lawyer, Bilal Kasi, who was gunned down on his way to court earlier in the day.

Local TV stations broadcast footage showing people running in panic around the hospital grounds. Afridi said most of the dead were lawyers who had gathered after Kasi's body was brought to the hospital.

Prime Minister Nawaz Sharif strongly condemned the blast in Quetta and expressed his "deep grief and anguish over the loss of precious human lives" in the attack, in which several senior lawyers were also killed.

"No one will be allowed to disturb the peace in the province that has been restored thanks to the countless sacrifices by the security forces, police and the people of Baluchistan," he said in a statement. Sharif asked the local authorities to maintain utmost vigilance and beef up security in Quetta.

He also instructed health officials to provide the best treatment possible to those wounded in the attack.

Baluchistan has long been hit by insurgency. There are several ethnic Baluch separatist groups operating in the resource-rich province, but al-Qaida and other militant groups also have a presence there.