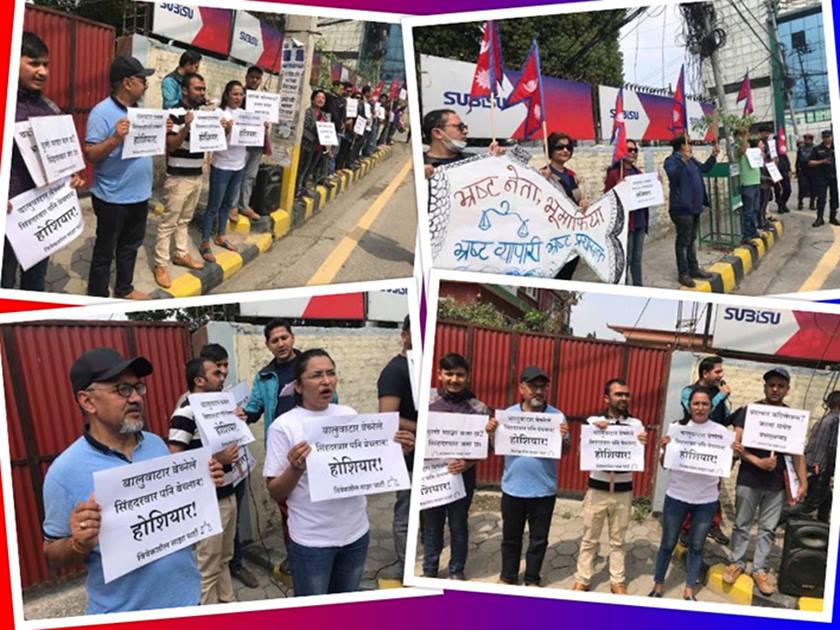 During the demonstration, leaders and cadres of BSP urged the government to book the ‘big fish’ involved in corruption cases related to Lalita Niwas land grab and Hotel Hayat Regency’s ownership transfer.

The protestors displayed placards in their hands reading slogans as “Be aware!! Those who sold out Baluwatar may also sell Singhadurbar”, “Big fishes are where the Singhadurbar is” and among others.

The BSP’s anti-corruption demonstration comes at a time when the government agencies have started to investigate into the big scandals including Lalita Niwas land grab case.

The government said last week that it barred transaction of Lalita Niwas land at Baluwatar on the ground that it was acquired through various machinations.

The Ministry of Land Management, Cooperative and Poverty Alleviation banned transactions in the land after concluding that a group of erstwhile owners, land revenue officials and the 'land mafia' had managed to lay hands on 114 ropani of the land in questionable fashion.

A preliminary study conducted by the government shows irregularities while registering ownership of the land.

The restriction on transaction applies to land including that owned by Bhatbhateni Super Market and land being used by the NRN association for building its headquarters. It has already come to light that both Bhatbhateni and the NRN association procured the controversial land from the family of then Prime Minister Subarna Shumsher Rana and the land mafia. The Rana family had already relinquished the land to the government against due compensation.

According to a probe panel headed by former Secretary Sharada Prasad Trital, of the total Lalita Niwas land acquired by the government from the Rana family during the Panchayat era , 113 ropani 3 aana ended up back in their hands and they sold the land to others. The remaining 12 ropani seven aana two paisa was distributed during the Panchayat era and another 3 ropani 12 aana three paisa was donated to Pashupati Tikinchha Guthi.

The government decided to register the land in its own name a month ago.

The Central Investigation Bureau is investigating the matter to trace who were responsible for deflecting the government-owned land.