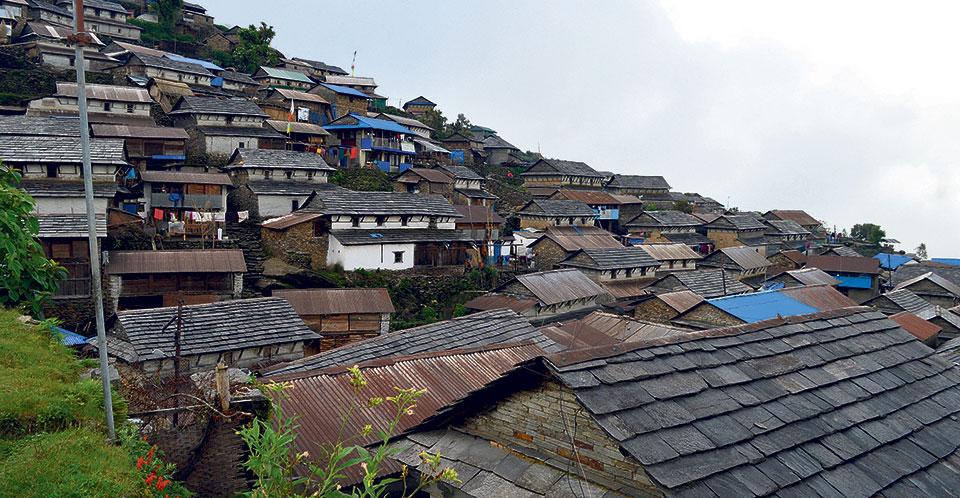 LAMJUNG, March 18: Bhujung of Lamjung attracts many tourists annually. Considering the ongoing initiatives towards maintaining cleanliness, residents feel that the place would attract more even more tourists and extend the duration of their stay.

“Bhujung has always been our pride. It has been the major tourist spot in the district. With our ongoing campaigns, we expect the numbers to multiply in the days to come,” said a Bhujung resident and president of Yumbo Development Ama Samuha, Ashakumari Gurung.

So what has the village done to hope for the dramatic surge in the number of tourists? According to Gurung, cleanliness is the latest goal of entire locals.

“This was never that a polluted place. However, we did have room to improve sanitation and hygiene practices around. Residents have made efforts to keep the village tidy and fresh,” she explained.

On Sunday, Bhujung was declared ‘completely clean town’ amid a formal function. Representatives of local bodies from Lamjung and Bhujung residents delivered speeches on the occasion.

“It has been declared completely clean town after minutely reviewing toilet usages, water availability, hand washing habits of the residents, waste management arrangements in the locality, among others,” Gurung said.

According to Lokraj Pandey, Chief of District Coordination Committee, cleanliness drive was carried out in Bhudung during the last few months and said that the campaign has given good results.

“The drive was to sensitize people on the importance of maintaining immaculate cleanliness in their locality and change the face of the village. It tried to make the residents aware that they have to actively embrace cleanliness and hygienic habits for their welfare and for promoting tourism activities,” he said.

Many locals in Bhujung operate homestay services. However, in the lack of awareness and resources, they were not able to ensure ‘the quality tourists would expect.’ “But now, you can see for yourself, and a huge change has come,” Pandey said.

Roads have also become better in Bhujung. Some have been widened and blacktopped while some others are repaired. Similarly, hotels, restaurants, and households have been directed to keep their areas very clean. “Visit any nook and corner, and you will find no dirt. Every part of the town is neat and clean,” Pandey stated.

One of the huge attractions for tourists in Bhujung is the houses. Its mud and stone houses with tile roofs give the village a typical and authentic look. As a part of the cleanliness drive, the locals have cleaned their house roofs and retouched their home walls as well in a bid to make the town more attractive.

“It was our mutual effort. Everyone was confident that we would succeed in providing a different look to this town. So we worked together,” says Gurung. She added that the change is going to last as that’s what the locals want.

Prem Bahadur Ghale, the chairperson of Sothar Rural Municipality, stressed that local’s concern and the initiative was taken for improving the environment in their locality is praiseworthy. “Our development and prosperity depend on the tourism industry. And for that, it is essential that we keep our towns and villages very beautiful in all terms,” he said. “We don’t welcome tall buildings or big infrastructure. We want to keep our simplicity and originality intact so that more and more tourists come here and enjoy our authentic,” he said.

According to assistant CDO of Lamjung Kajiman Sunar, Bhujung has set an example for others. “It is not an exaggeration. Bhujung has taught all other villages and towns in the country, mainly those who are losing their beauty to haphazard development,” he said.

Annapurna Conservation Area Project (ACAP) representative Rajkumar Gurung lauded locals’ participation and efforts. Stating that aware and responsible public alone can ensure sustainable development. “They have embraced all the cleanliness practices in their locality. This is a pleasant thing to happen,” he said.

He also informed that all the areas within the ACAP range have become far cleaner than in the past. “And we look forward to continuing supporting such noble deeds,” he said.

Speaking at the program, several local representatives tried to shed light on the challenges as well. They said that though villages are very clean nowadays, it might be not easy to maintain it in the future.

“We want our town to be charming and clean. Everyone appreciates such intiatives. But we have to ensure the sustainability of such a program. Cleanliness should turn into our habit, and not just a campaign,” said Nauraj Gurung, president of Laliguras Youth Club. There are around 400 households in Bhujung.

Over 3,000 benefitted by drinking water in Beshishahar

LAMJUNG, Jan 27: More than 3,000 people of 300 households at Bhakunde in Lamjung have availed drinking water facility after... Read More...

Nepal can be new melting pot for tourists, traders and investors: PM Deuba

Arrival of Chinese tourists on an upward spiral