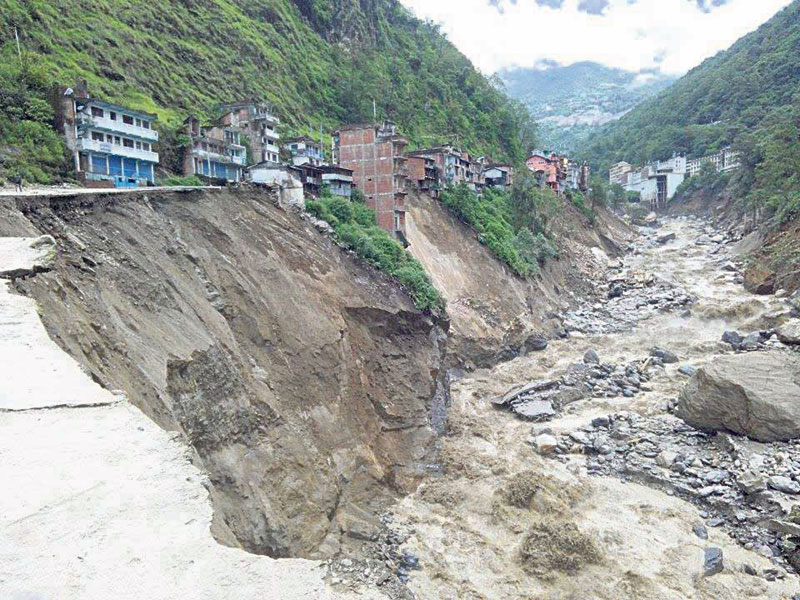 SINDHUPALCHOWK, July 7: Locals of Tatopani VDC in Sindhupalchowk district are still gripped by fear of flooding although the water level in the Bhotekoshi River receded on Thursday.

“Incessant rainfall since Thursday morning has made locals fearful of flooding despite a decrease in the water level,” said Inspector Khum Lal Bhusal of Area Police Office (APO), Kodari. The water level in the Bhotekoshi has decreased although it is still above the normal level, he said.

According to him, damage from flooding has increased significantly. The chances of nearby houses being wash away  remain high.

Some sections of Tatopani-9 are at high risk, according to him. Some 100 households in the area are being relocated, he further informed.

Flooding washed away five additional houses on Thursday. More than 21 houses have been washed away and  there has also been considerable damage to schools, hydropower projects, vehicles, and the Barhabise-Tatopani section of Araniko Highway over the last few days. Deputy Superintendent of Police (DSP) Manoj Thapa of the Armed Police Force Tatopani Base Camp said about 200 families have been displaced due to flooding.

Most of the victims have demanded that the District Administration Office take them to Kathmandu. As the main highway from Tatopani has been obstructed due to landslides, some of the displaced have headed for the capital on foot.

A meeting of the District Disaster Relief Committee (DDRC) has decided to help the victims reach the capital as per their wish. “Victims would have to walk a certain distance but we will make transportation available to take them to Kathmandu,” said Chief District Officer (CDO) and DDRC chief Gokarna Mani Dawadi.

“We’ll provide locals with food and shelter if they want to remain in Tatopani,” said Dawadi, adding that the DDRC has enough food stocks for two weeks.

Home Minister Shakti Basnet, who visited Sindhupalchowk district on Wednesday to survey the damage, has not been able to reach the affected areas as bad weather prevented his helicopter from landing. He has directed immediate rescue operations.