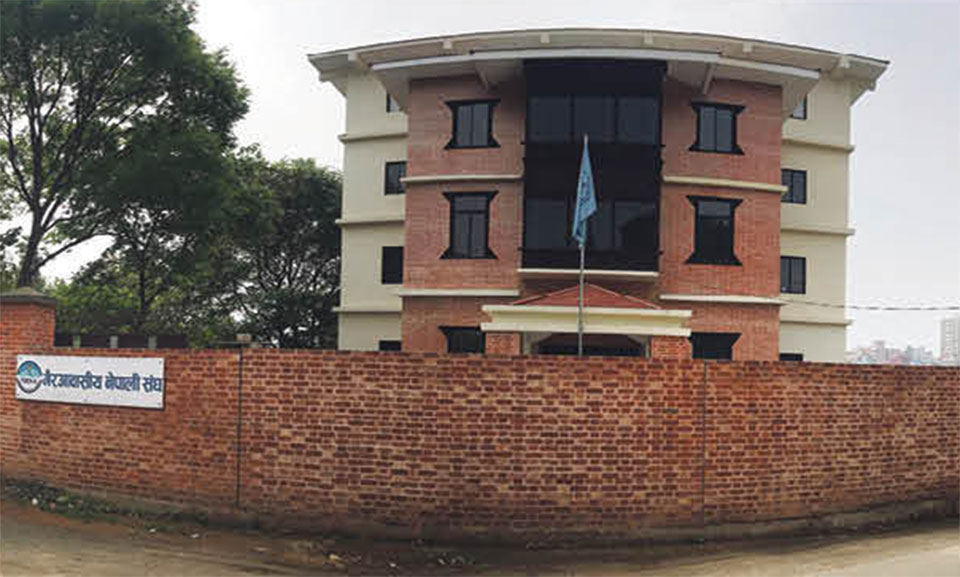 KATHMANDU, April 7: It has come to light that a huge portion of land once attached to Lalita Niwas at Baluwatar is now in the possession of Bhatbhateni Super Market and the Non-Residential Nepali Association (NRNA). While Min Bahadur Gurung, the supermarket proprietor and his relatives own 60 ropani of the land, NRNA has three ropani one paisa.

According to sources at the Commission for Investigation of Abuse of Authority (CIAA) and the Central Investigation Bureau (CIB) of Nepal Police, physical infrastructures were erected after those then associated with LalitaNiwas sold off the land to other private parties. These transaction were made possible by officials at the Land Revenue Office at Dillibazar although Lalita Niwas had already been acquired by the government with payment of due compensation to the Rana family that owned it.

Gurung purchased the land from the Rana family while NRNA got hold of its plot from Ram Kumar Subedi and Dr Shovakanta Dhakal, who have been linked with the entire land scam as key players.

The 60 ropani acquired by Bhatbhateni has been registered under single or mutual owners.

Sources also disclosed that members of the Rana family have transferred some of the land to the so-called land mafia as well as then officials and staff of the Land Revenue Office. The sources affirmed that the investigations are aimed at bringing all the transacted land back under government ownership.

Then prime minister Sushil Koirala had inaugurated the NRNA building standing on the Niwas land in 2072 BS. Shesh Ghale, then the NRNA president, stated that the land and building were worth over Rs 300 million.

Sudhir Shah, who is currently an election commissioner and was earlier a land revenue officer in Bhaktapur, has been listed among those who helped dispose of the government land. According to high level sources, the Shah family also owns two ropani of Lalita Niwas land and this is now under investigation.

"The investigations are directed towards collecting all the evidence and bringing those engaged in wrongdoing to book," high-level sources at CIB and CIAA said. "No matter what their political connections or influence , those who have grabbed state property will be brought to justice," they said.

Officials serving at the Land Revenue Office Dillibazar when LalitaNiwas land got registered under private owners are under acute scrutiny by police and the CIAA team involved in the probe.

As per information shared by the sources, Rukm Shamsher, Shailaja Rana, Sunita Rana, Heman Shamsher and Hatak Shamsher -- all relatives of Subarna Shamsher--had regained control of part of the land with the collusion of land officials and sold off 60 ropani to Bhatbhateni proprietor Min Bahadur Gurung and his family. Some other plots were sold to the 'land mafia'.

According to documents acquired by Republica, over 60 ropani of the land was sold to different people, with officials at the land revenue office facilitating the transfer. CIB and the CIAA have been probing the matter.

Plots of the land sold by the Rana family to the Gurung family have been registered under the names of Min Bahadur, his son Kalyan and Bhatbhateni Developers separately. Similarly, there is evidence of mutual ownership of some of the land by Min Bahadur, Shovakanta and Ram Kumar.

“Documents show that the Gurung family took over the 60 ropoani in 2003 from the Rana family and NRNA came to occupy a small portion years later. The three ropani occupied by NRNA lies in both the land now belonging to Bhatbhanti and some other plots. Official records show these plots as government land cultivated by tenants.

KATHMANDU, April 27: Minister for Land Reform and Management Padma Aryal said that the government will not seize the land... Read More...