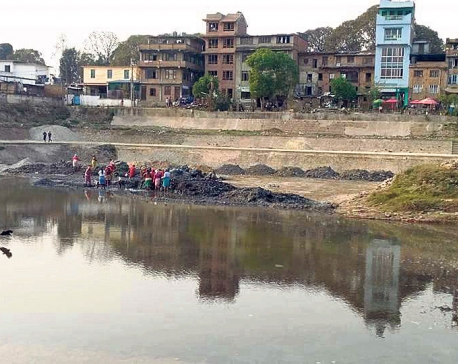 Bhaktapur, March 12: A study has come up with primary fact that the 'Bhajya' or Bhaju Pokhari (pond) based in Bhaktapur municipality-1 was 500 years ancient than the Ranipokhari of Kathmandu.

At a launching of preliminary report on the renovation of historical Bhajya Pokhari on Monday, a study on the excavation found that the pond was built in the 12th century.

He also claimed Kathmandu's Rani Pokhari was built in 1727 BS (790 Nepal Sambat) some 348 years ago being impressed from the Bhajya Pokhari.

The study has also come up with the facts that the mega earthquake that occurred at Nepalmandal in 1738 BS during the time of Jitamitra had broken down the Shikhar styled temple of Bhajya Pukhu, Dr Shrestha said.

Precious goods and metals were found in course of excavation initiated in 2059 BS and reconstruction by the municipality in 2074/75 BS, he said, adding the study also has revealed the Pokhari had an idol of Jaleswor in the Shikhar-styled temple in its mid part.

On the occasion, House of Representatives member Prem Suwal said several heritages have gone collapsed in lack of conservation efforts and called for ending the practice of privatising public properties to protect the heritages.

He also stressed the need to carry out study on the historical perspectives of heritages and take ahead the renovation and reconstruction works accordingly.

Also speaking on the occasion, Bhaktapur Mayor Sunil Prajapati pointed out the need to have intensive study and rigorous discussion to validate the preliminary finding that Bhaju Pokhari was 500 years ancient than the Rani Pokhari of Kathmandu.

The Bhaktapur municipality has started renovating the heritage. RSS

NAWALPARASI, Jan 23: Remains of an ancient pond and a Buddhist vihara have been found at the Ramgram Stupa in... Read More...

BHAKTAPUR, Aug 2: A fire broke out at Bhakatapur-4 Mahalakshmisthan in the district on Tuesday. ... Read More...