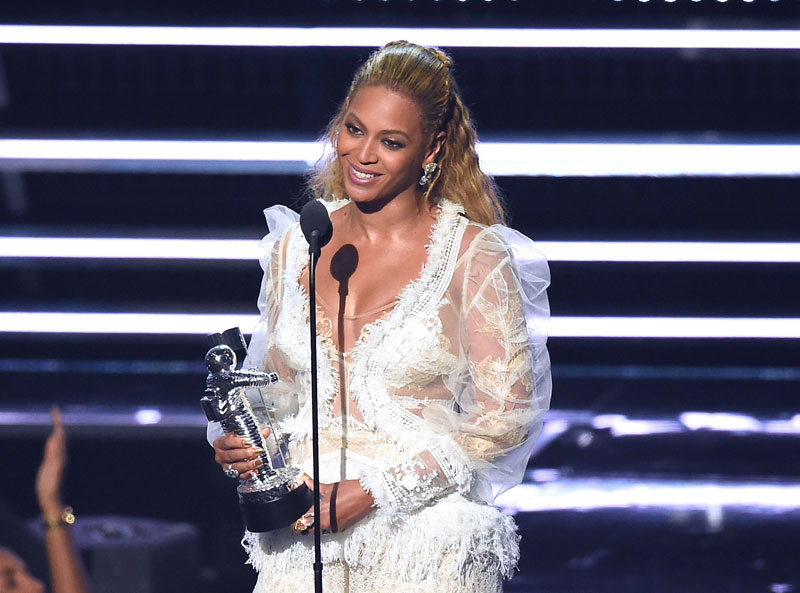 NASHVILLE, Tenn. Aug 29: Sunday's MTV Video Music Awards show was all about performances that got the sweat dripping, the muscles ripping and the adrenaline pumping. Here are the top moments from Sunday's show:

If there was any doubt that this night was all about Beyonce, she killed any notion of that idea with her amazing medley of songs from her incredible "Lemonade" visual album.

As the leading nominee, all eyes were on her to prove herself as the biggest musical act of her generation.

And as usual, she delivered a flawless performance.

She moved seamlessly between outfits, songs and stages, singing with passion and strength. She danced through fire and smoke, took a baseball bat to a camera and had her dancers end the performance laying on the stage to symbolize the power of women. Mic dropped.

KANYE MAKES A CASE FOR 'FAMOUS'

MTV has learned it's better to give Kanye West the microphone than risk him taking it from someone else.

West, who famously jumped on stage to interrupt Taylor Swift at the VMAs in 2009, didn't perform, but instead took the time to explain his controversial music video "Famous."

He referenced back to his own past antics when he acknowledged that his music video might lose to Beyonce in the video of the year category. (It did.)

He made sure to reference several people whose images appeared in the video, including his former girlfriend Amber Rose, his wife's ex Ray J and his perennial target, Swift, who was not there.

Any artist would have a hard time trying to match a Beyonce performance of this magnitude, but the multifaceted R&B singer Rihanna proved she could hold her own over the course of four separate performances throughout the show.

Rihanna, who was given the Michael Jackson Video Vanguard Award, worked her way through her multitude of hits, from "Please Don't Stop the Music," to "Work" and "Diamonds."

It was like a walk back through her musical career over the past decade. And then at the end, she gracefully accepted the award from a gushing Drake, who declared his love for her, and talked about winning the award for her home country of Barbados.

WAIT, WHO IS TEYANA TAYLOR?

You won't be asking that again.

After West's speech, he introduced his music video for "Fade" featuring singer Teyana Taylor, who is signed to West's GOOD Music label.

In an homage to "Flashdance", the athletic Taylor — dressed like a boxer — danced in a revealing outfit, shining with moisture among heavy weight machines and punching bags. Even her husband, NBA player Iman Shumpert, appeared in the video in a shower sex scene.

The strange, sexy video was the talk of Twitter with plenty of women and men gaping over her incredible figure, which is all the more incredible because she gave birth to her daughter less than a year ago. Those are some major workout goals.

Between the real-life Olympic athletes to several athletic-themed performances, the VMAs felt like an Olympic rerun.

For starters, gold medalist swimmer Michael Phelps revealed that he was listening to the rapper Future when he made the now-famous angry glare seen around the world during the Olympics.

And four members of the Final Five gymnastics team fan-girled out onstage when they got to hand over the award to Beyonce for best female video.

Finally, Jimmy Fallon impersonated swimmer Ryan Lochte, making false claims on his musical accomplishments — a reference to the accusation that Lochte filed a false robbery report while in Rio.

No one wants to follow Beyonce, but if you're going to phone in a performance, you might as well do it when nobody is paying attention.

This was Britney Spears' first VMA performance in a decade, and she's got a long history of creating big moments on the awards show.

Instead she mechanically went through the rhythms in a low-key duet with rapper G-Eazy, in which they tried to force some chemistry that just wasn't there.

"Do not impose tax on my period" (Photo feature)
15 hours ago
National Assembly passes Appropriation Bill, 2021
22 hours ago
'No changes made in the tax imposed on sanitary pads in new budget'
14 hours ago
Nepal recorded a BoP deficit of Rs 38.75 billion during mid-July and mid-August
7 hours ago

Nepal feels like home to me: Afridi
1 hour ago

Grants for unemployed women
1 hour ago

Child goes missing in a drain in Kathmandu. Who is responsible?
2 hours ago

All citizens will be vaccinated against COVID-19 by mid-May: PM
3 hours ago